Every year I get to ponder formally on the figure of the magician. I say ‘formally’ because, for the purpose of writing or teaching, I dive into exploring new insights about what magic is, and why we are fascinated with performing it. Right now I’m sitting with magic thoughts for the upcoming course in Cards and Magic, and the first thing that I think about – that I didn’t think last year or the year before when I sat with this material – is that there’s a particular aspect of the magician and the magician’s skills we’re seduced by. It has to do with seeing IT. How do we see IT – a new job, lover, high standing position, a slim figure, or many figures in the bank account?

By the simple standard of seeing IT, even Trump is considered to be a magician, though, in my own evaluation I would’t stretch it so far. Trump is not a magician. He is just a lucky and loud conman. He is no better at magic than the psychopath who constantly yells about his professionalism, yet without ever demonstrating any real skills beyond lung power and a high pitched proclamatory voice: ‘I’m a psychopath. Appreciate my honesty. Now give me your money’ – all of this not even original… Some people say, ‘awesome’, appreciating the psychopath’s honesty and ‘vulnerable story’, because there’s always one to sell, and it’s good that plagiarism rules, because being original is too disturbing.

At the other end of the spectrum, being a magical person is not quite like Marcovaldo either, Italo Calvino’s most beloved fictional character from the collection of stories entitled Marcovaldo, who is very much like the Fool in the Tarot: lucky and honest too, yet performing feats of scheming magic that are the inverse of the situation. In one of the stories, in his enthusiasm for mushrooms in the city, Marcovaldo ends up intoxicating the whole neighborhood, sending them all to the hospital where they can have their stomachs pumped. The narrators in Calvino’s other book, The Castle of Crossed Destinies, are more magical than Marcovaldo because they’re aware of the feats of meta-narrative they’re creating, while engaged in captivating the audience with their stories of the impossibility of muteness and the voice of the Tarot – I’ve just enjoyed greatly returning to this book in connection with writing about it in my own latest book, Tarot Tracings, launched last month.

Now, why am I mentioning these fictional characters? – and yes, Trump and the archetype of the psychopath fall into the category of the fictional, as it’s not really their problem that people believe their real, con activities. I’m mentioning them because they share something with the magician, the one that can stop the winds in their tracks or raise the dead. Trump and Marcovaldo are good making their bullshit visible. We’re not here with just this mantra: ‘If you can think it, it exists.’ We’re here with this version: ‘If you can see it, it exists.’

Making others see IT is a most magical act, even though IT may indeed be nothing other than clever slight of hand. Calvino was perfect at this skill. It doesn’t matter what stories he tells, you can see everything. Not only that, but the story is so vivid that it makes you roll on the floor, with a huge belly ache from incontrollable laughter. I can spend a whole box of tissue when I read about Marcovaldo. I scream so hard that my eyes and nose forget what their purpose is. It doesn’t even matter that I’ve read the same story more than ten times. I have a fit every time simply because every time I read the story, I can see everything right before my eyes. I see IT.

Now, let’s get to the point. A lot of writer magicians will tell you that most of the magic they perform is in manipulating with mechanisms of identification. If you can identify with it, you’re not only IT itself, but you’re also IN. That’s why the ‘relatable story’ is as successful as the ‘vulnerable story’. People go, ‘me too’, I’ve also …. this and that. Well, there’s magic here, all right, but it’s the cheap kind.

What I’m thinking about is of a different order. The point is to see IT, indeed, but at the same time experience neither relating to IT, nor identifying with IT. I think Calvino understood the implication of this distancing, because it’s precisely this subtlety that makes the difference between the psychopath’s magic, the fool’s magic, and the magician-who-can-raise-the-dead’s magic. If you can observe IT while seeing every aspect of it without evaluating, then you experience a shift in your own intelligence where the thinking places you in the manifesting mode beyond petty interest.

Let me concretise, as this thinking here has actually been prompted by a discussion with a woman client and former student of mine. Although she can now read her own cards with astuteness, on occasion she sends me a string to check with me. She recently cast a pyramid of 6 Lenormand cards on the topic of change. She wants change: change of house and change of job. Fair enough. The trouble is that she is currently not supported in her desire by her partner. He wants to stay in the house and in the job he’s in right now. What is there to do? Since they have no children, the matter should be straightforward, but it isn’t.

In a relationship question, who gets the upper hand when two opposing views are challenged? In her case, if she stays in an unchanged situation for his sake, how will this help her? Rationally speaking, if my counsel is sought in such matters, what I look at first is power relations, then symmetry and balance. Who has the power to act? If the power to act for the good of all involved in the household is with him, then the other must bend her desire. Desiring a thing and acting upon it when the power to act is not present amounts to foolishness. Conversely, if the woman has the power to act for the greater good of all, then the man must bend his own wish for something different, or his wish for the maintenance of the status quo. Anything else amounts to stubbornness that breeds violence and abuse, whether verbal, physical, or psychological.

The woman sent me her cards with a sigh in her soul that I knew was there as soon as I saw the ‘magic’ of her words describing her predicament. It was a powerful sigh against herself. She said: ‘advantage and disadvantage’, in conclusion to seeing how, in spite of her desiring to be rooted in health and harmony (Tree at the top), and doing things towards the fortunate where the household is concerned (Clover, House), her enthusiasm for it is cut off (Sun, Scythe, Stork). ‘No’ to change, or new deliveries, the Scythe says. Yet change is coming…

What is there to do for the maintenance of harmony? From my position, I observe all this, and try not to pass any judgment, even though, her seeking my counsel was not for my magical brain, but rather for my collegial compassion. I’m tempted though to activate the seeing IT on her behalf, that is, seeing her in a new job and a new house, yet without the disadvantage that she is talking about.

How would I go about ‘fixing’ her cards? The moralists out there would be quick on the draw, telling me that I have no business to interfere. Maybe not, but if I did, so what? What would I be afraid of?

The gist of this talk here is to say that the first step towards the magic that’s better than Trump’s or Marcovaldo’s is say that if fearlessness is activated beyond moral concerns, then it has to be be result of seeing IT where IT is free of my involved affective and cognitive associations. The aim is to see IT past empty words and clichés. And why is this necessary? Well, look around. How many people do you know of, who got enflamed in their very involved desires, only to conclude in the end that that was not a good idea to wish for. I know many.

Now, however, seeing IT past the projections of some clichés requires high vizualization skills where the image is not merely the conjuration into picture of involved attachments to an outcome that’s motivated by personal gain and self-interest – we leave personal gain and self-interest to the ‘magician’ copying Trump’s strategies. Rather, a magician that’s not a conman has a different agenda. In my client’s case, I’d start with a change in metaphor, and then take it from there.

For inspiration with it, you’re welcome to join Cards and Magic, the special edition. In just 24 hours since the registration opened, 110 people signed up for it. We’re in for a wild ride, the Woodstock of cartomancy, as students in the first runs of Cards and Magic named what we’re doing here, and for good reason. Give it a go. You might learn how to distinguish between magical discourses and who gets to embody just what real or fake imaginations. 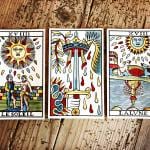 April 24, 2020
Concepts at odds: the intuitive, the spiritual, the plain clear
Next Post 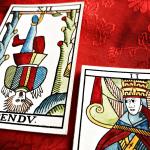 May 21, 2020 'His heart is not up to speaking' – divination and depressive states
Recent Comments
0 | Leave a Comment
"It was really helpful to see you literally lay out the many different messages you ..."
Laurie READING DIRECTION IN LENORMAND
"You're welcome."
Camelia Elias Playing cards for risk analysis
"Great article on working with Playing Cards. Thank you Camelia!"
CaitrionaReed Playing cards for risk analysis
"Timely. A good reminder (for me) that, ultimately, what is being preached is based on ..."
Beverly Frable The dead serious occultist in the ..."
Browse Our Archives
get the latest from
THE CARTOMANCER
Sign up for our newsletter
POPULAR AT PATHEOS Pagan
1