What I Won’t Write About Mary Daly for the Encyclopedia 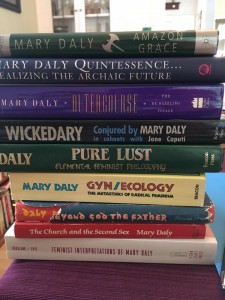 I’m writing an article on Mary Daly for the forthcoming Encyclopedia of Philosophy of Religion, and keep thinking of all the things I want to write about that aren’t appropriate for academic publications like that. The personal, quirky, maybe even mystical things …

Like how I found an old copy of Beyond God the Father at a used bookstore when I was in high school in the 1980s, and inexplicably bought it. It was inexplicable because at that time I hadn’t yet discovered either the study of religion or feminism, but something led me to pick it up and hang on to it until I knew what I had. It has an inscription in it from its previous (original?) owner: “For Margie, With love, Sue.” I have no idea who these women are. But this handwritten note seems an entirely appropriate contribution to a book about creating and sustaining bonds among women as antidote to patriarchal religion.

I also keep thinking about how I cracked that book open as a religion major in college in the early 1990s, thinking I might be ready to understand it (I wasn’t) but discovered that Daly referred to process theology and Alfred North Whitehead several times, just at the time I was in a seminar on the topic. Those passages are still highlighted in pink. I quickly learned that wiser minds than mine had been on to the resonances between feminism and process theology for some time. I still didn’t quite get what else was really going on in that book.

Eventually, I took a class on the theologies of Rosemary Radford Ruther and Mary Daly as a graduate student in Claremont, wherein we read Daly’s entire corpus at the time (The Church and the Second Sex, Beyond God the Father, Gyn/Ecology, Pure Lust, Wickedary, and Outercourse) under the wise guidance of Marjorie Suchocki. I still recall one marathon day and night wherein I devoured all of Pure Lust on my futon bed, green pen in hand. I learned to appreciate so much about her work, about feminist theology, about language, and about myself by journeying through all of those galaxies, spinning and spiraling and weaving webs of wonder.

I can’t forget that I lent that old used-bookstore copy of Beyond God the Father to my now-husband when we were still dating in the mid 1990s, so he could get a good grasp of feminist criticism of religion and understand what I was doing in graduate school. He. Wrote. In. The. Margin. Of. My. Book. I was horrified! I overreacted and nearly shamed him out of finishing the book. Now, I kind of love that he did that … another connection inscribed in the pages of this worn, mystical book. 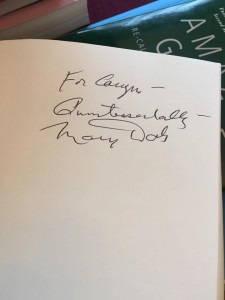 I won’t write in the Encyclopedia article that I got goosebumps when I finally was able to see and hear Mary Daly speak at two different meetings of the American Academy of Religion in the late 1990s. At one, she spoke about her forced retirement from Boston College (and I got a bumper sticker proclaiming “Sin Big” supporting “The Mary Daly Defense Fund”), and at the other she did a reading from Quintessence. I took notes in the book as she spoke (blue pen this time) and my spiraling marginalia reflect well her spiraling genius. It was at that session that I mustered up the courage to approach her to sign my book after the reading … I was totally fan-girling and stammered something silly like “thank you for everything …” and she just signed my book and handed it back.

I also probably needn’t tell the story about how I actually spoke to her on the phone once to explore the idea of bringing her to our campus to speak. She kept commenting on the light coming through her window. The campus visit never materialized but I saved a voicemail from her for years.

I certainly won’t write about how, after the publication of my book Two Reformers: Martin Luther and Mary Daly as Political Theologians, I dreamed about talking to her several times. I took it as a sign from the universe and sent her an inscribed copy of the book. I have no idea if she ever received it and I’m quite sure she never read it, since she died just a few years after that.

I won’t explain in the Encyclopedia how I first learned the word “cisgender” on Twitter amidst critics lambasting those who celebrated Daly’s life and work in memorial tweets and blog posts after her death in 2010. I knew the things she had said about transgender and transsexual people were problematic, but that moment became occasion for me to dive deeply into theories and experiences of gender identity that I now teach and write about much more effectively and I hope responsibly.

So I won’t write about these things in the Encyclopedia of Philosophy of Religion … because they aren’t the things that matter about the most consequential radical feminist philosopher of religion.

July 11, 2017
Recent Comments
0 | Leave a Comment
"They were all too aware of human perversions then and in the age before. Genesis ..."
Bob Shiloh How Gender Studies Transforms Religions
"I have Eve Wood-Langford's book in my personal library. I bought it because I was ..."
Walter Mattfeld The Most Interesting Chapter in the ..."
"You guys aren’t even close to Christians. You believe you’re better than Christ and can ..."
Kyle Racism, Sexism, & The Holiday Classics
"Even as a reverent agnostic, yet assuming a genuine divine revelation, I wonder how that ..."
John Gills How Gender Studies Transforms Religions
Browse Our Archives
Related posts from Caryn Riswold