So I Guess My Marriage Is Over Now 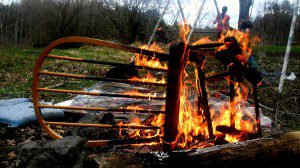 I’m in what is often called a “Mixed-Orientation Marriage,” which means that I am queer and my husband is straight. Naturally, now that same-sex marriage has received the official blessing of the Supreme Court of the United States of America, I will be compelled to get me to an annulment tribunal post haste. I mean, gay marriage is obviously a threat to all marriages, but to mixed-orientation couple’s it’s a death blow.

Only….er…um…wait a minute. I just remembered that I’m Canadian. Shoot. Apparently my marriage has been over for the past 10 years.

All snark aside, I do want to talk about the claim, which I often see circulated, that allowing same-sex marriage somehow invalidates marriages like mine. The argument generally seems to go something like this:

1. Mixed-orientation marriages is possible because sexual orientation is fluid, not fixed and immutable.

There are sometimes other variations, or in some cases there’s not really even an argument: just a bald assertion that, in some way, SSM threatens the marriages of gay folks who are married to straight spouses.

The flaws in this argumentation are sufficiently obvious that my ten year old could spot them, so the question that we have to ask is, why are adult people making this argument at all?

I think the answer is, unfortunately, fairly obvious. The underlying anxiety stems from a feeling that a mixed-orientation marriage is a kind of consolation prize for gay men and women (or, sorry, same-sex attracted men and women) who can’t get married to the spouses they really want but who still want the comforts and advantages of married life. The legalization of same-sex marriages threatens such unions because, simply, why would someone choose to eat gruel when there’s a nice, hot, sizzling peppercorn steak right there for the taking. SSM threatens MOMs because it makes the temptation of getting a divorce and marrying a same-sex partner that much more real.

Okay, fair enough, but here’s the thing: clearly the problem here is that people have been pushed into MOMs when SSM is what they really want. We know, from a handful of studies and a veritable mountain of anecdotal evidence that when gay people marry opposite-sex spouses in a desperate bid to change their sexual orientation, or because they want to please their family and religious community, it’s usually a disaster. A brief perusal of the stories posted at The Straight Spouse Network should give even the most avid supporter of ex-gay ideologies pause: it’s not just that such marriages cause a lot of internal conflict to the gay partner, they also tend to wreak devastation on the other spouse, not to mention the children. It’s not a good scene, and if the legalization of same-sex marriage will pose as a threat, or a deterrent, to people who are thinking of getting into marriages like that, great.

The reason that my marriage is not threatened by the fact that I live in a country where same-sex marriage has been legal for almost as long as I’ve been married, is that I am actually in love with my husband. He’s not a consolation prize, or a surrogate for the lesbian lover that I left behind. I married him because I wanted to marry him, not because I wanted to prove that I’d arrived on some ex-gay journey, or because I felt pressured into getting myself into a heterosexual marriage. My marriage isn’t a political performance. It’s just a marriage.

Moreover, I don’t regret it – and even if I were suddenly transported into an alternate dimension where the Catholic Church taught that God blesses same-sex love, I still wouldn’t regret it. My husband is my best friend – not in a cheesy, Hallmark sense but in the sense that I don’t get on much with women and he was actually my best friend for years before there was even a whisper of romance. I enjoy making love to him. I love being a mother, and I’m looking forward to giving birth to my seventh child. My marriage is just as complicated, messy, and sometimes-difficult as everyone else’s marriage, but not more so – and in a lot of ways I think that being in an MOM has advantages over both same-sex marriage and more normal heterosexual marriages.

So I don’t feel threatened by the SCOTUS decision, because I don’t see why the liberty of my gay, lesbian and bisexual brothers and sisters would make my happiness any less real. 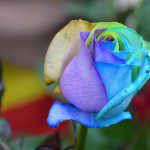 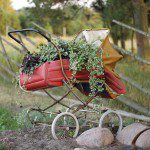 June 27, 2015 5 Ways We Can Save Marriage Now
Recent Comments
0 | Leave a Comment
"I’m shocked by the line about “if she *or* her parents consent”, and honestly wondering ..."
MorganHunter A Painfully Familiar Reason for Using ..."
"I'm not assuming either way, but what if it turned out that they did agree ..."
Makishima Are Women Being Denied the Truth ..."
"The most traditionalist people I've met quote female saints constantly, and reproach Popes, priests and ..."
Ginger An Open Letter to the Young ..."
"I am one of those atheists who don’t care what anyone believes, but care very ..."
BensNewLogin Crossing the Rubicon: Why I Will ..."
Browse Our Archives
get the latest from
Catholic
Sign up for our newsletter
POPULAR AT PATHEOS Catholic
1

The Grace of God in Scrambled...
Steel Magnificat
Books by This Author Books by Melinda Selmys