Is One Of These Virtues Not Like The Others? 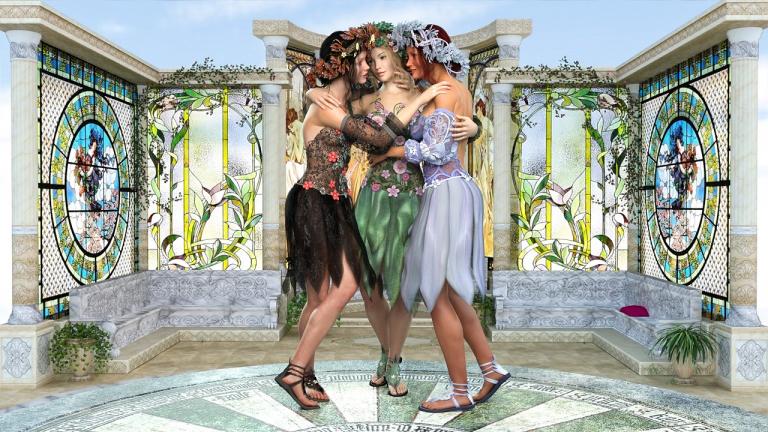 Previously in My Introduction To Geh Sex I talked about my experiences with sex education and my increasing dis-satisfaction with secular narratives about sexuality when I was growing up.

My increasing interest in the question of sexual morality happened to coincide with my girlfriend coming out as polyamorous. In theory, that shouldn’t have been a problem for me. I considered jealousy to be a ridiculous emotion. Both of us had always had boys on the side. I didn’t own her, and I didn’t want to own her. But somehow, it mattered to me, in a way that I couldn’t quite account for.

The realization that something profound was missing from the liberal sexual ethics of my youth happened to coincide with a much more important and dramatic change: the collapse of my atheistic worldview. I’d been an atheist since I had turned thirteen and my mother wanted me to get confirmed in the Anglican church. I refused, on the grounds that I was not going to stand up in front of a bunch of people and publicly lie about my religious beliefs. Over the course of my highschool career I moved from agnosticism towards atheism, occasionally wavering as a result of arguments with my dear friend Kevin, who was a Christian. By the time I was seventeen I had worked out a philosophy that I was reasonably happy with. It was a fusion of Kantian deontological ethics and Sartre’s existentialism, with a dash of Platonism.

And then my philosophy teacher recommended Kierkegaard. He wasn’t trying to convert us to Christianity – he was an atheist. But for some reason, he said that Fear and Trembling was just the thing. So I read Fear and Trembling and slowly everything began to unravel.

I won’t go into the details of the unraveling, but the upshot of it was that I decided I was going to give this whole God idea another chance. And I started praying – not to the Christian God. I was still pretty sure that Christianity was all wrong. But to Whoever was out there. And I asked this being (who I addressed entirely without gendered pronouns), who they were and how I was supposed to worship.

And They said: Catholic.

Now, it took a while for me to accept that this was the answer I was getting. Part of the reason I was excluding the Catholic church from the list of acceptable answers was that it condemned homosexuality. And that was a non-negotiable. But eventually I realized this. I stopped. I thought about what Sartre said about bad faith, and I turned to this God who I was slowly discovering and I said, “Look, alright. If you tell me to join some religion that teaches that homosexual sex is wrong, I will give up homosexual sex.” I was pretty sure that God was a She and that She was just fine with me doing my thing.

Only that’s not how it went. Slowly I become more and more convinced that I was being called to the Catholic church, and that meant I had to keep my end of the bargain. Which I did. The day I converted, I told my girlfriend that we were going to have to break up because I didn’t think that realistically we could continue to be together without having sex.

Now, as it happens my story continues with me falling in love with my male best friend and getting married and having seven children. It’s not a happily ever after story. Believe it or not having seven kids is not a great recipe for a suffering-free life. This is not a story about how if you give things up to God you will get all the candy. But I do want to talk about some of the reasoning behind the decisions that I’ve made.

First off, I want to be clear that I am not especially convinced by natural arguments about sex – at least not as they are traditionally formulated. What I am much more interested in are questions of vocation and of virtue.

I’ll start with virtue. It’s a word that has a bad rap for a lot of people, because for a long time it was used to mean “sexual purity” and nothing else. And “sexual purity” in that context mostly meant unbroken hymens. Which is both absurd and kind of ironic, because originally the word was derived from the Latin “vir,” which means a man, and specifically a Roman citizen. So the virtues were those manly qualities that were required in order to build up a strong, virile civilization. (Yeah, the Romans were a little sexist.)

But there is a tradition of virtue ethics which can be usefully extricated from this morass of rampant misogyny, and that’s what I tend to get excited about.

What do I mean by that? I’ll use an example that almost everyone is familiar with: anger. In our culture, it’s considered perfectly normal and reasonable to expect people to control their anger and to express it in non-destructive ways. I’m gonna point out, for fun, that not all societies have had this expectation. If you go back to the seventeenth century, there was actually a controversy over whether monks were allowed to fight in duels – and the argument was that if they weren’t, this undermined their “right” to satisfaction. Basically, if you felt insulted they actually conceived of it as a right to resolve your emotions using physical violence. You know, provided that you were of the right social class and that you were a man.But today we generally expect people to find constructive outlets for the violent passions, and ideally to cultivate an inner life that isn’t excessively troubled by anger. Most of us see the need to cultivate the virtue of patience, and we see it in a way that is quite different from the way that most people see the virtue of chastity. If I’m trying to learn to be more patient, I take it as a given that sometimes I will not be patient. I’ll get angry. I’ll express my anger by yelling or slamming a door. And then, as soon as my temper has cooled down, what do I do? I go, I apologize to anyone that I got mad at, and I resolve to do better next time. Maybe if this is happening a lot I start looking at triggers that are causing me to get angry and I try to avoid them. Maybe I start practicing meditation or other techniques that will allow me to reduce the physiological stresses that contribute to anger. Whatever. The point is, I don’t say “Oh, I didn’t do this perfectly immediately, so it must be impossible. From now on I will just throw temper tantrums,” and even if I’ve been working at it for over twenty years, and sometimes I still lose my temper, I don’t say “Well, if I haven’t got this figured out by now I never will. Clearly it’s impossible. I should just rage and throw dishes and punch holes in the wall. That would be a much better way to deal with these feelings.”

Now most Christian chastity speakers at this point in the talk would start pointing fingers and talking about how secular society has done blah blah blah. I actually think that most of the reason why people have found chastity to be “impossible” is that purity culture has made an idol of it. Everybody understands that if you are trying to learn patience, it’s going to take a very long time, you’re going to have lots of failures, that growth is gradual and that nobody is really good at it up front. But with chastity, the entire discourse within purity culture has to do with this idea that you are trying to keep something intact. That you have this precious thing, and that every failure is a blow to your dignity as a child of God and His little princess. For women especially purity is focused on protecting something that can be destroyed.

And so naturally when people fail, which they are going to do because practicing virtues is hard, they feel broken, dirty, used, unsalvageable. Something precious has been tarnished forever. And each successive failure only tarnishes it more. And of course that leads to despair. I mean, why are you going to go to all of the effort of trying to do something that is really hard in order to preserve something that, according to chastity speakers, is basically a piece of worn-out Velcro or a rose stripped of its petals?
So that’s a nonsense way of looking at chastity, but it’s also the dominant cultural narrative surrounding what chastity is. And I think it’s absurd for Christians to get angry with secular society for rejecting something that is so completely impracticable.

[These posts are adapted from a talk I gave in Spartanburg last month. If you would like to have me speak at your event you can contact me at melinda@vulgatamagazine.org or view my Catholic Speakers Organization profile here.]

Official Catholic Church Teaching on the...
The Shoeless Banshee: Meanderings Beyond the Pale
Books by This Author Books by Melinda Selmys