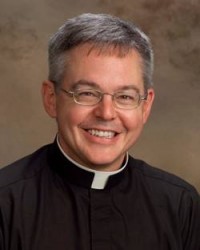 Welcome back to “The Clergy Speaks”, a recurring feature here at The Catholic Book Blogger. “The Clergy Speaks” is a column focusing on one question I have asked various members of the clergy. That question is: What five books would you recommend as must-reads for Catholics today? I left the responses open to current or classic books with the only restriction being that the Bible and the Catechism could not be used as they are a given. This week we welcome Monsignor Stuart Swetland, President of Donnelly College located in Kansas City, KS.

Msgr. Stuart W. Swetland, S.T.D., was ordained a priest in 1991 for the Diocese of Peoria, IL. He received his undergraduate degree in Physics from the United States Naval Academy. Elected a Rhodes Scholar in 1981, he entered the Catholic Church while studying Politics, Philosophy and Economics at Oxford. He has a B.A. and M.A. from Oxford; a M.Div. and M.A. from Mount St. Mary’s Seminary; and his S.T.L. and S.T.D. from the Pontifical Lateran University having studied at the John Paul II Institute for Studies on Marriage and Family in Washington, DC. He has an honorary Doctorate in Humane Letters from Benedictine College in Atchison, KS.

He currently serves as the seventh President of Donnelly College in Kansas City, KS, where he is also Professor of Leadership and Christian Ethics. Previously, he served as Vice President for Catholic Identity and Mission and held the Archbishop Flynn Chair of Christian Ethics at Mount St. Mary’s University in Emmitsburg, MD. He has also served as the Executive Director of the Center for the Advancement of Catholic Higher Education, the Executive Secretary for the Fellowship of Catholic Scholars and Theological Advisor to the Illinois Catholic Conference.

Msgr. Swetland was named a Prelate of Honor in 2000 by Saint John Paul II and is a Knight Commander for the Equestrian Order of the Holy Sepulchure and a 4th Degree Knight of Columbus.

Msgr. Swetland hosts the television show Catholicism on Campus on EWTN and Go Ask Your Father on Relevant Radio.

What is a “Catholic book”? Is it one written by a baptized Catholic? Surely not, for many men and women who have been baptized Catholics have written wicked, anti-Catholic and immoral books. One thinks of two extreme examples, Benito Mussolini and Adolf Hitler. Obviously The Doctrine of Fascism and Mein Kampfare books written by baptized Catholics but entirely devoid of any Catholic world view. In fact, they are anti-Catholic and, thus, anti-Christ. Less obvious or extreme examples of famous fallen away Catholics whose books and writing are somewhat to highly problematic are Voltaire, James Joyce, Maureen Dowd and Bill Maher. A third category would be non-Catholics whose writing about the church and the faith can be breathtakingly beautiful like Mark Twain in Joan of Arc, Willa Cather in Death Comes for the Archbishop and My Ántonia, Robert Bolt in A Man for All Seasons and almost everything by Fyodor Dostoyevsky, C.S. Lewis and Samuel Johnson. Many Catholic writers do not write directly about faith but still their works are permeated with a Catholic ethos (think of the “magic realism” of Gabriel Garcia Marquez, for example).

How do we sort this all out? Well, one really can’t and thus one has to choose the books for a list like this knowing full well the limitations involved.

I will focus my response to books that will aid the average lay Catholic to fulfill his or her vocation to sanctify the world through their work and to be agents of the New Evangelization. Obviously, the Sacred Scripture and the Catechism of the Catholic Church (2nd Edition) are vital so they are already given. The other five I would recommend are:

The next 5 (not paying attention to categories) are:

Many thanks to Msgr. Swetland for taking time out of his busy schedule to share these thoughts with us here at The Catholic Book Blogger.

September 2, 2014 Church Fathers, Day Forty-Three: St. Augustine tells us to rely on God
Recent Comments
0 | Leave a Comment
Browse Our Archives
get the latest from
Catholic
Sign up for our newsletter
POPULAR AT PATHEOS Catholic
1

Fetal Cell Lines Are Not Continual...
Through Catholic Lenses
Related posts from The Catholic Book Blogger

Love in a Time of Bug-Like Behaviors: Short...
In order of when I saw these things, meaning that the best...
view all Catholic blogs
What Are Your Thoughts?leave a comment
Copyright 2008-2020, Patheos. All rights reserved.