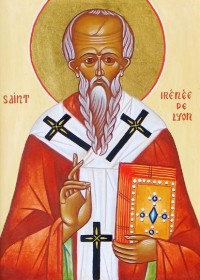 Know that you are God’s image

God made human beings in the image of God. St. Irenaeus reminds us that we are a special creation. The story in Genesis tells how God spoke all other things into being, but formed human beings with his own hands.

God by His Word has created the whole world, and to all the world he has given laws in which each different thing should exist, and according to what is determined by God should not pass their bounds, each fulfilling its appointed task.

But man he formed with his own hands, taking from the earth that which was purest and finest, and mingling in measure his own power with the earth. For he traced his own form on the formation, so that what would be seen would be of divine form. Man was formed as the image of God and set on the earth.

And so that he might become living, God breathed on his face the breath of life; that both in the breath and in the formation man should be like unto. More­over, he was free and self-controlled, being made by God for this purpose, that he might rule all those things that were on the earth. And this great created world, prepared by God before the formation of man, was given to man as his place, containing all things within itself.

Am I using the freedom God gave me the way God wants it to be used?

Lord, let all my thoughts be holy, and let sinful deeds be far from my mind.