“War for the Planet of the Apes” review: Hail, Caesar 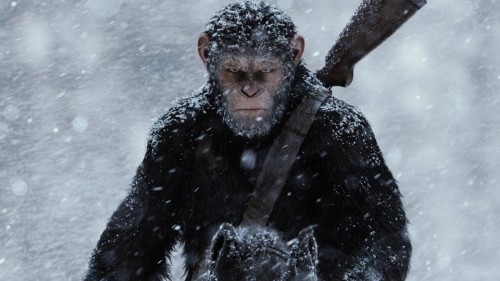 “War for the Planet of the Apes” is the type of movie I thought Hollywood had forgotten how to make.

The third entry in the rebooted franchise is challenging, provocative and riveting entertainment. Boasting the best special effects and motion-capture work I’ve seen and an epic scope with strong biblical undertones, it’s a story of complex characters navigating muddy moral waters and the apocalyptic ramifications of violence. It’s troubling, astounding and difficult ⸺ and one of the best movies of the year.

In this age of disposable popcorn fare, unending cinematic universes and grimness masquerading as maturity, the most recent trilogy of movies in the “Planet of the Apes” franchise has always aspired to something more. The 2011 prequel/reboot “Rise of the Planet of the Apes” was a smart, thought-provoking kickstart to the dystopian tale. Its sequel, “Dawn of the Planet of the Apes” was even better, a full-on action thriller where humans were largely pushed to the side in favor of focusing on Caesar (Andy Serkis) and his fellow simian soldiers. It was a chilling, urgent and full-throated bit of serious science fiction, in line with the often dark ethos of the original franchise.

“War for the Planet of the Apes” takes place several years after the events of “Dawn,” which climaxed with a battle between humans and apes. It ended with Caesar making the devastating decision to break his “ape shall not kill ape” law when confronting the traitorous Koba. That decision haunts Caesar, who wakes up with nightmares in the refuge he and his tribe have found for themselves. Humans are scattered, largely done in by the Simian Flu that began spreading at the end of “Rise.” A remnant of soldiers, led by a crazed colonel (Woody Harrelson) is searching the woods for Caesar, aided by apes who have agreed to serve as their slaves in exchange for remaining alive.

One evening, as Caesar is away from his family and debating whether to take his tribe to a new home, the colonel arrives and does the unthinkable. Brokenhearted and hellbent on revenge, Caesar sends the rest of the apes to find a new home and sets out to kill the colonel. But if you’re looking for a simplistic revenge story or a moralistic screed about the price of violence, look elsewhere. “War” has deeper things on its mind. 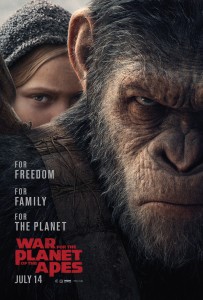 I am not anti-blockbuster. I think the Marvel Cinematic Universe is one of the most purely fun series in recent decades. I like lightweight, breezy escapism. But by embracing its predecessors’ commitment to serious, thinking-person’s science fiction and telling a tale of destruction and morality on a giant canvas, the new “Planet of the Apes” series has become the smartest and best bit of franchise filmmaking around. With “Dawn,” director Matt Reeves (“Cloverfield,” “Let Me In”) doubled down on what Rupert Wyatt had promised in “Rise,” making an intelligent and emotional epic with the apes at the center. The films, of course, are explorations of humanity, using the story to explore the ramifications of playing God, our desire for peace and propensity for violence, the power of mercy, and the innate flaws that could destroy our civilization. You don’t have to look to hard to see parallels between the sadistic, wall-building colonel and our current commander in chief.

But that’s not because Reeves is making a film that uses science fiction as an allegory for modern-day politics; this movie was in the works long before Donald Trump’s presidency was a thought. The film is relevant not because it’s of the moment but because, like the best science fiction, it explores the foibles and flaws that have been innate in humans for millennia. In fact, Caesar’s journey in this film has less parallels with American wars and more with the Exodus journey; he’s Moses leading the apes to the promised land. The question is whether or not he will be worthy of joining them.

The motion-capture work is astonishing. I intellectually know that Caesar, Rocket, Maurice and the other apes are CGI creations, but my brain can’t accept it. Reeves shoots most scenes in close-up, detailing every tuft of fur, battle scar and pockmark. Serkis and the others aren’t simply providing reference points; they’re acting. Caesar is one of the most complex cinematic heroes we have. He’s a noble hero, protecting his family and tribe. He wrestles with his love for humans because of his experiences in “Rise,” but he’s also troubled by the inevitability of conflict and haunted by the death of Koba at his hands. He seethes with rage but is also calculated and patient, wrestling with mercy and vengeance. Serkis gets this across through his furrowed eyebrows and clenched jaw, and Caesar’s measured speech patterns. Talk about rewarding Serkis’ acting with an honorary Oscar began with his work in “The Lord of the Rings.” That discussion needs to be had again, but it shouldn’t be an honorary Oscar; Andy Serkis is simply giving one of the most nuanced and powerful performances in modern cinema.

Reeves brings back many of Caesar’s compatriots from the previous film, including Maurice and Rocket, who have been with him since “Rise.” There’s a moving trust and companionship between the three, and it’s remarkable how much emotion has been built into this trilogy. A simple phrase like “Apes together strong” had power in the first film but, through these three, it’s become a stirring and resonant rallying cry. The apes have personality and complexity; we empathize with them and want to see them find a peaceful future. This is the rare sci-fi trilogy where we spend most of the film hoping action won’t happen; when violence does occur, it’s something to be mourned and it carries consequence. Reeves imbues the story with great weight and power, looking at action not as something cool but something tragic and often horrific. It’s apparent throughout the films that the humans in this world will eventually destroy themselves. The bigger question is whether Caesar and the apes follow?

The world widens up in this third movie, including new heroes and villains. A mute girl tests Caesar’s resolve for vengeance and also holds a grim clue to humanity’s future. Harrelson has a jumping between roles that allow him to be likeable lugs or intimidating badasses. Here, he’s in the latter category. His colonel is a violent man bent on wiping out the apes; he’s quite mad and we learn later on that he’s even seen as a threat by other humans. He’s followed by crazed men who want nothing less than an ape genocide and possibly believe they are supposed to usher in the end of the world. But there’s a backstory to the colonel that humanizes him and gives him tragic weight, and a horrifying mutation of the Simian flu the makes things look even more dire for humans. Harrelson is terrifying and smart, spouting military strategy and zealous beliefs. This new “Apes” trilogy has steadily gotten better with its human foils and the colonel presents the greatest obstacle for Caesar to overcome yet.

But make no mistake, this is the apes’ story. And Reeves finds new dimension to their world, from the way they create their society in the caves to the different loyalties they hold. This society of enhanced simians fractures like humans do, with some believing humans must be decimated and others believing peace must be pursued. Some are just trying to survive, partnering with humans who call them “Donkey” (like Donkey Kong) and killing fellow apes because it’s their only guarantee of staying alive.

Perhaps the most memorable character is Bad Ape, played by Steve Zahn. A zoo-bound ape who was afflicted with the same Simian Flu that transformed Caesar and the others, he’s lived in hiding, taking on a moniker that his human captors bestowed upon him. Dressed in a winter coat and bearing a lack of smarts, he’s initially comic relief. But there’s something deeply endearing about Bad Ape, and Zahn takes a character that could have been an annoying addition to a traditionally serious-minded franchise and makes him one of the highlights. Bad Ape is funny, yes, but he’s also so sincere and so buried under the weight of his own self-doubt that he becomes the film’s highlight.

Reeves is a fascinating director. For all the moaning about found footage, “Cloverfield” was an inventive, stylish monster movie that also tackled post-9/11 fears.  “Let Me In” was a creepy and atmospheric remake of one of the greatest horror films ever made. But with the “Apes” films, Reeves has brought freshness and immediacy back to blockbusters. This is a story filled with depth, heart, horror and sadness, and Reeves isn’t afraid to challenge and provoke his audience, successfully making them root against their own species. And while it’s a weighty movie, it’s also highly entertaining. By turns, it’s funny, exciting and tender. It goes from war epic to Exodus tale to science fiction reimagining of “The Great Escape” without missing a beat. It’s both an inventive and fun special effects picture and a somber look at the way a life of violence wears on a man (or ape) that would make a fascinating double feature with this year’s “Logan.” There simply isn’t another franchise film like it.

And in an age where every blockbuster is building a bigger story, “War for the Planet of the Apes” has the conviction to bring this particular trilogy to a conclusion. Its final sequence is stirring and emotional, and works both as the finale of Caesar’s story and the opening of a new saga (one that we’ve possibly already seen). From “Rise” through “Dawn” and now with “War for the Planet of the Apes,” this world has changed and it’s amazing to look back and see just how much has happened in three films. This is confident, skilled filmmaking. And while I’m sure we’ll see more “Apes” films down the line, the takeaway I most hope for is that directors will more boldly step up to deliver spectacle fueled by intelligence and emotion. 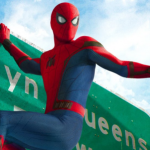