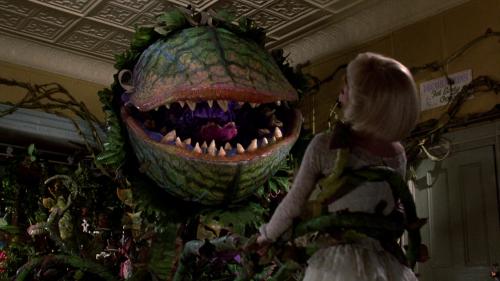 “Little Shop of Horrors” might be the most adorable movie ever made about murder.

Frank Oz’s adaptation of Alan Menken and Howard Ashman’s musical — itself a loose adaptation of an old Roger Corman film — is beloved for its toe-tapping numbers, awkward romance between geeky lovers, and a scene-stealing plant that belts out Motown. It’s helmed by Frank Oz, the voice of Fozzie Bear, Miss Piggy and Yoda. It spawned its own animated children’s series. Thirty years after its release, it’s easy to remember this as nothing more than a light-hearted comedy and look past its critique of consumer culture and the characters’ Faustian bargains. It’s sweet but deranged, and it’s one of my favorite cinematic musicals.

The film takes place in a squalid center of the city known as Skid Row. At a struggling flower shop, geeky Seymour Krelborn (Rick Moranis) toils away while pining over the beautiful Audrey (Ellen Greene), who’s dating an abusive dentist while dreaming of a tidy home in the suburbs. When Seymour trips across a bizarre Venus fly trap during a solar eclipse and puts it on display in the florist’s window, business soars. When the plant reveals a taste for blood, Seymour is willing to prick his fingers and feed the seedling. But as the plant — named Audrey II — gets bigger and begins to talk (and sing!), its hunger grows and a few small cuts won’t be enough to satiate it. Seymour, spurred on by promises of fame, fortune and romance, turns to devious means to keep his plant full, but how long before he’s found out? And Audrey II might have even bigger ambitions once it’s done with Seymour.

It sounds gruesome, but Oz, in his first directorial effort since “The Muppets Take Manhattan,” turns it into something sweet, funny and immensely entertaining. The stage-setting “Skid Row” might be one of the most flat-out enjoyable numbers in any modern Hollywood musical, and Levi Stubbs’ turn as Audrey II is a bullying, monstrous riot. The Greek chorus of Motown singers keeps things humming along, and the movie is paced with the energy of a stage comedy. Oz calls in favors from his Hollywood friends, so Christopher Guest shows up briefly as a floral shop customer and John Candy mugs for a bit as a hyperactive radio DJ. Steve Martin, as Audrey’s dentist boyfriend, puts in an extended cameo — complete with show-stopping, Elvis-inspired musical number — that threatens to steal the entire movie,  until Bill Murray waltzes in as a dental patient with a pain fetish and swipes it right from him.

Menken and Ashman’s music is infectious and fun, spanning the gamut of old-school rock, traditional show tunes and R&B, spiked with clever and sometimes cutting lyrics. Audrey’s ballad, “Somewhere That’s Green” might come across as a sweetly realized ode to domesticity, but it’s actually a pretty wicked send-up of American consumer culture, where she admits to dating “a semi-sadist” and dreams of  a “washer and a dryer, and an ironing machine” in her home’s “Pine Sol-scented air.” The fan-favorite “Feed Me” ends with Seymour belting out (about Audrey’s boyfriend) “you need blood and he’s got more than enough,” and wondering if he can perform “mutilations.” Even the peppy title number implores us to “feel the Sturm und Drang in the air.” The off-Broadway version, complete with a subplot about the floral shop owner adopting Seymour to cash in on the craze and a moment where Seymour sings about the moral quandaries of murdering the dentist (both cut from the film), is a pitch-black, darkly humorous puppet show. On stage, where audiences can see the artificiality, that cynicism goes down a bit easier. It could easily curdle in a movie theater, where you invest more emotionally in the characters, who are seen not at a distance but in vivid closeups. By goosing the humor, pulling back on the snark and softening the satire, Oz keeps the movie enjoyable, even turning a sequence where Seymour feeds hacked-up body parts to a giant plant into something that’s ghoulish but not ghastly. 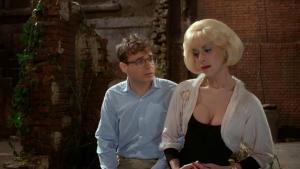 Key to the film’s success is the central romance between Seymour and Audrey. Greene, who played the role on stage, is wonderful. She’s all breathy ditziness when she speaks, but brings a great deal of sympathy and character to Audrey. She’s resigned to life on Skid Row and doesn’t believe she deserves someone nice like Seymour; her relationship with Martin’s dentist is stark in its depiction of abuse, and Greene captures Audrey’s yearning for something better that she feels she doesn’t deserve. The lyrics to “Somewhere That’s Green” might be snarky, but Greene packs so much emotion into Audrey’s desire for a home “out of ‘Better Homes and Gardens’ magazine” turns it into something tender. Moranis, an actor dearly missed on the screen, is at his best here. Seymour’s a nerd and a slob, and could probably be cousin to Moranis’ “Ghostbusters” character. But there’s something charming to his enthusiasm and meekness, and we understand why Seymour might be willing to go to nefarious lengths when his big shot arrives. But Moranis doesn’t paint the character as a victim; in “Feed Me,” he lets Seymour’s darker ambitions shine through, and in “Suppertime” he pushes the character a bit further into darkness, choosing to let something awful happen to keep his secret safe. And the actor is also a compelling romantic lead, his niceness not a joke but the very thing Audrey has been secretly pining for. Moranis and Greene’s duet “Suddenly Seymour” is a fantastic love ballad, and the movie’s high point — which is saying something in a movie that features a giant, bloodthirsty plant.

Does this deserve a happy ending?

But the film’s drawback is that it can’t quite stick the landing — and it’s had two shots.

The play’s ending is famously a downer, with Seymour feeding an injured Audrey to the plant and then being consumed before the plant takes over the world. Oz originally filmed this ending, complete with massive special effects featuring giant plants wreaking havoc across the globe. Test audiences, who had been loving the movie up to that point, revolted. And it’s not surprising why; even Oz said that audiences were okay with the bleak ending on the stage, where the actors could come out and take a bow afterward. But in a movie, where closeups build greater empathy and there’s no curtain call, it takes the air out of the room. And so the 20-minute finale was scrapped in favor of a more traditional one where Seymour destroys the plant and runs off with Audrey.

Even as a kid, I could tell there was something off about this ending. It feels rushed. True, there’s a catchy song in “Mean Green Mother from Outer Space” (which was part of the original ending and new for the film), but Seymour’s final tussle with Audrey II is largely weightless, culminating in an explosion, a kiss and a quick footnote of an ending. It’s not bad, per se, but feels tacked on (which, of course, it was). More than that, it takes the tweaks at capitalism, greed and consumer culture and does nothing with them. Seymour isn’t punished for letting people die (and feeding them to plants), and he and Audrey run off the happy home with plastic-covered furniture and nicely manicured lawns that “Somewhere That’s Green” needled. It’s a happy ending, but one that isn’t exactly earned, although our affection for Seymour and Audrey keeps it from being a disaster. 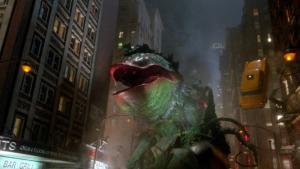 A few years back, the film was released on Blu-Ray with Oz’s original ending (it had previously only been seen in a black-and-white cut as a DVD extra that was quickly pulled from shelves). It’s definitely a better conclusion. “Don’t Feed the Plants” is the fun, acidic finale the movie deserves, and the deaths of Audrey and Seymour are genuinely affecting. The film takes the play’s consumerism critique worldwide, indicting an entire society of Seymours who run out to buy miniature Audrey II’s that grow to massive sizes and destroy humanity. The extended finale is one of the most astonishing practical effects sequences I’ve seen, with giant plants rampaging through the city, busting down walls, devouring trains and climbing the Statue of Liberty. It makes you feel for the artists who put this sequence together only to have their work discarded for 25 years in favor of a cheap explosion. It feels more a piece with the rest film, and it makes the satire sting a bit more.

Yet it doesn’t quite work. The special effects, while astonishing, go on and on (although it’s likely we’re not seeing what a full edit would have been). But more than that, Oz is right — the empathy we build for Audrey and Seymour gives the ending a bitter taste. Onstage, with all of the production numbers intact, “Little Shop” is a bit more wicked with its satire and the ending is just the right wicked culmination. But Oz’s film is too darn nice, Moranis and Greene too lovable, and the film too fun for its dark finale to feel right. The movie (wisely) pulls back on its more satiric and cynical elements throughout, but the ending is as bleak as it gets. It’s a jarring tonal shift, turning the movie preachy when before its satire was a diluted. With some time, maybe Oz could have massaged the film so it fit better, but as integrated, this ending is a fascinating, if flawed, inclusion.

But it’s still worth a look. “Little Shop of Horrors” has some all-timers in terms of songs, and there are few musical romances as tender and sweet as the one between Audrey and Seymour. Comedy fans owe it to themselves to watch Martin and Murray walk away with the show, and aficionados of Oz’s work with Henson will likely love watching him make what might be the most deranged Muppet movie ever made. There’s also an argument to be made that Frank Oz is simply one of our most underrated comedy directors, and his work probably deserves more critical re-examination. So, definitely add “Little Shop of Horrors” to your Halloween rotation. It’s adorable and grotesque, and the best movie ever made about singing, bloodthirsty plants.

Note: Fathom Events will be hosting special screenings of “Little Shop of Horrors: The Director’s Cut” on Oct. 29 and Oct. 31, the first time this film will be seen theatrically with the restored ending. For more information, check here. 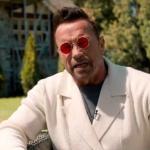