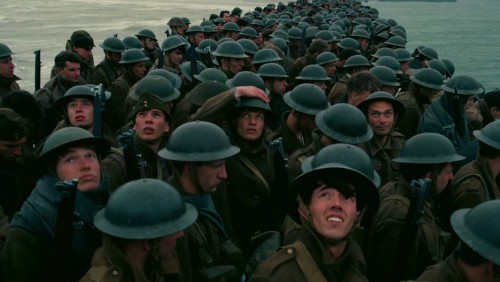 “Dunkirk” is a visceral experience unlike any war movie I’ve seen. It’s the type of movie that an opportunistic marketer could have a field day with, imploring you to FEEL the claustrophobia, HEAR the gunfire and SMELL the diesel.

That it’s more than just an intense simulation is a testament to director Christopher Nolan, who plays to his strengths and avoids his worst tendencies. A craftsman who’s enamored with meticulousness, Nolan creates an innovative and precise look at one of World War II’s most storied battles. It’s quite possibly the auteur’s best film.

“Dunkirk” is, of course, about the evacuation of nearly 300,000 British soldiers from the shores of France during the early days of World War II.  In what has come to be known as a miraculous endeavor, the evacuation required not only the service of armed forces on the beach, sea and air, but also assistance from civilian sailors. The operation, which was seen as a moment of hope amidst military failure, is considered a crucial turning point in strengthening British morale and changing the course of the war.

There’s a sweeping, epic story to be made from this and, indeed, the battle of Dunkirk has been told on film repeatedly, most notably in 1958’s “Dunkirk” and in a standout sequence in Joe Wright’s “Atonement.” In this new telling, Nolan marries the epic and the intimate, providing a look at the immense scope and multiple players required to successfully pull off the operation by focusing on the human stories that came together at just the right moments.

Nolan tells the story of Dunkirk on three different stages, each taking place over a different time frame. On the beach, he focuses on British soldiers (played, among others, by Fionn Whitehead and boy band star Harry Styles) and a commander (Kenneth Branagh) as they duck from bombers and try to survive over the course of a hellish week. On the sea, he tells of a civilian sailor (Mark Rylance) and his sons, who sail into danger during one day to help their countrymen. In the air, he looks at the longest hour in the life of a bomber pilot (Tom Hardy). Nolan cuts back and forth in chronology, showing us events from different perspectives and giving us new insight into characters as the events shape them.

It’s an approach that could have been confusing or ham-fisted, but other than maybe Richard Linklater, few directors have been as fascinated by film’s ability to let them play with time. Nolan first did this, of course, with “Memento’s” slippery chronology, but his work in “Inception,” which dealt with a dreamscape where time worked differently at different layers, and “Interstellar,” where time moved faster on an alien world than it did on Earth, allowed him to further experiment. With “Dunkirk,” his stretching of time gives a taste of the intensity of war, where an hour in the sky can feel like seven days. By showing us the same events from different angles, with characters in the right place at just the right moment, he gives us a sense of how this miracle came to be, requiring the hard work and sacrifice of many, working as part of one big military machine. 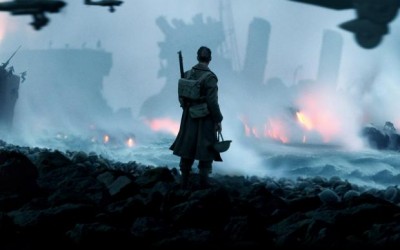 Nolan doesn’t use “Dunkirk’s” unique narrative device to make a clinical intellectual exercise, but to ratchet up the tension. The film starts in high gear, with a taut foot chase through the Dunkirk city streets and to the beach, and it never lets up. Nolan’s working at the height of his powers here, and the result is a nerve-wracking, unrelenting experience. We’re never shown a German soldier, the word “Nazi” is never mentioned and the PG-13 film is mostly bloodless, but the onslaught never stops. Nolan puts us in the cockpits of planes hundreds of feet above the ocean ⸺ and sometimes sinking into it. We’re in the bowels of sinking ships, on the beach ducking from dive bombers. The film has a staggering scope, but also has moments that will make claustrophobic audience members look for the exits. The sound design is amazing; bullets ricochet and zing, and Han Zimmer’s score drones and rumbles, increasing the tension to nearly unbearable levels.

There’s never been a question to whether Nolan can skillfully direct action or tell a good story. His more recent problem, however, has been his tendency to overload movies with mopey, guilt-ridden protagonists and bog the story down with dialogue-heavy exposition. “Dunkirk” feels almost like a challenge the filmmaker set for himself. Only a hair over 100 minutes, half the characters aren’t even named and only a fraction of them have dialogue. Hardy, his face hidden behind an aviator’s mask, has maybe a dozen lines. Either Branagh or Rylance might have the most to say, but even their dialogue is often just terse orders or reactions. Much of “Dunkirk” works like a silent film; objectives and battles aren’t explained, but experienced in the moment, and the film never stops moving. But Nolan’s an astute storyteller; what’s happening is always clear, never confusing.

The approach means that few of the actors have a big moment to shine; some even tend to blend into the background (indeed, not being a One Direction fan, I assumed Styles was playing someone completely different until I checked IMDB for this review). This isn’t a movie about one character’s epic journey or heroic exploits but the small moments of quiet determination and courage that led to the successful evacuation of Dunkirk. Although Whitehead’s character gets the most screen time in the story taking place on the beach, he never becomes a fully realized character, nor does Hardy’s bomber pilot or Branagh’s admiral. Rather, as often happens in a Nolan film, they’re defined by their actions, whether their attempts to stay alive, their stalwart steadiness in the face of certain defeat or their unrelenting dedication to keep the skies safe for others.

Some may find it hard to connect with the characters, and that’s understandable. Nolan’s films have always been aloof and even his most overtly emotional — the space epic “Interstellar” — was still largely padded with technical talk and intellectual ponderings. But I don’t think that Nolan is holding the audience at arm’s length. He’s not avoiding emotion so much as refusing to turn the film into yet another manipulative epic. The film’s intimate focus is quietly touching, drawing emotion from an off-handed remark about the death of one character, a nod of the head from Rylance, or the haunted stare of Cillian Murphy as a shell-shocked survivor. Just as the various stories add up to a more epic whole, so each of these moments adds up to a film of surprising emotional power, one that resonated with me long after the film had ended.

I’ll admit that when I first heard Nolan was doing a WWII movie, my interest wasn’t that high. War movies are often good, but I didn’t know whether there was much more to say about these oft-told tales. I wanted one of our most fascinating storytellers to do something innovative again. I’m happy to both be proven wrong and to get what I wanted. “Dunkirk” is a great film, and possibly the best work of Nolan’s career. 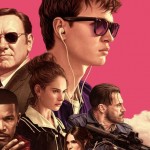 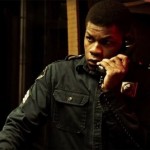 July 27, 2017 Review: "Detroit" is Brutal, Messy and Essential
Recent Comments
0 | Leave a Comment
Browse Our Archives
get the latest from
Entertainment
Sign up for our newsletter
POPULAR AT PATHEOS Entertainment
1