It is hard to pick only 10 of Jesus’ quotes because everything He said was powerful.  Here are 10 quotes from the gospels from Jesus Christ that I believe have eternal implications.

John 8:7 “And as they continued to ask him, he stood up and said to them, ‘Let him who is without sin among you be the first to throw a stone at her.’”

Too often we cast stones at other believers when we are not without sin.  I have frequently said that if I have a stone to cast, it would have to be at my own self.  Jesus did not say that the woman caught in adultery was without sin but those who are without sin can cast the first stone.  Everyone left of course and Jesus said, “Now, go and sin no more” (John 8:11).  This verse is often taken out of context but Jesus was clear that this woman had sinned and commanded her to not sin any more.  Incidentally, why wasn’t the man brought along with this woman for he was also caught in the act of adultery.  What a double standard by these religious hypocrites.

John 13:1 “Now before the Feast of Passover, when Jesus knew that his hour had come to depart out of this world to the Father, having loved his own who were in the world, he loved them to the end.”

Matthew 6:34 “Therefore do not be anxious about tomorrow, for tomorrow will be anxious for itself.  Sufficient for the day is its own trouble.”

I love this.  If we are worried about tomorrow, we are borrowing trouble from tomorrow and paying interest on it ahead of time.  I heard a pastor once say that only about 17% of what believers worry about actually comes true.  What a waste of energy worrying is. What is the “therefore” there for?  It is because Jesus had been talking about our natural tendencies to worry about where our food, clothing and shelter would come from (Matt 6:25-28).  Jesus was rebuking them because they (and all of us) often worry about things in the future that never come to pass.

John 11:25-26 “Jesus said to hear, ‘I am the resurrection and the life. Whoever believes in me, though he die, yet shall he live, and everyone who lives and believes in me shall never die. Do you believe this?’”

Jesus has conquered the grave. He declared victory over death.  He brings life to those who will die.  Even if we die, and 1 out of every 1 people does, we will live again if we have trusted in Christ.  This means “whoever.”  Jesus is not just talking to those who were listening or only to Martha whose brother Lazarus had died but to “whoever believes in me, though he die, yet shall live again.”  This is not only good news…it is the best possible news.

Mark 2:17 “And when Jesus heard it, he said to them, ‘Those who are well have no need of a physician, but those who are sick. I came not to call the righteous, but sinners.”

Jesus is a friend of sinners but He is opposed to the religious hypocrites (James 4:6).  Jesus said that he came to call the sinners and was rebuking the Pharisees because they said that Jesus was eating and drinking (associating) with them.  Jesus clearly said that it is the sick (sinners) who are in need of healing (Isaiah 53).  Those who think that they are already perfect (i.e. the Pharisees) don’t believe that they need forgiveness.  How wrong they were. 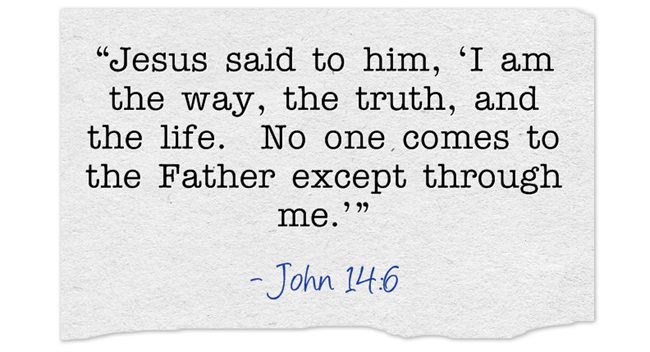 By saying this, Jesus declared all other religions invalid.  There is no other way to heaven by which men and women can be saved than through Jesus Christ, period (Acts 4:12)!  Jesus thus destroyed “universalism.”  Universalism is a belief that ultimately everyone will be saved or go to heaven.  Sadly, many Christians hold to this belief but they are badly deceived.  Jesus did not say that I am “a” way or “a” truth, or “a” life but He is the one and only way…THE way, not A way.  He is the one and only truth. He is the one and only way to eternal life.  Many people believe that there are many paths to God. Let me say that there are only two paths to God. One is through Jesus Christ and eternal life (John 3:16) and the other path is to eternal condemnation (John 3:18, Rev 20:11-15).  I strongly suggest the path that is through Jesus for no one will go to heaven where the Father is unless they go through the Lord Jesus Christ (Acts 4:12, 16:30-31).

Read this related article with 15 Words of Jesus from the Bible on What Christians Want To Know.

John 3:16-18 “For God so loved the world, that he gave his only Son, that whoever believes in him should not perish but have eternal life. For God did not send the Son into the world to condemn the world, but in order that they world might be saved though him. Whoever believes in him is not condemned but whoever does not believe is condemned already, because he has not believed in the name of the only Son of God.”

This may be the most famous quote known, by believers and non-believers.  The love of God is no more vividly displayed to the saved and to the lost than on the cross by Jesus willingly giving His own life. This love is also displayed by the Father for it is the Father Himself that gives His Son Who died for the ungodly.  Believe in Him and you will not ever have an eternal death (John 3:16).  If you choose to not believe, you stand condemned already (John 3:18). This “whoever” shows that God has a passionate desire that no one should perish (2 Peter 3:9) and everyone has freewill to believe in Him. We can choose life or death (Duet 30:19). It is entirely up to us.

This was a new commandment given by Christ.  We are to love one another.  In what way?  In the same way that Jesus loved us.  How did Jesus love us?  He willingly served us, He willingly died for us.  That is a hard love to live out.  It is a powerful witness tool for the lost because He said “”By this all people will know that you are my disciples, if you have love for one another.” When Christians attack other Christians over non-essentials like tongues, we damage the gospel message to unbelievers. I have heard non-believers say that “If that is Christianity, I want no part of it.”  Who could blame them?  Jesus said “By this all people will know” and this “all people” most certainly means unbelievers.

Matthew 5:11 “Blessed are you when others revile you and persecute you and utter all kinds of evil against you falsely on my account.”

The word “blessed” literally means “to be made happy.”  So we can see that Jesus is saying “you will be made happy or joyful” when you are reviled, persecuted, and lies spoken about you because we name the name of Jesus.  This blessing is spoken of by Peter when he wrote that we should “not be surprised at the fiery trial when it comes upon you to test you, as though something strange were happening to you.  But rejoice insofar as you share Christ’s sufferings, that you may also rejoice and be glad when his glory is revealed. If you are insulted for the name of Christ, you are blessed, because the Spirit of glory and of God rests upon you.”  Wow.  Did you catch that?  You receive the “Spirit of glory” which means we can glorify Christ in our sufferings and persecutions.  Peter said it shouldn’t surprise us.  The real surprise would be if we are never persecuted for Christ’s name sake.  If we are never persecuted for His sake, maybe we ought to see if we are a Christian or not. Many deny Christ by their silence and this should get the attention of those who think they are saved but really aren’t because someday Christ will deny them (Matt 10:33, 7:21-23).

Matthew 5:6 “Blessed are those who hunger and thirst for righteousness, for they shall be satisfied.”

This is another of the Beatitudes or some call The Sermon on the Mount.  Those who have a hunger for God’s righteousness will be satisfied someday.  That means that they will have the satisfaction of a hungry man eating a full meal.  They will be blessed because whoever has this thirst for righteousness can drink from the Living Water (John 7:37-39) and will never be thirsty again (John 4:13-14).  David described it in Psalms; “As a deer pants for flowing streams, so pants my soul for you, O God”  (Psalm 42:1).  I remember when I was very young and was on my first hunting trip we were hunting for deer and we saw a deer whose chest was heaving from exhaustion because hunters were trying to kill him.  This deer was drinking deeply from a creek bed. It appeared that he was dying of thirst. I believe this is the image David spoke of when he said that his soul panted after God.  For those who are desperately hungry and thirsty for the Word of God…indeed for God Himself, some great day they will be satisfied.

If you have read these quotes, maybe you can see how deeply satisfying God is.  For those who choose to believe in Christ, they await their eternal home of glory.  Jesus wants us to come to Him for eternal life and doesn’t want anyone to be lost. If you have no guarantee of eternal life right now, put your trust in the Lord and He will save you.  Today is your day of salvation (2 Cor 6:2) or it is your day of condemnation (John 3:18).  It is your choice.