What Does The Bible Say About Predicting The Future?

What Does The Bible Say About Predicting The Future? April 12, 2014 Jack Wellman

Does the Bible condemn predicting the future?  Since God predicts the future why can we?  Why is this a detestable thing to God?

Bible prophecies are a prediction of the future but the difference is that they have already come to pass or those yet in the future will certainly occur.  You could say that prophecies are events that are poured into the mold of history that cannot be broken.  God has power to bring about what He prophecies.  Isaiah speaks the words of God as He says, “I am God, and there is no other; I am God, and there is none like me, declaring the end from the beginning and from ancient times things not yet done, saying, ‘My counsel shall stand, and I will accomplish all my purpose” (Isaiah 46:9b-10). Who can change what God has declared to come about?  Who can stop what God says will come?  What man or woman can predict with 100% certainty what is to occur in the future?  The answer is obvious…no one can stop what God has power to bring about what He prophecies.  Meteorologists can predict the weather but they cannot bring about anything to make their forecasts come to pass.  At best they can only make educated guesses and then hope that they come true but what God speaks necessarily happens.

Listen to these strong warnings from God about those who seek to predict the future:

Deuteronomy 18:10b-12a “anyone who practices divination or tells fortunes or interprets omens, or a sorcerer or a charmer or a medium or a necromancer or one who inquires of the dead, 12 for whoever does these things is an abomination to the Lord.”

Jeremiah 27:9-10 “So do not listen to your prophets, your diviners, your dreamers, your fortune-tellers, or your sorcerers, who are saying to you, ‘You shall not serve the king of Babylon.’ 10 For it is a lie that they are prophesying to you, with the result that you will be removed far from your land, and I will drive you out, and you will perish.”

Jeremiah 14:14-16 “The prophets are prophesying lies in my name. I did not send them, nor did I command them or speak to them. They are prophesying to you a lying vision, worthless divination, and the deceit of their own minds.  Therefore thus says the Lord concerning the prophets who prophesy in my name although I did not send them, and who say, ‘Sword and famine shall not come upon this land’: By sword and famine those prophets shall be consumed.  And the people to whom they prophesy shall be cast out in the streets of Jerusalem, victims of famine and sword, with none to bury them—them, their wives, their sons, and their daughters. For I will pour out their evil upon them.”

Many claim to be prophets today but there is zero tolerance in the Bible for prophets who are not from God because if they are wrong even once, they are false prophets.  Deuteronomy 18:20-22 says that a

“prophet who presumes to speak a word in my name that I have not commanded him to speak, or who speaks in the name of other gods, that same prophet shall die.’ And if you say in your heart, ‘How may we know the word that the Lord has not spoken?’— when a prophet speaks in the name of the Lord, if the word does not come to pass or come true, that is a word that the Lord has not spoken; the prophet has spoken it presumptuously. You need not be afraid of him.”

He or she may not immediately die but they will be judged by God in time and it will not go well with them.

Prophecies are not human in origin as Peter states “no prophecy was ever produced by the will of man, but men spoke from God as they were carried along by the Holy Spirit” (2 Pet 1:21). Jesus warned about false prophets “who come to you in sheep’s clothing but inwardly are ravenous wolves” (Matt 7:15).  God will judge “Both prophet and priest [who] are ungodly; even in my house I have found their evil, declares the Lord” (Jer 23:11) “Therefore thus says the Lord of hosts concerning the prophets: “Behold, I will feed them with bitter food and give them poisoned water to drink, for from the prophets of Jerusalem ungodliness has gone out into all the land” (Jer 23:15).  Even in the Apostle John’s day “many false prophets have gone out into the world” (1 John 4:1) and they are still going out in the world today.  Jesus predicted that not a few but “many false prophets will arise and lead many astray” (Matt 24:11) but also “false christs and false prophets will arise and perform great signs and wonders, so as to lead astray, if possible, even the elect.  See, I have told you beforehand” (Matt 24:24-25). 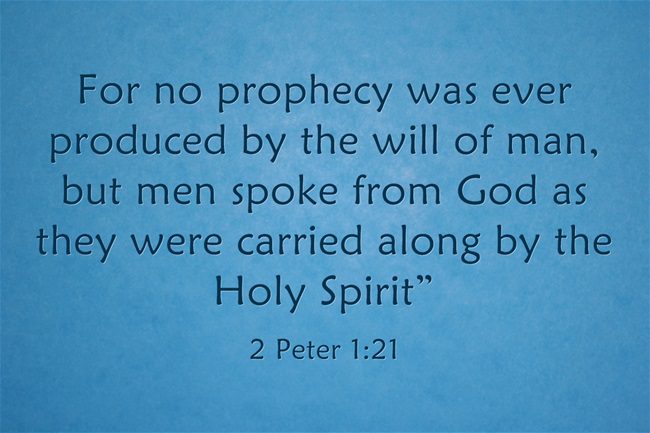 God condemns many of the so-called practices that predict the future and these include horoscopes, astrology, tarot cards, Ouija boards, witchcraft, sorcery, seeking unfamiliar spirits or the spirit world, trying to communicate with the dead, palm reading and anything or person that tries to predict the future.  Predicting the future is trying to enter into the territorial rights and privileges of God Who alone has this right reserved unto Himself.  If you are practicing any of these you can know for certain that God will not leave unpunished anyone who does such things Rev 22:15; Isaiah 8:19; Lev 19:31, 20:6; Gal 5:20; Ex 22:18; Lev 20:27).

Let me say that I can predict your future.  If you die without Christ you will for certain be cast into the lake of fire for without the Son of God, you have to pay for your own sins.  Why not let Christ pay for them so that you might be in the Kingdom for all eternity? Only stubbornness and pride keep people from humbling themselves and bending the knee to repent, confess, and trust in Him.  Here is your future predicted, not by me specifically, but by God Himself in Revelation 20:11-15:

“Then I saw a great white throne and him who was seated on it. From his presence earth and sky fled away, and no place was found for them.  And I saw the dead, great and small, standing before the throne, and books were opened. Then another book was opened, which is the book of life. And the dead were judged by what was written in the books, according to what they had done.  And the sea gave up the dead who were in it, Death and Hades gave up the dead who were in them, and they were judged, each one of them, according to what they had done.  Then Death and Hades were thrown into the lake of fire. This is the second death, the lake of fire.  And if anyone’s name was not found written in the book of life, he was thrown into the lake of fire.” Choose life in Jesus Christ today or you will most certainly regret it for all time for most certainly “Whoever has the Son has life; whoever does not have the Son of God does not have life” (1 John 5:12).

Jack Wellman is Pastor of the Mulvane Brethren church in Mulvane Kansas. Jack is also the Senior Writer at What Christians Want to Know whose mission is to equip, encourage, and energize Christians and to address questions about the believer’s daily walk with God and the Bible. You can follow Jack on Google Plus or check out his book  Blind Chance or Intelligent Design available on Amazon