Parable of the Prodigal Son: Summary, Meaning and Commentary

What is the meaning of the Parable of the Prodigal Son?  Who do the characters represent and what is there that we can learn from this parable?

The Parable as Told by Jesus

The Parable of the Prodigal Son was told by Jesus in Luke 15:11-32 and came right after He had told the Parable of the Lost Sheep and the Parable of the Lost Coin and His audience were the scribes and Pharisees who were complaining to Jesus that He associated with tax collectors and sinners (Luke 15:1-2) and so this parable was not necessary intended for the disciples alone but it appears that this parable was directed to the religious, self-righteous leaders of the Jews.  It is important to know not only what the parable means but to whom it was spoken to.

“And he said, “There was a man who had two sons.  And the younger of them said to his father, ‘Father, give me the share of property that is coming to me.’ And he divided his property between them.  Not many days later, the younger son gathered all he had and took a journey into a far country, and there he squandered his property in reckless living.  And when he had spent everything, a severe famine arose in that country, and he began to be in need.  So he went and hired himself out to one of the citizens of that country, who sent him into his fields to feed pigs.  And he was longing to be fed with the pods that the pigs ate, and no one gave him anything.”

The prodigal son is believed to be, by many, a Christian who falls away from the truth and then later returns after repentance but this doesn’t seem to fit to whom this was written too or the story itself.  Remember that none of these religious leaders were saved…at least yet.  It may picture a person that is saved but that is not as important as what the parable is teaching us.    For one thing, this youngest son came to his father to ask for his inheritance.  He was not just asking for his inheritance, which is normally divided after the father dies, he was basically telling his father to drop dead, I am done with you and I’m outta here. He went to a “far country” meaning that he wanted to get as far away from his father (God) as possible.  The father seems to be symbolic of God the Father as we will see more clearly later in this parable.  The son finally spends all of his inheritance in sinful activities (Luke 11:30) and finds himself in a pigs sty, feeding the pigs, who ate better than he did.  He then began to think of his father (God?) whose servants had it better than he did and so he “came to himself” (Luke 11:12) and said “How many of my father’s hired servants have more than enough bread, but I perish here with hunger!  I will arise and go to my father, and I will say to him, “Father, I have sinned against heaven and before you.  I am no longer worthy to be called your son. Treat me as one of your hired servants.”  The son rehearsed what he would say to his father long before he would arrive and so he arose to go to his father (Luke 11:20).  God often waits until we are broken so that we will have only God to depend upon and He cannot fix what is not broken because He is opposed to those who are proud and will only give grace to the humble or the humbled (James 4:6).

“But while he was still a long way off, his father saw him and felt compassion, and ran and embraced him and kissed him.  And the son said to him, ‘Father, I have sinned against heaven and before you. I am no longer worthy to be called your son.’ But the father said to his servants, ‘Bring quickly the best robe, and put it on him, and put a ring on his hand, and shoes on his feet. And bring the fattened calf and kill it, and let us eat and celebrate.  For this my son was dead, and is alive again; he was lost, and is found.’ And they began to celebrate.” 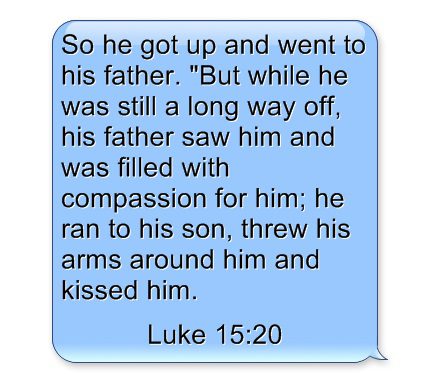 What is amazing here is that the father had been waiting and watching for the son to come back home because he saw him and recognized his son, “while he was still a long way off.”  Is this not like God the Father desires that none should perish but that all would come to Him through Christ (2 Pet 3:9)?  What is more amazing is that the father runs to great him and when he reaches him, he kisses and embraces him (read Psalm 2:12).  Remember that this son was in a pig’s sty and so was likely covered in filth and stunk up to the second heaven. This was not just filth but pig filth, an animal that was detestable to the Jews and this son had even been feeding pigs!

Another interesting point is that the father runs to greet him.  The Jewish culture of that day had disdain for any father that ran and since what they wore were long robes, the father would have had to tuck in his robe into his belt, which would have exposed his legs.   Take about undignified! This was disgraceful in that culture because a father never ran, especially to a son because the son was to honor the father.  The son confesses his sin against the father as a person needs to confess their sins to God (1 John 1:9) because our sins are against God Himself (Psalm 51:4; Gen 39:9).

The son acknowledges that he is unworthy to be called a son of his (aren’t we all?) but this doesn’t stop the father from commanding the servants to bring a robe for the son (does this represent being clothed in the righteousness of Christ or does it symbolize the wedding garment at the wedding feast of the bride of Christ during the marriage supper in Revelation 19:9?), put a ring on his finger (symbolic of being a member of the family and as such, a promise of permanence in the family), and finally to bring him shoes for his feet (since being in God’s presence is holy ground, we must take off our shoes but when we are born again we are a child of God and can walk with God and be in His presence due to Christ’s allowing us access to the throne).  Finally, the father says to bring the fattened calf and kill it (representative of Jesus’ giving up His life as a sacrifice that satisfies the Father?).  Then they can eat and celebrate because this son was lost but now he is found.  This is why it appears that this pictures a person coming to faith and not one that fell away and came back. It does not say the son was found, then lost, and then found again.  This is a first time event.

“Now his older son was in the field, and as he came and drew near to the house, he heard music and dancing.  And he called one of the servants and asked what these things meant.  And he said to him, ‘Your brother has come, and your father has killed the fattened calf, because he has received him back safe and sound.’  But he was angry and refused to go in. His father came out and entreated him, but he answered his father, ‘Look, these many years I have served you, and I never disobeyed your command, yet you never gave me a young goat, that I might celebrate with my friends.  But when this son of yours came, who has devoured your property with prostitutes, you killed the fattened calf for him!’  And he said to him, ‘Son, you are always with me, and all that is mine is yours.  It was fitting to celebrate and be glad, for this your brother was dead, and is alive; he was lost, and is found.’”

The older son resented the younger son being treated like this.  The older son seems to represent Israel and/or the religious leaders of the Jews during that time.  They despised the fact that anyone but themselves could come to God and they considered anyone not Jewish as sinners, just as the old son did his younger brother (Luke 15:30).  The elder son said that he had been with the father for so many years and he had never had a celebration over him!  The Jews of the day believed that they were entitled because of their heritage as Abraham’s children.  What they didn’t understand is that only if you are Christ’s are you really Abraham’s seed (Gal 3:29).  It is grace and not race.  The younger brother was lost (not saved) and was dead (in his sins) but now he is alive (eternal life?) and is found (saved).

Did the Prodigal Son come to himself (Luke 11:12) by himself?   No, it appears that God calls those who come to Christ (John 6:44). This prodigal son was who I was and who every Christian was before they were saved.  They lived a life of filthy sin just like I did (and still do sin but not willfully) because they were lost but God the Father drew you and me (literal the Greek word is “drag”) to Christ.  You did not come to yourself by yourself. This was the work of the Holy Spirit who drew you to see your need for a Savior, convicted you of your sins (Acts 17:11) and regenerated you.  I pray that has happened to you but if not, you are still in your sins and presently you have no peace at all with the Father (Rom 5:1). 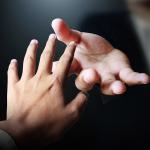 April 21, 2014
Parable of the Good Samaritan: Meaning, Summary and Commentary
Next Post