Parable of the Good Samaritan: Meaning, Summary and Commentary

Who Are the Samaritans?

Samaritans were despised by the Jews because they were known as half-breeds, half Jewish and half Gentile.  When the Northern Kingdoms were taken captive by the Assyrians, they intermarried with them to settle in the place that is called Samaria, just north of Judea.  As usually happens in such cases, they adopt the worship of their false, pagan gods, falling into idolatry.  When the Jews returned to Jerusalem and tried to rebuild the temple, the Samaritans would pour pigs blood in the temple area which was to make the temple unclean and the building project of the temple had to be stopped so that the temple area could be cleaned up again.  This was detestable to the Jews and polluted what they considered to be a holy place; therefore the Samaritans were hated even more than the Roman conquerors.  They would not even walk in Samaria but would go far out of their way, even if it was a longer trip, to avoid entering Samaria because they believed the Samaritans were unclean people. This is precisely why Jesus mentioned the Samaritan in this parable because he would be the least likely to ever help a fellow Jew because the Samaritans also had a hate that was equal to that held by the Jews against the Jewish people because of the way that they were treated by them.

The Parable of the Good Samaritan

In the first place, the name of the Parable of the Good Samaritan is never mentioned by Jesus.  Bible scholars and translators have attached this name because they see man as being a “Good Samaritan” who goes above and beyond where most people would go. A Good Samaritan as opposed to most Samaritans in their minds…pagan, idolators.

What Jesus was telling this lawyer, who is an expert in the Laws of God that the fulfilling of the Law is to Love God and to love your neighbor just as you do yourself.  But “he, desiring to justify himself, said to Jesus, “And who is my neighbor?”

“Jesus replied, “A man was going down from Jerusalem to Jericho, and he fell among robbers, who stripped him and beat him and departed, leaving him half dead.  Now by chance a priest was going down that road, and when he saw him he passed by on the other side.”

The priest represented the religious-acting people.  They talk the talk but rarely do the walk the walk.  This priest went out of his way to avoid the man because as a priest, and we can assume it was a Jewish priest, he didn’t want to make himself unclean by associating with someone who may have had blood on them. He was likely on his way to perform his priestly duties and didn’t want to soil himself which would require him to go through the ritual washings again.  Not only did the priest have to go around the injured man he went to the trouble of passing “by on the other side” indicating that he wanted nothing to do with the injured man.  Incidentally, the man was going down from Jerusalem to Jericho so it was highly likely that this man was a fellow Jew.

“So likewise a Levite, when he came to the place and saw him, passed by on the other side.”

Here was a Levite, an expert in the Law and sadly he ignored what Jesus had just said that the fulfillment of the Law was;  to love God and then love your neighbor as yourself.  The problem was that the Levite didn’t consider the man as his neighbor, even though he was probably a Jew.   Even though he was quite literally his neighbor being Jewish, he didn’t have compassion nor did he want to stop and help.  This may have been due to the fact that the robbers who had beaten and stripped the man might still be in the area and he didn’t want to risk it.  The Law allows for a man to rescue an animal from a pit on the Sabbath and perhaps this occurred on the Sabbath and the Levite felt that it would be breaking the Sabbath (which of course it would not!).  The Levite knew the Law yet refused to obey it which compelled the Jews to help someone when they happened to come upon an injured person.  He surely knew that God is no respecter of persons and has regard for the alien or stranger who desires to obey God and that God accepts a person and that it’s not a matter race but as a matter of grace, but here the Levite refused to even help his fellow Jewish brother and he had the audacity to call himself a Levite.

“But a Samaritan, as he journeyed, came to where he was, and when he saw him, he had compassion.  He went to him and bound up his wounds, pouring on oil and wine. Then he set him on his own animal and brought him to an inn and took care of him.  And the next day he took out two denarii [about a day’s wages] and gave them to the innkeeper, saying, ‘Take care of him, and whatever more you spend, I will repay you when I come back.’  Which of these three, do you think, proved to be a neighbor to the man who fell among the robbers?”  He said, “The one who showed him mercy.” And Jesus said to him, “You go, and do likewise.”

The one that Jews would least expect to help a fellow Jew was a Samaritan.  In the first place, the Samaritan saw that the man had just been beaten and robbed but he went anyway and at his own risk he went to help this man…a Jew who was a natural enemy of the Samaritans.  The Samaritan went right up to him, cleaned and bandaged his wounds pouring oil and wine on them for medicinal purposes and this was at his own expense because oil and wine were not cheap in those days. The oil may have represented the work of the Holy Spirit and the wine may have symbolized the shedding of blood, although Jesus never clarifies their meaning. Then, the Samaritan puts this man onto his own animal which means that the Samaritan has to walk some distance and then puts the man in an inn and pays for the room and board and tells the innkeeper to “take care of him, and whatever more you spend, I will repay you when I come back.”  So the Samaritan spends his own money and he also promises to come back, showing that he has compassion on this Jewish man even though the Jews hated the Samaritans. 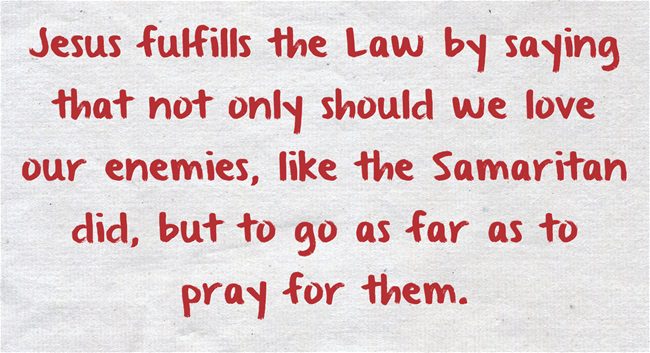 Who was the neighbor in this parable?  It is the one who the Jews hated and the Samaritans who hated the Jews were helped by one who was hated by them; the Samaritan.  Our neighbor doesn’t mean our next door neighbors.  It could mean the stranger you give a helping hand to, the person you give an encouraging word to, the one who hates you should be the one you pray for.  Jesus fulfills the Law by saying that not only should we love our enemies, like the Samaritan did, but to go as far as to pray for them.  When was the last time you prayed for someone that hated you, despised you, and wanted to do you harm?  That is what Jesus expects of those who are His own and those who are Jesus’ enemies He desires that they repent and trust in Him.

April 21, 2014
Parable Of The Talents: Meaning, Summary and Commentary
Next Post

Icons, Russia, and a Church's Dark Age
A couple of my long-standing interests recently came together in a very...
view all Evangelical blogs
What Are Your Thoughts?leave a comment

67 responses to “Parable of the Good Samaritan: Meaning, Summary and Commentary”