What Did Jesus Say or Teach About Hell?

Jesus taught about the reality of hell.  Is this teaching that hell is forever or are the condemned simply burned up and annihilated?

Mark 9:43, 48-49 “And if your hand causes you to sin, cut it off. It is better for you to enter life crippled than with two hands to go to hell, to the unquenchable fire…where their worm does not die and the fire is not quenched.’ For everyone will be salted with fire.”

Jesus describes hell as a reality and He spoke on hell three times as much as He ever did on heaven, thereby signifying the importance on believing in such a place.  Hell is like a fiery furnace and there will be weeping (with anger and/or eternal regret) and gnashing of teeth (in anger and/or in pain).  This weeping and gnashing of teeth is mentioned twice so as to emphasize the reality of hell.

Jesus also said it is a place not where “the” worm never dies but a place where “their” worm does not die.  The fact is that it is their worm which means that it is their own personal gnawing of their conscience for their lifetime of rejecting Christ and this worm never dies, just like the Gehenna fire, which was a trash dump outside the walls of Jerusalem.  That was a place where trash was continually dumped and maggots or worms never died off because there was always something thrown onto it so the worms or maggots had a constant supply of food.

Hell, A Place of Outer Darkness

Matthew 22:13 “Bind him hand and foot and cast him into the outer darkness. In that place there will be weeping and gnashing of teeth.”

Matthew 8:12 “while the sons of the kingdom will be thrown into the outer darkness. In that place there will be weeping and gnashing of teeth.”

Since Jesus is the light of the world and God is light (John 1) then naturally the absence of God is the absence of light.  Remember at Calvary when the Father withdrew during Jesus’ death on the cross?  There were three hours of darkness because for the first time in all eternity, God the Father had to withdraw from Jesus as God cannot look upon sin and when the darkness came, it revealed that God has withdrew.  This is why Jesus felt forsake at the cross and said when the darkness came from the sixth hour (noon) until the ninth hour (3 P.M.) “My God, My God, why have you forsaken Me” (Matt 27:45-46)?  The answer of course was because Jesus had become sin for us (2 Cor 5:21).

The Eternality of Hell 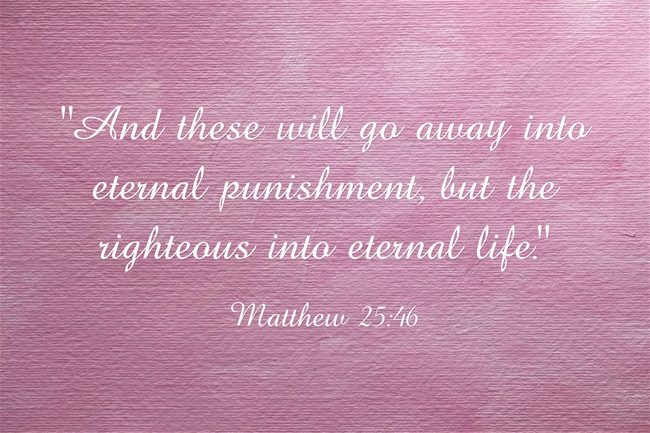 Revelation 14:9-11; 19:3 “If anyone worships the beast and its image and receives a mark on his forehead or on his hand, he also will drink the wine of God’s wrath, poured full strength into the cup of his anger, and he will be tormented with fire and sulfur in the presence of the holy angels and in the presence of the Lamb.  And the smoke of their torment goes up forever and ever, and they have no rest, day or night, these worshipers of the beast and its image, and whoever receives the mark of its name. The smoke from her goes up forever and ever.”

The word for forever or eternal is from the Greek “aionion” describes life which is endless and so must aionios must also describing endless punishment for if eternal (aionion) life is only temporary then it was never eternal life at all, but since “aionion” means life eternal (forever, without end) life then so too is the punishment eternal (aionion).   Here is where the doctrine of heaven and the doctrine of hell stand or fall together.   Since Jesus promises eternal life for all of those who believe and if it is not forever, then Jesus didn’t tell us the truth and if Jesus didn’t speak the truth then His sacrifice was not enough to save us…but if eternal life is granted by believing in Him (John 3:16-17) then eternal punishment is given to those who refuse to believe (John 3:18).   This proves that Jesus’ death “brought life and immortality to light through the gospel” (2 Tim 1:10) and immortality is not a temporary life but it is a life without end.

Hell, A Place of Torment

Luke 16:23 “being in torment, he lifted up his eyes and saw Abraham far off and Lazarus at his side.”

Revelation 14:10-11 “he also will drink the wine of God’s wrath, poured full strength into the cup of his anger, and he will be tormented with fire and sulfur in the presence of the holy angels and in the presence of the Lamb.  And the smoke of their torment goes up forever and ever, and they have no rest, day or night, these worshipers of the beast and its image, and whoever receives the mark of its name.”

The torment goes on for all time and even the smoke of their torment is forever and ever and “goes up” and this torment takes place “with fire and sulfur” so it is a tangible, real event in time and space where all five senses are involved.  Remember the account of the Rich Man and Lazarus where the rich man begged Abraham to bring even a tiny drop of water to bring him some relief from his vicious thirst by saying “Father Abraham, have mercy on me, and send Lazarus to dip the end of his finger in water and cool my tongue, for I am in anguish in this flame.’  But Abraham said, ‘Child, remember that you in your lifetime received your good things, and Lazarus in like manner bad things; but now he is comforted here, and you are in anguish.  And besides all this, between us and you a great chasm has been fixed, in order that those who would pass from here to you may not be able, and none may cross from there to us” (Luke 16:24-26).  Clearly all five senses are still being felt; for example a great thirst and a feeling of heat but also notice that the memory remains intact so that all of the memories of a lifetime of rejecting the gospel will forever be recalled and maybe this is why there will be so much “weeping and gnashing (grinding) of teeth.”

Luke 12:5 “But I will warn you whom to fear: fear him who, after he has killed, has authority to cast into hell. Yes, I tell you, fear him!”

The conclusion of the matter is to fear God and live.  For those don’t believe that they don’t deserve to go to hell but heaven may well being destined to hell but for those who know that they deserve hell and don’t deserve heaven may be going to heaven.  The surprising thing is not that only some go to heaven (Matt 7:13-14)but that anyone goes to heaven for we all rightly deserve the wrath of God but God extends to anyone who would believe in the Son of God His grace and mercy.  Today may be your day of salvation if you have not yet been saved (2 Cor 6:2) but for those who refuse to believe in Christ, they stand condemned at this moment (John 3:18).  Some say they don’t believe in hell but not believing in something doesn’t mean it isn’t real.  Some say that a good God wouldn’t send anyone to hell but they have just made a god in their own image.  They reason that “if the God of the Bible really exists, then they will gladly go to hell.”  How sad.  Others say that “their God is a God of love and doesn’t condemn people to hell.”  I say, “Yes, you are right. Your God of all love wouldn’t send anyone to hell because He doesn’t exist.  I say as Jesus says “fear him who, after he has killed, has authority to cast into hell. Yes, I tell you, fear him!’

Charles Spurgeon shows just how important the realization of hell is in witnessing to the lost as he wrote: “If sinners be damned, at least let them leap to Hell over our dead bodies. And if they perish, let them perish with our arms wrapped about their knees, imploring them to stay. If Hell must be filled, let it be filled in the teeth of our exertions, and let not one go unwarned and unprayed for.”

A good book to check out: 7 Biblical Signs Of The End Times

May 8, 2014
Top 7 Bible Verses About Work, Work Ethic or Employment
Next Post

May 8, 2014 What Does The Bible Say About Cremation? A Christian Study
Recent Comments
88 Comments | Leave a Comment
Browse Our Archives
Related posts from Christian Crier