What are seven of the top Bible verses about work?  What do these tell us about our work ethic or employment?

Ecclesiastes 9:9b-10 “in your toil at which you toil under the sun. Whatever your hand finds to do, do it with your might, for there is no work or thought or knowledge or wisdom in Sheol, to which you are going.”

This is one of my favorite Bible verses on employment because Solomon says that whatever our job is you are to “do it with [all of] your might.”  Wherever God has placed us, it is a holy vocation and not just a job.  We work for God and not just our employer. Ultimately, God will reward us, if not in this life, surely in the life to come.  For those who hate their job, realize that where you are is no accident.  You work for God and so we should do our jobs the very best that we can because we are an example to those outside of the household of faith.  We can make a good impression for the Lord or we can bring shame to the cause of Christ so we ought to “obey in everything those who are your earthly masters, not by way of eye-service, as people-pleasers, but with sincerity of heart, fearing the Lord” (Col 3:22).  In other words, don’t just start looking busy when the boss is watching but even when he isn’t, for God is always watching everything you do.

Working for the Lord

Colossians 3:23-24 “Whatever you do, work heartily, as for the Lord and not for men, knowing that from the Lord you will receive the inheritance as your reward. You are serving the Lord Christ.”

Once more, the theme of doing the best that we can where we can is doing it for God.  Here we are specifically told that we “are serving the Lord Christ” and not just our employers.  The Lord is the one who will reward us in the end, not the employer.  I am not saying that our employer won’t reward us for our hard work and diligence but that financial reward cannot be brought with us to heaven.  What God rewards us for is for all eternity and can be enjoyed in the Kingdom of Heaven.  That is our inheritance, not what we gain while on earth. We do it “for the Lord and not for men.”  I worked for seven long years as a janitor and scrubbed bathroom floors, toilets, urinals and took out the trash but I tried to make it an offering up to the Lord and for His glory.  Whatever I did, I did for Him and not for my boss.  That should be your frame of mind, no matter what job you have.  My wife once told me when there is no job below our dignity as long as it is honest work.

Deuteronomy 24:14 “You shall not oppress a hired worker who is poor and needy, whether he is one of your brothers or one of the sojourners who are in your land within your towns.”

Whether you are an employer, a boss or a supervisor, God warns us to not oppress those who work for us and especially the poor and the needy.  God tells us through James that “the wages of the laborers who mowed your fields, which you kept back by fraud, are crying out against you, and the cries of the harvesters have reached the ears of the Lord of hosts” (James 5:4).  This is aligned with Deuteronomy 24:14 and should be taken seriously because these “cries of the harvesters (or laborers) have reached the ears of the Lord of hosts” and He will not be happy if you exploit or take advantage of your hired help.  You ultimately will answer to God for that. It is nothing less than robbing an employee if you are not paying them what is their due.

No Quick Way to Money

Proverbs 12:11 “Whoever works his land will have plenty of bread, but he who follows worthless pursuits lacks sense.”

There is no short cut to hard work and having sustenance.  Nothing can replace hard work.  For those who follow get-rich quick-schemes, these are really “worthless pursuits” that “lacks sense.”  Work is its own reward but hard work always pays off, if not in this life, in the life to come.  There are so many welfare frauds who are really robbing those who work hard and pay taxes.  These people lack bread because they lack the effort of working hard and someday those things done in secret will be exposed openly because “All hard work brings a profit, but mere talk leads only to poverty” (Prov 14:23).

Work is a Divine Institution

Genesis 2:15 “The Lord God took the man and put him in the Garden of Eden to work it and keep it.” 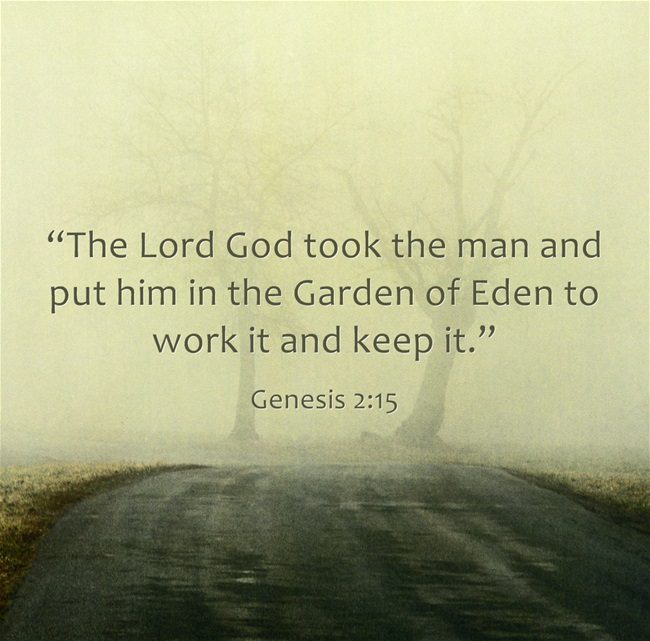 Here is another indication that it is God who places us where we are.  The Lord took Adam and “put him in the garden…to work it and keep it. “  Work is a divine institution because Adam was commanded to work and this was before the fall had occurred so we see work, once again, as a holy vocation from God for God puts us where we are and tells us to “work it and keep it” wherever that might be.  Work is not a curse from God but a blessing.  The curse of the hard toil of work only came after the fall in the Garden, not before.

No Work, No Food

Second Thessalonians 3:10-12 “For even when we were with you, we would give you this command: If anyone is not willing to work, let him not eat.  For we hear that some among you walk in idleness, not busy at work, but busybodies.  Now such persons we command and encourage in the Lord Jesus Christ to do their work quietly and to earn their own living.”

Paul had problems with the church at Thessalonica because they were expecting the Lord to return at any moment.  There is nothing wrong with that in itself because He could come at any time.  The problem was that many in this church had just stopped working and while waiting for the Lord’s return, they were asking for handouts from the other church members who were still working.  This angered Paul and rightly so because he said that if they are “not willing to work [then] let him not eat.”  He heard that many were walking “in idleness, not busy at work” but only being “busybodies” (gossips).  Paul commanded that these people “earn their own living” and not to leach off of those who are still laboring.

Poverty Comes to the Sluggard

Proverbs 24:30-34 “I passed by the field of a sluggard, by the vineyard of a man lacking sense, and behold, it was all overgrown with thorns; the ground was covered with nettles, and its stone wall was broken down. Then I saw and considered it; I looked and received instruction. A little sleep, a little slumber, a little folding of the hands to rest, and poverty will come upon you like a robber, and want like an armed man.”

When Solomon wrote that he saw a field and a vineyard that was “overgrown with thorns [and] the ground was covered with nettles (weeds), and its stone wall was broken down” and he understood why. It was the owner saying “a little sleep, a little slumber, a little folding of the hands to rest” but this would result in poverty.  A slumberer may be sleeping when they should be getting up to go to work.  A “folding of the hands to rest” is obvious and a “little sleep” is sleeping when one ought to be getting up in the morning and working.  No wonder Solomon knew that “poverty will come upon [them] like a robber, and want like an armed man.”  This is what Paul was saying.  If a man doesn’t work, he will go hungry and end up in poverty.

Paul tells Timothy that “if anyone does not provide for his relatives, and especially for members of his household, he has denied the faith and is worse than an unbeliever.”  That means that if a person doesn’t work and support their own family, they are to be treated as an unbeliever because what Christian refuses to care for his or her own family?  It is clearly sin not to work, even if it’s in the home, or if you are retired, perhaps you can volunteer.  I was not able to find anyone in the Bible where they retired and drew a pension or from retirement and then did nothing for the rest of their lives.  I am not saying that retirement is sin but the person who completely quits working at anything, even as small as it is, is wasting a life that is meant to spent for the glory of God because “Whatever you do, work heartily, as for the Lord and not for men, knowing that from the Lord you will receive the inheritance as your reward. You are serving the Lord Christ” (Colossians 3:23-24).

May 8, 2014
Were There Giants In The Old Testament? What Does The Bible Teach?
Next Post 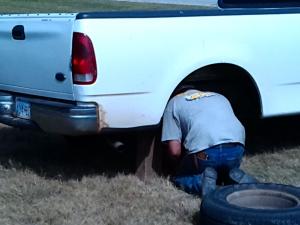