Were There Giants In The Old Testament? What Does The Bible Teach?

David fought Goliath who was said to be a giant.  Where there really giants in the Old Testament?  What does the Bible say about this?

The Word Giants in the Bible

Unfortunately, the word that the Bible uses for “giant” is a mistranslation by the Greek translators of the LXX in the second and third centuries B.C.   Even the English translators followed the same mistranslation pattern as the Greek translators and rendered the Hebrew word “gibor” for  giant but the Hebrew word “gibor” literally means “mighty man, warrior.”  Some of the more modern translations like the Revised Standard Version (RSV), the North American Standard Bible (NASB), and the English Standard Version (ESV) use the proper translation “mighty man, warrior” and not “giant.”  Here are some comparisons.

Job 16:14 “He breaks through me with breach after breach; He runs at me like a warrior” (NASB).

Job 16:14 “He breaketh me with breach upon breach, he runneth upon me like a giant” (KJV). 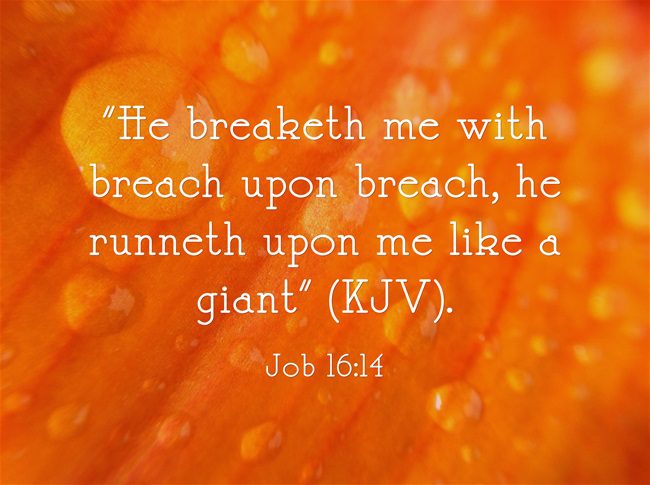 Were the Nephilim Giants?

In Genesis 6:4 the sons of Anak were part of the Nephilim and were referred to as the sons of God and the daughters of men which was part of the human race before the Flood.  The descendants of the Nephilim were still around many hundreds of years later when Moses sent spies into Canaan and the report came back that “there we saw the Nephilim (the sons of Anak, who come from the Nephilim), and we seemed to ourselves like grasshoppers, and so we seemed to them” (Num 13:33).  There were no real measurements given in the Old Testament that we could use that would give us a precise idea on just how big the Nephilim were so we must translate cubits for feet and inches.   The fact is that a cubit, the distance from the elbow to the tip of the middle finger, varied significantly depending upon whose cubit was being used to measure.   In the ancient Egyptian document called The Craft of the Scribe, one of the ancient inhabitants of Canaan measured between 6’10’’ and 8’7’’.  That would make any Israelite think that they were grasshoppers compared to the average Jew at the time who was only 5’8”.

Recent Giants in the World

It is not that amazing to have someone being almost nine feet tall and many being more than eight feet tall. The tallest men in the world come mostly from the U.S.  The tallest that we know of was the American Robert Wadlow, who died in 1940 at 8’ 11”.  John Rogan was 8’ 9” tall (died 1905) and John Carroll was 8’ 7 ½“ tall (died 1969) but these Americans were not alone.  There were dozens of men who lived since 1935 who pushed beyond eight feet and there are just as many today, although most living today are just over eight feet tall.  If the spies that spied out the land of Canaan saw these men today, then they would no doubt have thought that they were giants too.  Remember that fear can sometimes exaggerate things and that is the sense we get from these spies as the reason why they didn’t think that they could conquer the land.  They were fearful of invading such a formidable army of men so it may have been more like the problem seemed gigantic to them than the inhabitants.

Was Goliath a Giant?

Bible scholars now generally agree that Goliath is not much bigger than the men who are the tallest today and those of a few years ago who were eight feet and several inches tall.  Today they believe that Goliath was not ten feet tall but closer to 9’9”.  That is quite possible because that would be just less than a foot taller than the men who are the tallest in recorded history.  The Septuagint uses “gigas” and “titanes” where the word giant is used.  The Rephaim are thought to be the same as the Nephilim, and again, compared to the size of the Jews, there were “giants.”  In Deuteronomy 3:11 it says that “only Og the king of Bashan was left of the remnant of the Rephaim. Behold, his bed was a bed of iron. Is it not in Rabbah of the Ammonites? Nine cubits was its length, and four cubits its breadth, according to the common cubit.”  That would make Og’s bed thirteen feet long and six feet wide.  That is a giant bed in proportion to what the Jews must have slept on in that day.  That does not mean that Og was 13 feet tall but even today a person’s bed is longer than they are tall so King Og was near the same height as the Nephilim, about eight to nine feet tall.

There were giants in the Old Testament and these were mighty men and warriors that exceeded eight and nine feet.  They were formidable but they were no match for God because when David faced Goliath, he knew that victory was sure because when God is for you, there is no one who can be against you (Rom 8:31)?  If you have never chosen to repent, confess your sins, and trust in Jesus Christ as Savior, then your problem is not just gigantic, it is colossal.  Nothing will save you on the day of His visitation and when that day comes, and no one knows when that will be, it will be too late so today is your day of salvation (2 Cor 6:2).  If not today, when, because no one knows what tomorrow may bring.