Fathers Role in the Home

Deuteronomy 6:6-9 “And these words that I command you today shall be on your heart.  You shall teach them diligently to your children, and shall talk of them when you sit in your house, and when you walk by the way, and when you lie down, and when you rise.  You shall bind them as a sign on your hand, and they shall be as frontlets between your eyes.  You shall write them on the doorposts of your house and on your gates.”

Fathers are commanded to teach their children the commands of the Lord and to do this “when you sit in the house” (when your children are at home with you), “when you walk by the way” (when you go to the park, when you drive then somewhere, at the ballgame, anywhere you go with them), “and when you lie down” (when they go to bed God’s Law and His requirements should always be the last thing they hear about), “and when you rise” (first thing in the morning when possible).  A father should be reading to their children daily from the Bible and the Word should be on the “doorposts” of the house or on “your gates” which is the first thing they see when leaving home (the posts could be plaques with Scriptures or the Ten Commandments) and the first thing they see when they get home.   The father represents to the family what the high priest was to Israel.  He was the spiritual leader and the spiritual head of the family.  God will hold them accountable.

Fathers Give Direction for their Children

Psalm 127:3-5 “Sons are a heritage from the LORD, children a reward from him.  Like arrows in the hands of a warrior are sons born in one’s youth.  Blessed is the man whose quiver is full of them. They will not be put to shame when they contend with their enemies in the gate.”

Sons and daughters are a mother and father’s heritage but above all they are a heritage from the Lord.  These children of ours are only ours (or were if they’re grown) for a time but ultimately they belong to God as they are “a reward from him.”  Children are a gift of God.  When Esau saw Jacob’s children he asked whose they were and Jacob wisely said that they were “The children whom God has graciously given your servant” (Gen 33:5) so he acknowledge that his children were from God. The man who has many children (“whose quiver is full”) is said to be blessed by God.  Children might be like the arrows that are temporarily “in the hands of a warrior (father)” and the father has to do his best to aim them in the direction that they go but ultimately things affect where the arrow fails but the father sends them out and aims for a godly target but the arrows themselves determine where they eventually fall.

Ephesians 6:4 “Fathers, do not provoke your children to anger, but bring them up in the discipline and instruction of the Lord.”

Fathers can provoke or induce their children to anger by unreasonable expectations, demanding perfection in them, deciding what they want them to be to the exclusion of what the child desires to be as an adult, and by ruling them like a tyrant with an iron fist who has no flexibility.  You can be sure that this type of upbringing will result in an angry, demanding, perfectionist adult that no one will want to be around.  Rather, “bring them up in the disciple and instruction of the Lord.”  How does the Lord bring us up and discipline us?  His is a loving discipline that has the higher good in mind and He instructs us through trials, suffering, and in His Word.  Fathers can make or break a child so God command’s fathers, not just suggests to them, to bring them up in the same type of discipline that the Lord deals with us and God is not unjust, unfair, and over-demanding.  Neither should we be.  Be patient, understanding, loving, caring, and compassionate for God is all of these and more to us fathers. 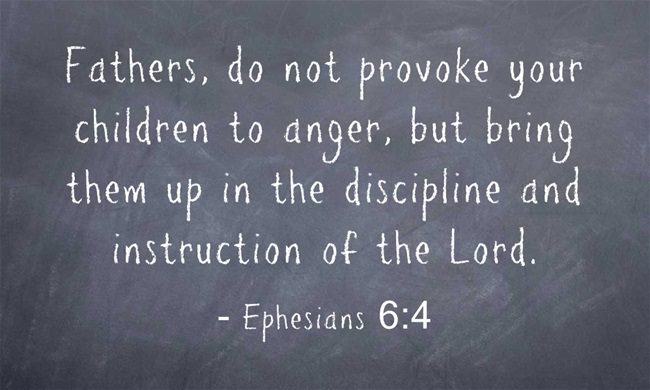 Turning Father’s Hearst to their Children

Malachi 4:6 “And he will turn the hearts of fathers to their children and the hearts of children to their fathers, lest I come and strike the land with a decree of utter destruction.”

This verse shows that fathers have a lot at stake by turning or not turning their hearts to their children and if a father turns his heart to his children, you can be sure “the hearts of the children [will be turned] to their fathers.”  The word for turning is the Hebrew word “shuwb” which means “turn back to” or “return” indicating that the father’s hearts where not directed to the children in the first place.  This returning could also be seen as repenting of their own selfish ways and being generous with their time spent with their children.  The last Gallop Poll I can remember was that fathers spent an average of 8 minutes with each of their children…per week!  That is not turning to their children but they are already turned away.  What happens to families that disintegrate and dissolve in society?  The nation goes as families go because families are the backbone of a nation and so unless fathers repent and turn back to their children (or turn to them for the first time) then the “land (or any nation will be struck) with a decree (or order or command) of utter destruction.”  This sounds extremely serious.  Maybe this turning back to the children reveals that at one time, fathers hearts where originally turned to or directed at their children.  Not so much in today’s society I am afraid to say…even among Christian families to which I am not guiltless.  Look what parental neglect did to King David’s family!

A Father’s Discipline is a Father’s Love

Hebrews 12:5-11 “And have you forgotten the exhortation that addresses you as sons? “My son, do not regard lightly the discipline of the Lord, nor be weary when reproved by him. For the Lord disciplines the one he loves, and chastises every son whom he receives.” It is for discipline that you have to endure. God is treating you as sons. For what son is there whom his father does not discipline?  If you are left without discipline, in which all have participated, then you are illegitimate children and not sons. Besides this, we have had earthly fathers who disciplined us and we respected them. Shall we not much more be subject to the Father of spirits and live? For they disciplined us for a short time as it seemed best to them, but he disciplines us for our good, that we may share his holiness. For the moment all discipline seems painful rather than pleasant, but later it yields the peaceful fruit of righteousness to those who have been trained by it.”

Here the author of Hebrews quotes Proverbs 3:10-11 where he writes, “My son, do not despise the Lord’s discipline or be weary of his reproof, for the Lord reproves him whom he loves, as a father the son in whom he delights.”  This shows that discipline is equal to love and the opposite of love is not hate…it is indifference or apathy.  I disciplined my children when they were young because I didn’t want them to run out into the street and get hurt or killed.  My discipline was out of love and so fathers should discipline not out of indiscriminate punishment but out of a loving, caring and nurturing feeling for them.  If they are not disciplined then can you really say that you love them (Heb 12:7)?  It might seem really hard on everyone concerned at the time of discipline (Heb 12:11) but the fruit of such loving discipline is that of a child growing up to respect others and live in obedience in society (for the most part, of course there are no guarantees).