Was Jesus Black? What Race Was Jesus Christ?

There has been no small controversy over the idea that Jesus may have been black.  What race was Jesus Christ according to church historians, secular historians, and above all the Bible?

Matthew chapter one gives Jesus’ genealogy and it is expressly Jewish.  Jesus is called the Son of David who is the son of Abraham (Matt 1:1).  It goes back from Jesus to David and finally to Abraham (Matt 1:1).  In fact, it goes all the way back to His line in the tribe of Judah.  Matthew even counts the number of generations and “all the generations from Abraham to David were fourteen generations, and from David to the deportation to Babylon fourteen generations, and from the deportation to Babylon to the Christ fourteen generations” (Matt 1:17).  There is absolutely no evidence that the Jew’s had black skin, not that it would matter, but we must restrict our findings based upon what the Bible says and not speculation or conjecture.  There are also no reliable extra-biblical sources or even secular historical sources that say that Jesus was black. Hebrews likely had olive-colored skin, not black or white as some pictures falsely showed Christ to be. Matthew was written to the Jewish Christians who could see that Jesus was clearly the prophesied Messiah that would be this Promised Seed of Abraham (Gen 12:3) and the descendant (son) of David.

Jesus was the son of David but David’s Lord.  This sounds confusing and Jesus used this as a way to beat the religious leaders at their own game who were constantly trying to trip Jesus up with tricky, theological conundrums.  We read this account in Mark 12:35-37

“How can the scribes say that the Christ is the son of David?  David himself, in the Holy Spirit, declared “‘The Lord said to my Lord, “Sit at my right hand, until I put your enemies under your feet.”’ David himself calls him Lord. So how is he his son?”

When Jesus was called the Son of David, and He was so many times by so many people, even those with diseases, sicknesses, blindness, and even the religious leaders, it was the fulfillment of prophecy that the Messiah would be a son of David and come from Bethlehem, which is where He was born (Luke 2:15).  Micah 5:2 states where He was to be born, writing “But you, O Bethlehem Ephrathah, who are too little to be among the clans of Judah, from you shall come forth for me one who is to be ruler in Israel, whose coming forth is from of old, from ancient days.”

Does it really matter whether Jesus was black or not? No, the fact is that He is the sinless Lamb of God that died for sinners and is the Savior of those who repent and trust in Him.  It is all about grace and never about race for God is no respecter of persons, creed, nationality, tongue or color (Acts 10:34-35) and this is because “There is neither Jew nor Greek, there is neither slave nor free, there is no male and female, for you are all one in Christ Jesus.  And if you are Christ’s, then you are Abraham’s offspring, heirs according to promise” (Gal 3:28-29). 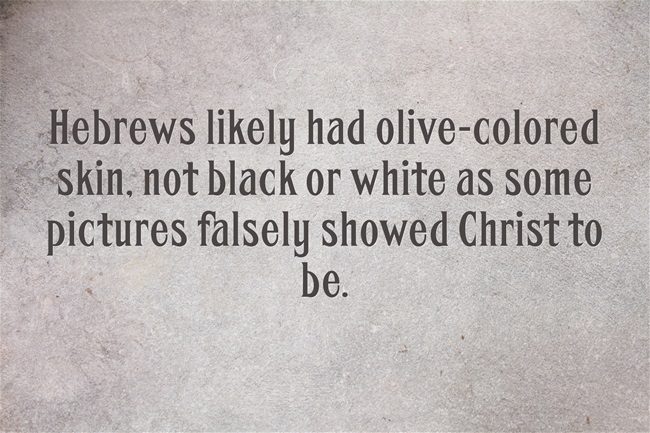 There is little doubt that since Jesus was born a Jew He had to have the attributes of other Jews and there is no recorded historical accounts of black Jews in His time, however there were black Jews who had converted to Judaism but that is no reason to believe that Jesus was black.  The descendants of Abraham all had olive colored skin with a light brown complexion just as do all Jews around the world today, no matter what part of the world they live in.  Hebrews 7:14 clearly states that “it is evident that our Lord was descended from Judah, and in connection with that tribe Moses said nothing about priests” (Heb 7:14). Jesus being from Nazareth and being a Galilean meant that He was easily identifiable as to where He came from, just like Peter was (Matt 26:69).

There is also something critical in the fact that Jesus was Jewish.  The Messiah that was prophesied would be the Jewish Messiah and not from any other nation or ethnicity. Even when Jesus was nailed the to cross, Pontius Pilate ask Jesus if He was the King of the Jews to which Jesus agreed (Mark 15:2) and was proclaimed to be on the cross as “King of the Jews” (Mark 15:26).  Even the “chief priests with the scribes mocked him to one another, saying, “He saved others; he cannot save himself. Let the Christ, the King of Israel, come down now from the cross that we may see and believe” (Mark 15:31-32).

Are There Black Jews?

Since Israel is so close to Africa, it is very possible that some of the Jews expelled by the Rome from Judea traveled to and lived in Africa.  Some of the Jews could easily have intermarried with blacks but this has nothing to do with Jesus’ ethnicity and His being 100% Jewish by lineage (Matt 1).  Some so-called Black Hebrews claim that they are descendants of the Jews and it is possible since some may have intermarried, there could be some but those of the nation of Israel originally were all ethnic Jews.

Even today there are blacks that claim that they are of Jewish descent and they practice very ancient Jewish customs but it is not whether they have Jewish blood in them but whether they are true, 100% descendants of the biblical Hebrews.  Again, this has no bearing on Jesus being Jewish and the fact that He was a descendant of the Hebrews is well established.  Today, we don’t look at a person’s skin color as to whether they can be a spiritual descendant of Abraham because “For no one is a Jew who is merely one outwardly, nor is circumcision outward and physical. But a Jew is one inwardly, and circumcision is a matter of the heart, by the Spirit, not by the letter” (Rom 2:28-29) and really “There is neither Jew nor Greek, there is neither slave nor free, there is no male and female, for you are all one in Christ Jesus” so the fact is that “if you are Christ’s, then you are Abraham’s offspring, heirs according to promise” (Gal 3:28-29).

Who is your king?  If you are not born again or literally born from above (John 3:3) then He is not only your king but He will be your judge (Rev 20:11-15) but if you bow the knee today and humble yourself and repent and confess Him as Lord (John 3:16-17) and trust in Him alone (Acts 16:30-31) then this King of kings and Lord of lord will also be your Savior.  Decide today before He does return or you die in your sins for there is no other way that we must be saved except by the name of Jesus Christ (Acts 4:12).

June 2, 2014
What Does the Bible Say About the Sins of the Father?
Next Post

America | Wrong, Right, and Righteousness
i. The last verse of the book of Judges is like an...
view all Evangelical blogs
What Are Your Thoughts?leave a comment
Copyright 2008-2020, Patheos. All rights reserved.