What Does the Bible Say About the Sins of the Father?

The Sins of the Father

Exodus 20:5 “You shall not bow down to them or serve them, for I the Lord your God am a jealous God, visiting the iniquity of the fathers on the children to the third and the fourth generation of those who hate me.”

Exodus 34:6-7 “The Lord passed before him and proclaimed, “The Lord, the Lord, a God merciful and gracious, slow to anger, and abounding in steadfast love and faithfulness, keeping steadfast love for thousands, forgiving iniquity and transgression and sin, but who will by no means clear the guilty, visiting the iniquity of the fathers on the children and the children’s children, to the third and the fourth generation.”

Is God saying that the children and the grandchildren of the father would have to pay for the sins of their father?  What does God mean by this?  Especially since Deuteronomy 24:16 says “Fathers shall not be put to death for their sons, nor shall sons be put to death for their fathers; everyone shall be put to death for his own sin” and that “The son will not bear the punishment for the father’s iniquity, nor will the father bear the punishment for the son’s iniquity; the righteousness of the righteous will be upon himself, and the wickedness of the wicked will be upon himself” (Ez 18:20). We do know that “as in Adam all die, so also in Christ shall all be made alive” (1 Cor 15:22).  The same “all” that die in Adam and from the original sin nature that we have all inherited, the same “all” can “be made alive” by repentance and faith. 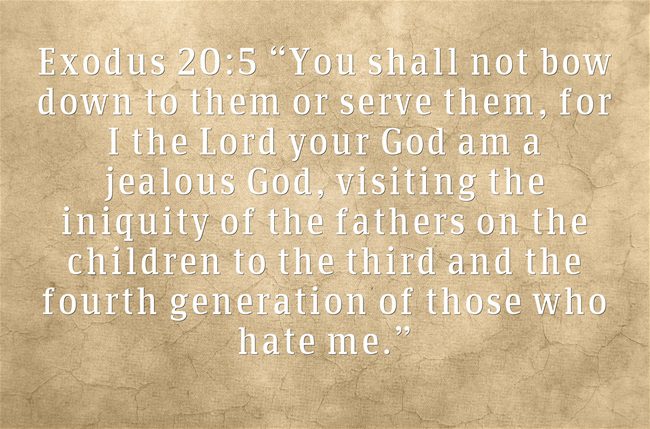 As the Father Goes, so Goes the Family

What God is saying is that if a father misleads his family, the family will pay for it.  Each will have to pay for their own sins but the father could have prevented many of the sins that his children and grandchildren would fall into had he led his family in obedience to the Law of God.  The effects of this fatherly mismanagement would be felt by multiple generations because what has been sown will be reaped because God cannot be mocked (Gal 6:7).  God is not punishing the children for their father’s sins but they are feeling the consequences and having to pay for them.  That is what God means in Exodus 20 and 34.  These verses deal with the descendants of those children who would follow their father’s example of disobedience but each one of us are ultimately responsible for our own sins and this is what Ezekiel 18 and Deuteronomy 24 is saying.  The father’s disobedience to God’s commandments have a ripple effect that keep on going until some other father in his lineage breaks that cycle.

We cannot read these verses by themselves.  Anytime there is an unclear passage we must read other plain passages so that we can clarify the unclear.  In the first place, those who are too young to know good from evil cannot be responsible for knowing and obeying God.  Jeremiah addresses this question in chapter 16:10-13 “Why has the Lord pronounced all this great evil against us? What is our iniquity? What is the sin that we have committed against the Lord our God?’  then you shall say to them: ‘Because your fathers have forsaken me, declares the Lord, and have gone after other gods and have served and worshiped them, and have forsaken me and have not kept my law, and because you have done worse than your fathers, for behold, every one of you follows his stubborn, evil will, refusing to listen to me.  Therefore I will hurl you out of this land into a land that neither you nor your fathers have known, and there you shall serve other gods day and night, for I will show you no favor.’”

God says that those who disobey God cannot blame their fathers because sometimes they “have done worse than [their] fathers” did, therefore they will have to pay for their own iniquities because God says that “every one of you follows his stubborn, evil will, refusing to listen to me.”  There is a connect to the disobedience of the previous fathers though because they were worshiping other gods which are not gods at all and this is breaking all three of the first of the Ten Commandments.

John 9:1-3 “As he passed by, he saw a man blind from birth.  And his disciples asked him, “Rabbi, who sinned, this man or his parents, that he was born blind?”  Jesus answered, “It was not that this man sinned, or his parents, but that the works of God might be displayed in him.”

Perhaps the disciples had read the passages in Exodus 20 and 34 and had not properly understood the context of those verses.  It seems apparent that they may have thought that the man’s or the man’s parents had sinned but Jesus corrects their misunderstanding by telling them “It was not that this man sinned, or his parents, but that the works of God might be displayed in him.”  Jesus did not say that the man or his parents might not have sinned and may have been the reason that this man was born blind.   The man could have been blinded by a mother who drank heavily during her pregnancy and had fallen or by a father who struck the woman when she was pregnant or maybe even the man might have caused his own blindness by falling and striking his head during a drunken stupor.  Jesus knew that this was not the case and so told the disciples that the son was not paying for his parents sins “but that the works of God might be displayed in him” by Jesus’ restoring his sight.   Jeremiah prophesied of a day where no longer will it be said that “The fathers have eaten sour grapes, and the children’s teeth are set on edge.’ But everyone shall die for his own sin. Each man who eats sour grapes, his teeth shall be set on edge” (Jer 31:29-30).

Psalm 51:5 “Behold, I was brought forth in iniquity, and in sin did my mother conceive me.”

David plainly says that we are born into a sinful state and it even begins at conception.  For this reason, we have only ourselves to blame for our own sins and once we reach the age of accountability, whatever age that is (God only knows), we cannot blame our parents.  Every single human ever born, except for Jesus Christ, has sinned.  You don’t have to teach a young child to lie or to take away something that is not theirs or to stop throwing things or getting angry.  They are born with a sinful nature.  No one had to teach them…they were naturally sinners at birth and we all earn as our wages eternal death (Rom 6:23) as we all fall short of God’s glory (Rom 3:23).

Today, Christians can say with Paul that “God shows his love for us in that while we were still sinners, Christ died for us.  Since, therefore, we have now been justified by his blood, much more shall we be saved by him from the wrath of God.  For if while we were enemies we were reconciled to God by the death of his Son, much more, now that we are reconciled, shall we be saved by his life.  More than that, we also rejoice in God through our Lord Jesus Christ, through whom we have now received reconciliation” (Rom 5:8-11) and we now have peace with God (Rom 5:1) because Jesus’ own righteousness has been imputed toward our account and now the Father sees us as He does Jesus (2 Cor 5:21) however “whoever does not obey the Son shall not see life, but the wrath of God remains on him” (John 3:36b) and that is you if you have never repented and trusted in Christ. Today, change that and have the wrath of God removed from off of you forever.

June 2, 2014
5 Important Bible Verses For The Hurting and Sick To Read
Next Post