Should Christians Be Tolerant of Other Religions and Beliefs?

Should Christians Be Tolerant of Other Religions and Beliefs? September 2, 2014 Jack Wellman

Christians are to be salt and light in this world but does this mean that we should be tolerant of other religions and beliefs?

The Definition of Tolerance

Tolerance has many definitions.  It depends on who you ask.  Generally speaking, tolerance is the capacity of respecting and recognizing the beliefs or practices of others who differ from our own.  Literally, it is the willingness or the ability to tolerate the existence of opinions, beliefs, or behaviors that one does not necessarily agree with or practice themselves.  We might have a family member that has a much different set of values and beliefs than we do and so by accepting his or her beliefs and values and remaining civil in their presence, it can be said of us that we are tolerant of them.  We can be tolerant of something while simultaneously disagreeing with it.  We can agree to disagree but not be disagreeable.  So, should Christians be tolerant of other religions outside of their own faith?  What does the Bible say about such tolerance?

Christians are often called narrow-minded and prejudiced because they believe that there is only one true way to receive eternal life but is this “one way” belief of our own origination or imagination?  No, this is what Jesus said; “I am the way, and the truth, and the life. No one comes to the Father except through me” (John 14:6).  He never said I am one of the ways, I am one of the truths and I am one of the ways to eternal life; rather He said that He is the way, the truth, and the life and there is no other.  If we believe that there is only one way to be saved, we only believe what Jesus said and this is Jesus’ teaching, not ours.  If people disagree with us about this, it is really their disagreeing with Jesus. Clearly, this is what the Scriptures teach, “For everyone who calls on the name of the Lord will be saved” (Rom 10:13).   This necessarily means that if someone calls on the Lord’s name they will be saved.  The antithesis of this must also of necessity be true; “Whoever does not call on the name of the Lord will not be saved.”  There is only one name given to men, women, and children by which they can be saved and that name is Jesus Christ’s (Acts 4:12).  It should not amaze us that Jesus is the only way to be saved but considering the sinfulness of mankind, it is amazing that there is any way at all to be saved.

If you were following a narrow path on a mountain side and following a guide, you wouldn’t think that your guide is narrow minded or prejudiced because he knows the only way across the side of the mountain. He has been there many times and so to think that he is being intolerant of other ways is to misunderstand that there is no other way than the way that he is taking.  To accept another way or your own belief could result in death.

Is there Objective Truth?

Salvation is from God

We must tolerate other people’s beliefs, even if we know that they are wrong.  We ourselves would be in this same state of disbelief in Christ except the Spirit of God revealed these things to us.  We are in no way superior to those who don’t believe.  We are only in a better position on the coming Day of Judgment and that is only because Jesus became sin for us so that when the Father sees us, He sees Jesus’ own righteousness and not our sinfulness (2 Cor 5:21).  That is not something that we did but it is what God has done.  For those who believe in Muhammad’s way, Confucius, Buddha, Mormonism, or Jehovah’s Witnesses, we must realize it is only by the grace of God that we are not in the same belief systems ourselves.  When we understand that salvation is fully a work of God and that God receives all the glory for our being saved, we will be more tolerant of those who differ in their beliefs.  If we understand these things, we can tolerate others; indeed it should motivate us to pray for them so that their blindness can be removed so that they are able to see the glorious light of the gospel of Jesus Christ. 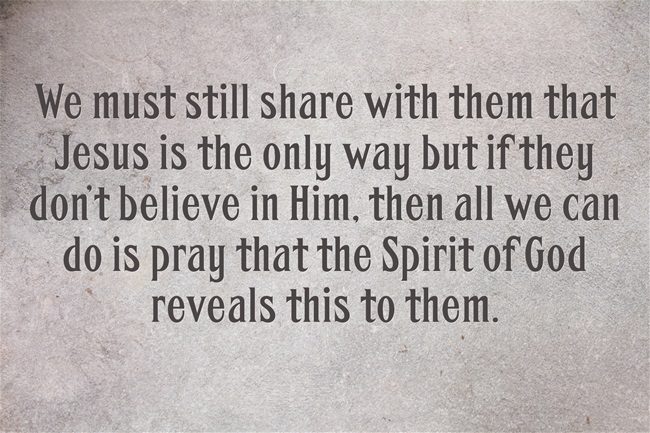 We can accept people for who they are and we must learn to tolerate other people’s beliefs.  This doesn’t mean that we agree with what they believe for we know there is only one way to be saved (Acts 16:30-31) but it does mean that we should love others despite their disagreements with us.  We must honestly admit, “And such were some of you” (2 Cor 6:11a) but thanks be to God “you were washed, you were sanctified, you were justified in the name of the Lord Jesus Christ and by the Spirit of our God” (2 Cor 6:11b, c).   We must still share with them that Jesus is the only way but if they don’t believe in Him, then all we can do is pray that the Spirit of God reveals this to them.  This doesn’t lesson our responsibility to proclaim the gospel but we should understand that it takes the Word of God, from a person of God, mixed with the Spirit of God, to make the children of God, and for the glory of God.

September 3, 2014 Should Christians Study Other Religions and Faiths?
Recent Comments
7 Comments | Leave a Comment
Browse Our Archives
get the latest from
Evangelical
Sign up for our newsletter
POPULAR AT PATHEOS Evangelical
1