Should Christians Study Other Religions and Faiths?

Is there value for the Christian to study other religions and faiths?  If so, what value is there or should we even be studying other beliefs.

Christians already know that they should study the Bible on a regular, hopefully daily basis as the Scripture says “Do your best to present yourself to God as one approved, a worker who has no need to be ashamed, rightly handling the word of truth” (2 Tim 2:15).  If I came up to you and had only three minutes to be saved and told you “I am dying…please, quickly tell me how I can be saved?” would you know how to tell me?  What Bible verses would you quote? Do you have any Scriptures memorized that you can give me?  What ones would they be?  What would you say?  Until we can easily share the gospel with someone, we may not know it well enough ourselves.  That is why we are commanded to study to show our selves approved to God so that we can “Always be prepared to give an answer to everyone who asks you to give the reason for the hope that you have” (1 Pet 3:15) but if we are not ready, then we better study and memorize key verses so that we can.  In this same way, I believe it is useful for us to study and know other religions and other faiths so that we can reveal to them the superiority of salvation that is found in Christ alone (Acts 4:12).

There is great value in studying other religions because it gives us the knowledge to know what they believe and to have a greater understanding of why they believe it.  If we don’t know what they believe in comparison to how a person can be saved, we won’t know how to contrast and compare any of the differences.  I once spoke with some Mormon’s and asked them some questions about their beliefs. I tried to show them from the Scriptures that what they believed was contrary to what the Bible teaches and that I believe what the Word of God says.  If I had no idea what they believed, then I would be ill-equipped to try and reason with them to show them why I believe, for example, in the divinity of Christ.  I quoted several key Bible verses that clearly indicate that Jesus is God and not, as they believe, a created being and the half-brother of Lucifer, later turned Satan.  I tried to reason with them that unless you have the right Jesus, the biblical Jesus, you don’t have the right Savior.  To have the right Savior is to know how to rightly be saved. For example, John 17:3 says “And this is eternal life, that they know you the only true God, and Jesus Christ whom you have sent.”  If I know someone that means that I know where they were born, what city they were born in, what they love to do, what they don’t like to eat, etc…but if I don’t really know them, then I can’t say that I do.  Here, Jesus says that “this is eternal life, that they know you…and Jesus Christ.”  When He says this “is” the word “is” is like an equal sign like 2 plus 2 is 4.  So Jesus says this is or is equal to eternal life; that they know the only true God” and more importantly, that they also know “Jesus Christ whom [God has] sent.” If you don’t know the right Jesus then you have a substitute.  If Jesus was a created being, then His sacrifice on the cross wasn’t sufficient because if He was only a created being dying for us and that is not enough to grant us eternal life.

Know what they Believe

When armies study the battle plans of the enemy, they want to know how the other general thinks and what his normal battle plans and tactics are.   The more you know about the way the enemy operates, the better you are able to defeat or counter them.  Now, I am not using this analogy to say that those who are of differing beliefs and faiths are our enemies.  What I am saying is that unless you know what they believe, you won’t know how they operate and where they are coming from and if you don’t know that, you go in with blinders on and are not going to be prepared when they start telling you why they believe what they do.  It’s easier to refute something as untrue if you know what it is that they believe.  This is also the reason that we must really know the Bible because if they counter with something unbiblical we need to know where the Bible says that what they are saying is not true.  This is one of many reasons that we need to hide God’s Word in our hearts so that we can just quote certain Bible verses to show them why we don’t believe this.  In these discussions, it’s not always expedient or convenient to pull out a Bible and say, “Wait, let me look something up.”  If you have to do that, it’s likely you’ll lose credibility because you don’t know what you believe well enough to quote it from memory.

The fact is that only a few Christians will ever actively share their faith and that’s too bad because we know that “faith comes by hearing and hearing by the Word of God” (Rom 10:17) and “How, then, can they call on the one they have not believed in? And how can they believe in the one of whom they have not heard? And how can they hear without someone preaching to them” (Rom 10:14)?  If you don’t tell them, who will?  You may be the only Bible that they ever hear.  There is no better reason to study other religions and other beliefs except to proclaim the way to salvation is only through Jesus Christ (Acts 4:12).  God has no plan B.  We are it!  I hate to say it but far too many Christians are like a frozen river; their mouth never opens to bring the living water that flows out of Jesus Christ the Savior.  If they never hear that they’ve been separated from God by their sins (Isaiah 59:1-2), they’ll never see any need for the blood of the Lamb’s sacrificial atonement. Will you be that vessel for Christ’s glory? 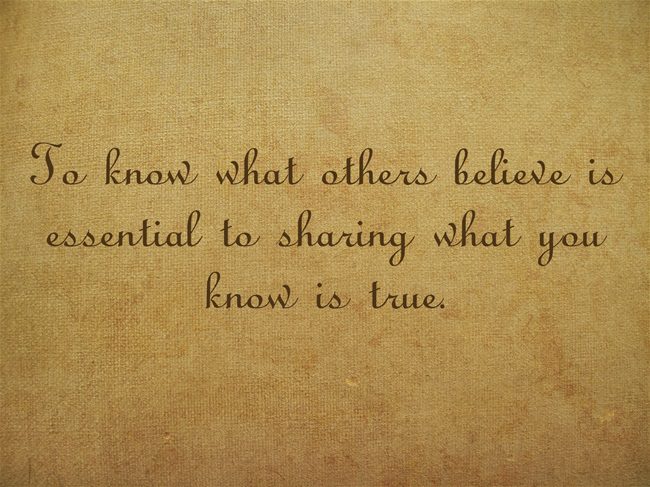 September 2, 2014
Should Christians Be Tolerant of Other Religions and Beliefs?
Next Post