Top 7 Bible Verses About Accepting Others

What does the Bible say about accepting others?  What can we learn from Scriptures regarding others who are believers and those who are not?

Colossians 3:13 “bearing with one another and, if one has a complaint against another, forgiving each other; as the Lord has forgiven you, so you also must forgive.”

Paul tells the church at Colossae to bear with one another and if a brother or sister has a complaint, they are to forgive others because “the Lord has forgiven you” and “so you must also forgive.”  If we are not forgiving, it resembles the Parable of the Unforgiving Servant who was forgiven a debt that he could never repay and then refused to forgive a smaller debt against another that could have been repaid in time (Matt 18:21-35).

Ephesians 4:2-3 “with all humility and gentleness, with patience, bearing with one another in love, eager to maintain the unity of the Spirit in the bond of peace.”

Believers show their humility, gentleness, and patience when they accept others people’s faults.  We bear with one another in love and should be “eager to maintain the unity of the Spirit in the bond of peace” because we now have peace with God (Rom 5:1) through Jesus’ sacrifice.   The opposite of humility is pride and if we refuse to forgive someone when God has forgiven us, this shows that we are not humble at all and there is a failure to understand that we have been forgiven exponentially more than we will ever forgive someone else.  God will resist us in our pride (James 4:6).  Part of accepting others is accepting their apology and then moving on.  By refusing to hold a grudge we prove that we’ve forgiven them.

Romans 14:1 “As for the one who is weak in faith, welcome him, but not to quarrel over opinions.”

If we argue over non-essentials, then we are not accepting differences in people’s preferences and in what they see as sin and what they see as not being sin.  Who are we to judge our brother over the non-essentials like food, drink, days of worship, or anything else where the Bible is silent?   Paul asks “Who are you to pass judgment on the servant of another? It is before his own master that he stands or falls. And he will be upheld, for the Lord is able to make him stand” (Rom 14:4). If we eat pork and observe Christmas while others don’t, then don’t “quarrel over opinions” because there is grace in the non-essentials.  A good rule to live by is:  Where the Bible is silent, so must we be. 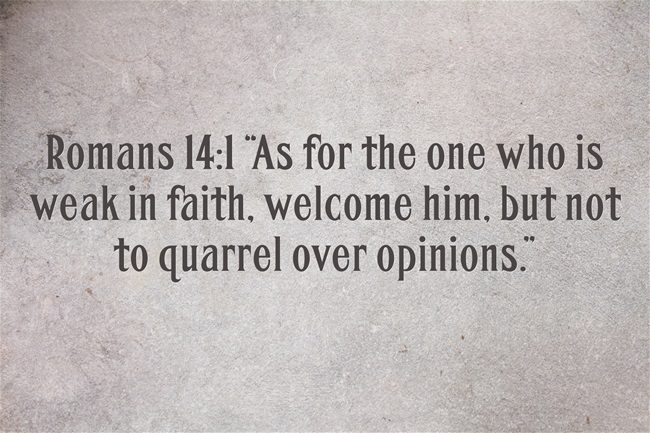 This tiny little verse is packed with meaning.  Throughout the entire Bible you see the theme that God is no respecter of persons.  In the Old Testament, He accepts the foreigner and gives them the same options for being joined to the nation Israel.  World history shows that cultures treated women like they were livestock or property, but Jesus valued women and treated them as co-heirs and co-equals and in God’s eyes, women and men are both equal before Him.  So too, believers should treat those who are poor, of a different nationality, or in any way are different from us with the same regard as God does.  He is no respecter of persons; therefore there is no partiality with God.

John 3:16 “For God so loved the world, that he gave his only Son, that whoever believes in him should not perish but have eternal life.”

This “whoever” may believe clearly shows that God offers salvation to anyone regardless of race, creed, nationality, or any other manmade category.  It is grace and not race.  Race is a manmade barrier to equality.  God offers salvation to anyone that repents and confesses their sins and then trusts in Christ.  When we share the gospel of Jesus Christ, we must accept people no matter what they look like because God’s desire is to save all that will come to Christ (1 Pet 3:9). I once went up to a biker with a leather jacket, tattoos, and earrings and shared the good news of the gospel.  I must admit that I thought that this man would never believe in the gospel but to my surprise, he was already saved.  Shame came over me because I tried to judge him as unworthy of being saved and that there was little possibility that he would come to saving faith.  I never forgot that and now look at each person as someone God wants to save, not as someone that I think might be or might not be saved.  Neither you nor I will ever see a person that God doesn’t want to save.  Besides, God is longsuffering with us (2 Peter 3:9b).

Romans 15:7 “Therefore welcome one another as Christ has welcomed you, for the glory of God.”

I heard a true story of a man who was obviously poor who had soiled and torn clothes that came into a church.  The man came forward at the invitation but when a deacon saw that the man had a pack of cigarettes in his pocket, the deacon came up to him and took the pack of cigarettes out of his pocket and crushed them and said, “Not in here!”  After the services ended, the pastor came up to the same man and gave him ten dollars so that he could buy another pack of cigarettes and apologized for what the deacon had done.  This pastor welcomed this man and the deacon should have also.  Thankfully the man was saved anyway, despite what the deacon had done.  When someone comes into our church, our home, or anywhere we might receive people; rich or poor or in any way different from us we should welcome them because they too were created in the image of God.  We should welcome all people just “as Christ has welcomes [us because this is] for the glory of God.”

Philippians 2:3-4 “Do nothing from selfish ambition or conceit, but in humility count others more significant than yourselves.  Let each of you look not only to his own interests, but also to the interests of others.”

The Book of Philippians has been called The Book of Joy because joy is mentioned in this book more than in any other book in the New Testament.  This was likely Paul’s favorite church and no wonder because they exuded fruits of the Holy Spirit.  Paul says here that we must esteem others, not equal to ourselves, but actually better than ourselves and we shouldn’t look only to our own interests but to the interests of others.  This means that we accept people for who they are and not who we think they are.  When we put others ahead of ourselves, we are not doing anything “from selfish ambition or conceit, but in humility” as we “count others more significant than” we do ourselves.

We must learn to accept the faults of others just as God has learned to accept our own faults. If I want to cast stones, I would be my first target because I have no right to judge anyone else but myself.  If God accepts us, then we must learn to accept others.  To fail to do so is sin before God because He is no respecter of persons and shows no partiality with men and women…if we do, we are setting ourselves us as their judge and that is God’s job, not ours.

September 9, 2014 Can a Christian Be Possessed By a Demon?
Recent Comments
2 Comments | Leave a Comment
"The Book of Mormon tells us Satan has a Church which would be impossible since ..."
Jesus Jehovah What Is The Bible Definition Of ..."
"I highly disagree with that."
Elexis Selmon Top 7 Bible Verses For Actors ..."
"You are right if everyone started following Bible then we have to sell our possession,wiki-criticism ..."
Zafar Sharif What Is The Biblical Definition of ..."
"Thank you Mr. Arthur. You bring up some valid points."
Jack Wellman How Joy Is A Source of ..."
Browse Our Archives
Follow Us!