What Does The Number Thirteen (13) Mean or Represent in the Bible?

Is there something symbolic or meaningful about the number 13?   If so, what is it?

Not an Unlucky Number

God is sovereign over all that happens and there are no accidents in the reign of God so 13 is not a lucky or unlucky number.  In fact, luck is like chance…it is nothing.  Some hotels and airlines have no 13th floor or 13th aisles in them because of superstition.  Friday the 13th also carries that stigma with it. When we attribute certain power or luck to a number we are revealing our ignorance of the supremacy of God in all things.  There is no magical power or special abilities to a number any more than there is power in chance.  If a weather forecaster predicts a 30% chance of rain, do we really believe that the chance had anything to do with whether it rains or not?  Did chance create the wind shear or increase the humidity?  Was chance the cause for the wind direction, the dew point or the drop in the barometric pressure?  Of course not.  We can’t attribute any power or special abilities to a number but the Bible does speak about certain negative things regarding the number thirteen but it doesn’t mean that the number created or caused the bad or evil things to occur, as we shall read;  it just seems to be associated with it, but it is intentional and no accident.

The Number 13 and Defilement

Jesus mentions 13 things that defile a person in Mark 7:20-23 saying

“What comes out of a person is what defiles him.  For from within, out of the heart of man, come evil thoughts, sexual immorality, theft, murder, adultery, coveting, wickedness, deceit, sensuality, envy, slander, pride, foolishness.  All these evil things come from within, and they defile a person.”

The number 13 wasn’t a defiling number but these things that Jesus listed are.  What is interesting is that most of these defilements or evil things come out of the heart and are what truly defiles the man.  Jesus was speaking about the traditions of the Pharisees when He told the disciples “There is nothing outside a person that by going into him can defile him, but the things that come out of a person are what defile him” (Mark 7:15) and that “whatever goes into a person from the outside cannot defile him, since it enters not his heart but his stomach, and is expelled” (Mark 7:18-19).  The number 13 had nothing to do with the evil but the human heart did.

Other Things Associated with 13 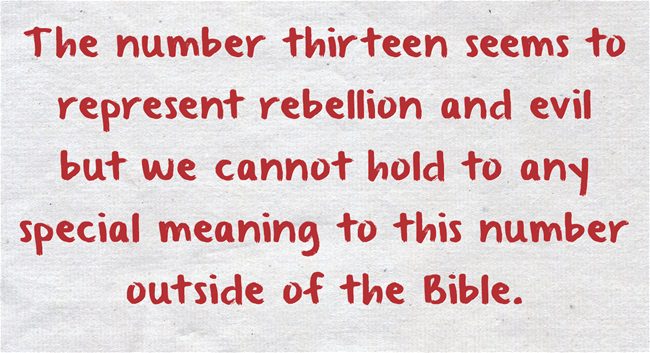 The number thirteen seems to represent rebellion and evil but we cannot hold to any special meaning to this number outside of the Bible.  It is just a number and nothing more.  In the sovereignty of God, there is nothing that is happen chance or by random, blind luck but with specific purpose.  God’s will cannot be thwarted and He is totally immutable.  What will be bad for you is if you have not been saved is that you will experience what Revelation 20:13 says “And the sea gave up the dead who were in it, Death and Hades gave up the dead who were in them, and they were judged, each one of them, according to what they had done.”  You will be judged for your sins or if you repent and trust in Christ, they have already been forgiven and you will be found innocent because your sins have been taken away in the Person of Christ by His substitutionary death on the cross.  Please, I beg you, take Paul’s advice in 2 Corinthians 6:2 “In a favorable time I listened to you, and in a day of salvation I have helped you.” Behold, now is the favorable time; behold, now is the day of salvation.”

September 30, 2014
Top 7 Bible Verses About Helping Others in Need
Next Post

October 2, 2014 What is Apologetics? What is an Apologist?
Recent Comments
3 Comments | Leave a Comment
Browse Our Archives
Related posts from Christian Crier