What Does the Number Forty (40) Mean or Represent in the Bible?

Numbers can often have meaning in the Bible so what does the number forty mean and what is normally associated with it?

Forty: the Number of Testing

The number forty usually has to do with testing in the Bible.  There are dozens of examples to show this and we will examine a few to see why this is so.  From Jesus to the children of Israel in the Wilderness, the number forty shows that testing and trials are sometimes associated with this number and so we read in the Scriptures that the number forty generally symbolized a period of testing, trial or probation.   As has been said, a faith that is not tested cannot be trusted.

Matthew 4:1-3a “Then Jesus was led up by the Spirit into the wilderness to be tempted by the devil.  And after fasting forty days and forty nights, he was hungry. And the tempter came and said to him.”

Jesus fasted for forty days and forty nights and it wasn’t until after He fasted that He faced the greatest temptation that anyone has ever experienced…and He passed this severe test.  Can you imagine fasting for forty days and nights?  What must that have felt like?  How famished and exhausted He must have been!  Fasting is a powerful tool to use when overcoming a major sin like an addiction (Isaiah 58) and by Jesus’ fasting for so many days He was able to resist the Devil and his three temptations in putting Jesus, Who is God, to the test.  Being hungry, how hard it must have been for Jesus to not turn stones into bread, yet Jesus defeated the Devil at his own game.

Joshua 5:6 “For the people of Israel walked forty years in the wilderness, until all the nation, the men of war who came out of Egypt, perished, because they did not obey the voice of the LORD; the LORD swore to them that he would not let them see the land that the LORD had sworn to their fathers to give to us, a land flowing with milk and honey.”

Israel, time and again showed discontent with what God had provided for them and so God allowed them to wander in the wilderness as a way of testing them “because they did not obey the voice of the Lord.”  They were not allowed to enter the Promised Land because of that.  Since they tested God, God then tested the house of Israel.  Even with their failure to obey God, He told them “The LORD your God has blessed you in all the work of your hands. He has watched over your journey through this vast wilderness. These forty years the LORD your God has been with you, and you have not lacked anything” (Duet 2:7).

Exodus 34:27-28 “And the Lord said to Moses, “Write these words, for in accordance with these words I have made a covenant with you and with Israel.” So he was there with the Lord forty days and forty nights. He neither ate bread nor drank water. And he wrote on the tablets the words of the covenant, the Ten Commandments.”

Moses was up on the mountain in the presence of God and while there, “he neither ate bread nor drank water.”  This seems to fit a pattern of seeking the presence of the Lord while fasting.  Many people fast when they are trying to overcome a major sin or when they are petitioning God because of a great trial in their life.  While God was chiseling out the Ten Commandments, the nation of Israel was already playing the harlot and worshiping an idol.

The Flood of Forty Days and Nights

Genesis 7:12 “And rain fell upon the earth forty days and forty nights.”

The flood symbolized God’s judgment on a sinful people and this trial by water lasted for forty days and forty nights, wiping out all those who refused to repent and turn to God at Noah’s preaching, even though Noah had preached to them for well over a century. 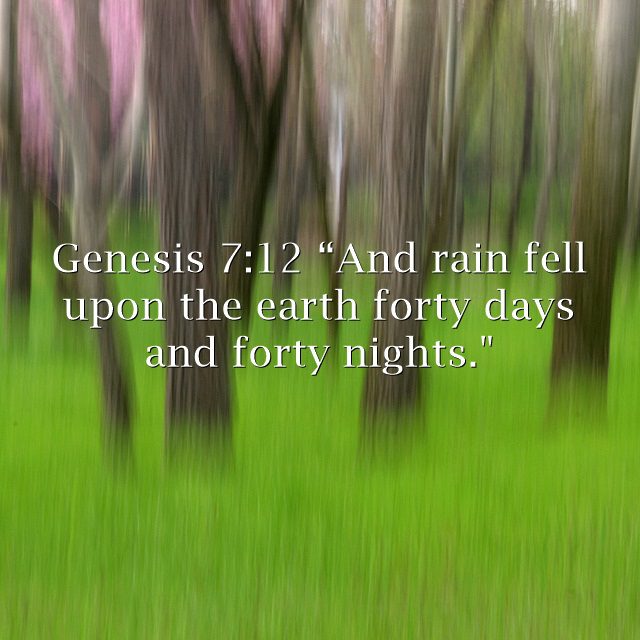 Other Significant Events and the number Forty

Today, God is still testing His saints but often this testing is seen as a punishment but as in the case of Job, this testing is not always for reproof or correction but to see if they will seek God and still praise Him even in the storms of life.  As I wrote earlier, a faith that is not tested cannot be trusted so if you are presently experiencing a trial or a test, don’t grow weary or faint and don’t give up because God may not necessarily be disciplining you but may be testing you to see how strong your faith and trust in Him really is.  I pray we can all pass the test and remain obedient to God and have our trust in Him remain unshaken.

October 2, 2014
Top 7 Bible Verses About Doubt or Doubting
Next Post