What Does The Number Ten (10) Mean or Represent in the Bible?

Is there meaning to the number 10 in the Bible? If so, what does this number mean or represent?

God gave us the 10 Commandments that were a reflection of His expectations of mankind and as a way to represent His holiness.  The first four are vertical (towards God) and the last six are horizontal (human relations).  Couldn’t there have been more than 10 Commandments?  Why not 15 or 20?  The fact is that the 10 Commandments, if kept, would be all that society would require to live in peace and harmony with both God and mankind.  The number 10 seems to reflect God’s authority or God’s governmental rule over the affairs of mankind.  This is seen elsewhere as in the 10 elders that were placed in most of the city gates of Israel (Ruth 4:2) so the number 10 also seems to represents man’s responsibility of obedience to God’s law.  Such a number seems to indicate the law, responsibility and a completeness of order in both divine and human structures of society.   Some scholars see 10 as the number of divine perfection.

The 10 Toes and Horns of Daniel and Revelation

As 10 represented God’s governmental rule, so does the number 10 represent the rule of mankind but also the Evil One behind man’s government as we see in the 10 toes of Daniel 2 and in Revelation chapter’s 13 and 17 of the beast with the 10 horns.   Throughout the Bible horns are representative of strength and great power.  In Revelation 2:10 Jesus tells the church as Smyrna, “Do not be afraid of the things you are about to suffer. Look! The Devil will keep on throwing some of you into prison that you may be fully put to the test, and that you may have tribulation ten days.”   The beast has 10 toes and 10 diadems (Rev 13:1) and the beast’s 10 horns represented 10 kings (Rev 17:12).

The phrase “God said” appears 10 times in the creation week of Genesis 1.  I don’t believe in coincidences so the fact that “God said” is mentioned 10 times may be His way of saying that there is completeness in all of God’s creation and in all that God says.   I find it interesting that humans, who were created in the image of God (Gen 1:27), have 10 fingers and ten toes.

When God punished Egypt for not letting Israel God, there were 10 plagues which are reflective of the completeness of God’s judgment.  These plagues were also related, by no accident, to the false God’s that the Egyptians worshiped so the fact is not lost that God used Egypt’s own false gods against them to prove that God is the One, True God and there is no other.  This was intended to prove to both Egypt and Israel who the real God was and that the other gods were, in actuality, no gods at all.

The Passover lamb was to be sacrificed on the 10th day of the first month (Ex 12:3) which was symbolic of the true Passover Lamb, Jesus Christ which John the Baptist noticed when He saw Christ and said “Behold, the Lamb of God, who takes away the sin of the world” (John 1:29b).  Since Jesus was the atonement provided for sinners, the Day of Atonement was on the 10th day of the 7th month.

There were exactly 10 generations that lived up to the flood of Noah’s day when the flood of God’s judgment on sinful mankind overwhelmed all those who refused to repent.   Noah was the 10th patriarch and after this generation, God’s judgment fell on mankind because “The Lord saw that the wickedness of man was great in the earth, and that every intention of the thoughts of his heart was only evil continually.  And the Lord regretted that he had made man on the earth, and it grieved him to his heart.  So the Lord said, “I will blot out man whom I have created from the face of the land, man and animals and creeping things and birds of the heavens, for I am sorry that I have made them.”  But Noah found favor in the eyes of the Lord” (Gen 6:5-8).  Abraham, the father of the faithful, was the 10th generation from Shem, the son of Noah (Gen 11:10-26). 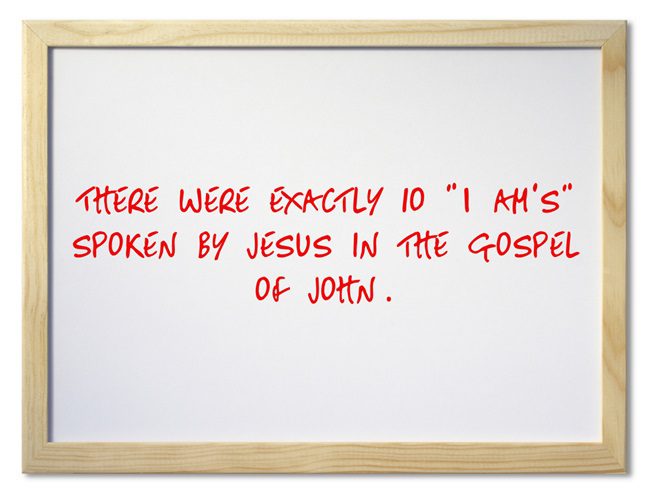 The tithe which is 10% of what Israel gained was holy unto the Lord.  This tithe was compulsory and was said to belong to the Lord, therefore it was holy.  Today, we are not under the Old Covenant, but many still believe in tithing while some are not able to give that much but those who have been blessed are able to give more than a 10th.

I hope that this helps give us a better understanding about what the number 10 often represents in the Bible, however the most important thing that you should understand is that if you have never repented, confessed your sins, and put your trust in Christ, you will face worse than the 10 plagues of Egypt.  At least they ended but for those who have never been born of God, they will have the endless wrath of God abiding on them for all eternity (John 3:18, 36b) with all hope gone forever.  I pray that is not your case.  If you haven’t yet been saved, today is your day (2 Cor 6:2) because tomorrow may be too late (Rev 20:11-15).

October 4, 2014 What Language Did Jesus Speak? Was it Aramaic or Hebrew?
Recent Comments
10 Comments | Leave a Comment
Browse Our Archives
Related posts from Christian Crier