Wide is the Gate; Broad is the Path to Destruction: A Bible Study on Matthew 7

Wide is the Gate; Broad is the Path to Destruction: A Bible Study on Matthew 7 October 14, 2014 Jack Wellman

Some of Jesus’ teachings are very hard but they are equally important.  Why did Jesus say the gate is wide and the path is broad that leads to destruction?

I believe that Satan has his own preachers in many of the churches today.  Why else would Jesus tell us to “Beware of false prophets, who come to you in sheep’s clothing but inwardly are ravenous wolves” (Matt 7:15)?  They were “sheep’s clothing” because they are supposed to be shepherds and may even look like the sheep they are tending but inwardly, they “are ravenous wolves.”  Why ravenous?  Because they want to devour the flock and lead them astray and without teaching them about repentance and faith, will ultimately allow them to enter into utter destruction.  Billy Graham once said that there are many false converts in American churches today.  Some believe they are saved and they are not.  They prayed a prayer, they walked the aisle, they filled out a decision card but that is not how someone is saved. That only gives people false assurance and even with the sincerity of their decision there is no transformed life.  They could be sincere but sincerely wrong!  This has created thousands of false converts and today the tares and the wheat sit right next to each other in church and no one is warning them of the coming wrath of God!

No pastor can tell whether a person is truly saved or not but anyone can inspect the fruit.  Jesus said in Matthew 7: 16-20 “You will recognize them by their fruits. Are grapes gathered from thornbushes, or figs from thistles?  So, every healthy tree bears good fruit, but the diseased tree bears bad fruit.  A healthy tree cannot bear bad fruit, nor can a diseased tree bear good fruit.  Every tree that does not bear good fruit is cut down and thrown into the fire.  Thus you will recognize them by their fruits.”

If I said to you that I saw a fig tree but all it had were thorns or thistles on it then you probably tell me “That’s ridiculous.  You sure no a farmer!  Fig trees don’t have thorns.”  Or what if I told you that “I saw a thorn bush that had figs growing on it” you probably tell me that I had to have my head examined and you’d be right.  That’s why Jesus used this example.  Everyone knows that thornbushes don’t produce figs and fig trees don’t have thorns or thistles.  Neither do sick trees produce good fruit; they usually produce no fruit.  Jesus is telling us that someone who claims to be saved or to be a Christian should be producing good fruit.  No fruit is evidence of no conversion as Jesus said “you will recognize them by their fruits.”

There is a contradiction when someone says they believe in Jesus but they watch what the world watches, they listen to what the world listens to and they talk like the world talks.  If someone watches R-rated movies full of filthy language, sexual immorality and physical violence without any conviction, something is dreadfully wrong. If someone listens to worldly music with lyrics about sexual immorality, drugs and the pride of life there is a contradiction to their profession of seeking first the kingdom of God and His righteousness (Matt 6:33).  If someone talks and grumbles about their working conditions, their boss, gossips, and uses foul language, profanity and curse words then how can a healthy tree be said to be bearing good fruit?  This is why many who are atheists and agnostics say “Well if that’s Christianity, then I don’t want any of it.  They’re no different from the rest of the world.”

This is what the Apostle John wrote about, “They are from the world; therefore they speak from the world, and the world listens to them” (1 John 4:5).  They say “I love God,” [but] hates his brother, he is a liar; for he who does not love his brother whom he has seen cannot love God whom he has not seen” (1 John 4:20) because “whoever loves God must also love his brother” (1 John 4:21) otherwise “he is a liar.”  I didn’t say this…God’s Word does.  God’s Word commands believers; “Do not love the world or the things in the world. If anyone loves the world, the love of the Father is not in him.  For all that is in the world—the desires of the flesh and the desires of the eyes and pride of life—is not from the Father but is from the world.  And the world is passing away along with its desires, but whoever does the will of God abides forever” (1 John 1:15-17).  If you claim or believe you are a Christian, take this challenge; take a note pad and make two columns and log how much time you spend doing something during a weekday.  Write down how much time you spend watching TV.  How much time do you spend listening to worldly music?  How much time do you spend on the Internet?  Now, on the other side write down how much time you spend in the Bible.  Log the time you spend in prayer?  Log how much time you spend with other believers?  Is one more lopsided than the other?  Does it reflect walking with Christ? Does it reflect being a disciple of Christ?  Does it show you are seeking first the kingdom of God or the kingdom of man?  This is not about legalism.  It is about examining ourselves to see if we are in the faith (2 Cor 13:5) which believers are commanded to do. Many spend more time on Facebook than having their face in “the book” (the Bible).

The Broad Gate and Wide Path 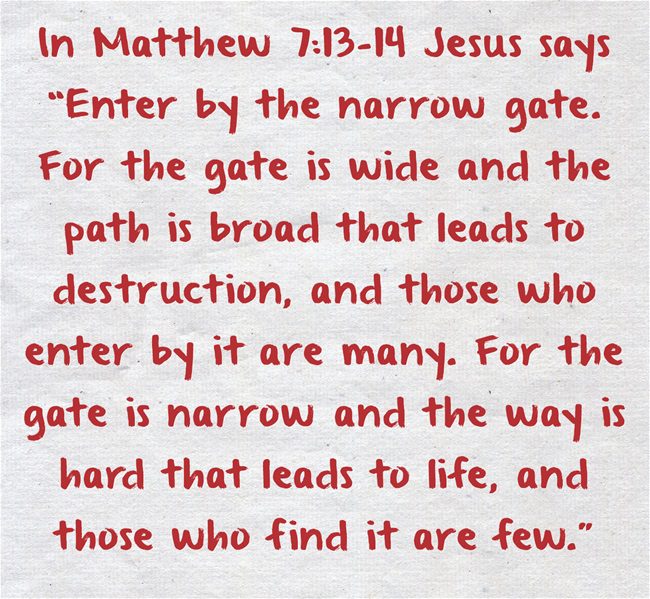 Jesus:  I Never Knew You

In Matthew 7:21-23 Jesus gives a very serious warning that “Not everyone who says to me, ‘Lord, Lord,’ will enter the kingdom of heaven, but the one who does the will of my Father who is in heaven.  On that day many will say to me, ‘Lord, Lord, did we not prophesy in your name, and cast out demons in your name, and do many mighty works in your name?’  And then will I declare to them, ‘I never knew you; depart from me, you workers of lawlessness.”  In Jewish literature, when a person’s name is mentioned twice, it is indicative of them thinking that they have an intimate relationship like when God says “Saul, Saul, Moses, Moses, Abraham, Abraham…” so many on that day of His judging the world will say “Lord, Lord” but not everyone who says that “will enter the kingdom of heaven.”  That will be the most dreadful of all things that any person could ever hear.  They thought that they were saved. They professed Christ.  They believed that they were Christ’s and they will even claim to do things for Him and “do many might works in [His] name” but what does Jesus say?  He doesn’t say, well I didn’t know you that well.  I didn’t really know you very good.  No, He will say “I never knew you.”  It’s not that you say “I know Jesus Christ” but ask yourself, does He know me!?    Just like the wide gate and broad path, “many will say to” Christ “Lord, Lord” but the many will be in for the most horrific words that they will ever hear; “depart from me, you workers of lawlessness.”

Why did I write this?  It was to warn many who believe that they are saved but aren’t.  Remember. “There is a way which seems right to a man, but in the end it leads to death (Prov 14:21; 16:25) and in their heart they feel that they are saved but “The heart is deceitful above all things, and desperately wicked: who can know it” (Jer 17:9).   I don’t care if this offends because the greatest act of love is to risk being hated so that someone might examine themselves and ensure that they are truly saved or discover, before Christ returns, that they are not saved and give them time to repent and trust in Christ.  The Word of God comforts the afflicted but it afflicts the comfortable.  Nothing is more important than your eternal destiny and to examine yourself to be sure you are in the faith because no one wants to hear, “I never knew you; depart from me, you workers of lawlessness.”    By then, it will be too late.  Many are going this way but I pray you are not.