Here are 7 of my personal favorite verses about passion.  What ones might you include?

The word passion originates from the Latin word “passio” which is closely related to the Greek root “path” meaning “to suffer.”  When this word is applied to the mind, it can relate to the mind being controlled by emotion which we will see in later verses.  This is not just a weak emotion but a very powerful one.   Passion can be good and bad, sinful and righteous and can certainly be overwhelming and override rationality.  When Paul wrote that God gave them up to their (sinful) passions (Rom 1:26) the Greek word “pathos” was used and can mean several things; “an affliction of the mind, emotions,” and “a feeling which the mind suffers” so the word passion can swing in many different areas but almost always is extremely intense.

Acts 1:3 “He presented himself alive to them after his suffering by many proofs, appearing to them during forty days and speaking about the kingdom of God.”

The “He” in this sentence is Jesus Who presented Himself alive after His scourging (highly torturous) crucifixion, death, and resurrection.  Jesus’ last week and consequent illegal trial, torture and crucifixion is known as the Passion Week.  The word in this verse “suffering” is closely related to passion and is from the Greek “paschō” and means “to be affected,” or “to have been affected” and His suffering was unlike any man that has ever lived.  In fact the word excruciating originated from the word crucifixion.

Romans 1:26-27 “For this reason God gave them up to dishonorable passions. For their women exchanged natural relations for those that are contrary to nature; and the men likewise gave up natural relations with women and were consumed with passion for one another, men committing shameless acts with men and receiving in themselves the due penalty for their error.”

When Paul wrote this, the word passion was from the Greek verb “pathos” and here in this context it apparently means “a feeling which the mind suffers” which is one of the primary meanings but there doesn’t seem to be any suffering here so a secondary use of this word “a passionate deed” seems to fit the context since the Greeks used pathos in either a good or in a bad sense but here Paul clearly means in a sinful sense.

First Corinthians 7:9 “But if they cannot exercise self-control, they should marry. For it is better to marry than to burn with passion.”

Some translations are incorrect and simply end the sentence with “For it is better to marry than to burn” which has led many to believe that they will burn in hell for sexual immorality but in this chapter it seems out of that context.  He is basically saying that if someone can’t control their sexual drive, they are better off marrying than burning with passion and committing sexual immorality.  That’s why Paul wrote to the Thessalonians “that each of you should learn to control your own body in a way that is holy and honorable” (1 Thess 4:4)

Galatians 5:24 “And those who belong to Christ Jesus have crucified the flesh with its passions and desires.”

Paul shows that there is hope for the believer because if we belong to Christ, we “have crucified the flesh” along “with its passions and desires” but every Christian I know will tell you that it isn’t easy.  It is a daily struggle that even the spiritual giant Paul wrestled with.  He writes about this battle with the flesh in Romans chapter 7.

Suiting their own Passions

Second Timothy 4:3-4 ” For the time is coming when people will not endure sound teaching, but having itching ears they will accumulate for themselves teachers to suit their own passions, and will turn away from listening to the truth and wander off into myths.”

This last letter of Paul is heartbreaking in a way because everyone but the Lord had abandoned him.  He predicted that a time would come when people would no longer endure sound teaching and that time came very quickly and is thriving today.  Why do they want to accumulate teachers to themselves?  It is to suit their own passions.  In other words, they want teachers who won’t call their sinful lifestyle what it is.sin and these teachers will compromise the truth of God’s Word and turning from the truth they will wander “off into myths” and away from sound, biblical teaching.

Spending it on their Passions

James 4:3 “You ask and do not receive, because you ask wrongly, to spend it on your passions.” 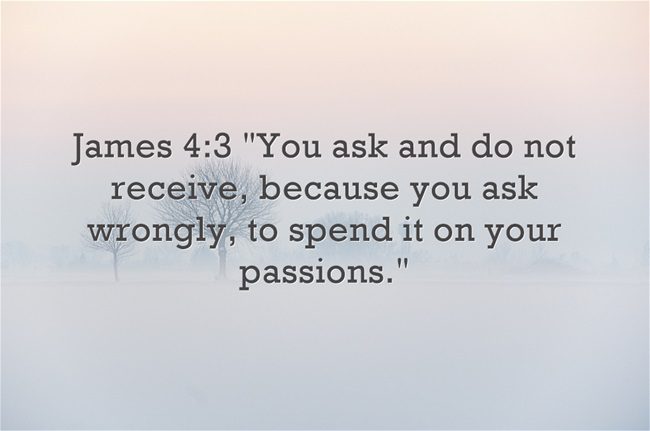 The Passing of the Passions

There was a time when I had these former passions sensuality, drunkenness, and all sorts of lawless idolatry but when I was born again, I left this lifestyle behind because I no longer had the overwhelming desires to do these things.  The Spirit of God convicted me that these things were sinful and so when I left these things, my old friends were surprised that I did “not join them in the same flood of debauchery” and so yes, they did malign me but my mind was renewed by God.

Jesus Passion Week showed that He set His mind on suffering, dying, and being raised to life again so that we might receive eternal life if we repent and trust in Him.  Today, my passions have changed and one of the greatest passions I now have is based upon compassion. The Spirit of God normally changes our passions from being evil into good.  The word compassion is a compound word of “with” (com) “passion” (strong emotional feelings).  Not the sinful passions of my previous days but as Jude wrote I now desire to “have mercy on those who doubt;  save others by snatching them out of the fire; to others show mercy with fear, hating even the garment stained by the flesh” (Jude 1:22-23).  This new passion has to do with my great, deep desire like a fire burning within me to help rescue the perishing or as Jeremiah puts it “there is in my heart as it were a burning fire shut up in my bones, and I am weary with holding it in, and I cannot” (Jer 20:9).

January 16, 2015
Top 7 Bible Verses About Reading The Bible
Next Post

Weddings as the End vs. Weddings as the...
Traditionally, says Michael Warren Davis, weddings were seen as a beginning, the...
view all Evangelical blogs
What Are Your Thoughts?leave a comment
Copyright 2008-2021, Patheos. All rights reserved.