Much Sleep, Much Poverty

Proverbs 6:9-11 “How long will you lie there, O sluggard? When will you arise from your sleep?   A little sleep, a little slumber, a little folding of the hands to rest, and poverty will come upon you like a robber, and want like an armed man.”

Look at the image of someone sleeping in every day (the folding of the hands) while others are off to work.  By slumbering, they are not arising from sleep, they are resting instead of going out to work.  The result is like an armed robber coming to take what little they have and bring it to nothing.  In other words, it takes him or her by surprise.  They are reaping poverty for having sown no seeds of work.  It is the simple cause and effect.

Laziness can lead to Poverty

Proverbs 10:4 “A slack hand causes poverty, but the hand of the diligent makes rich.”

Certainly not all poverty is caused by a “slack hand” or a lazy person but many times it is.  The diligent who makes riches doesn’t mean that they are wealthy but their lack of poverty comes as a result of earning it the old fashion way…by working hard or as this proverb insinuates, by the hand.  A slack hand is one that slacks off at work and may lose their job due to that or they might slack off in even looking for work but ultimately, the slack handed one causes their own poverty.  They have no one but themselves to blame.  They reap what they have sown, even if it’s a sowing of slackness.

The sluggard is the same thing as a lazy person.  Solomon wants the sluggard to consider the ant.  Look at how diligently the ant works and works and prepares for the cold season.  It is “Without having any chief, officer, or ruler, she prepares her bread in summer and gathers her food in harvest” so the sluggard shouldn’t have to wait for someone to tell them to work hard to provide bread in times when they’ll need it.

Laziness to the Extreme

Proverbs 26:15 “The sluggard buries his hand in the dish; it wears him out to bring it back to his mouth.”

Can you believe it?  The sluggard’s hand is worn out even in feeding himself (“to bring it back to his mouth”) because even that is too much like work.  The sluggard may not have to worry about that too long because the longer he lives the life of a sluggard, the less and less he will have something to put into the dish.  In fact, in a similar proverb, the “sluggard buries his hand in the dish; he will not even [so much as] bring it back to his mouth” (Prov 19:24)!  How lazy can he get?  Not much, I would say. 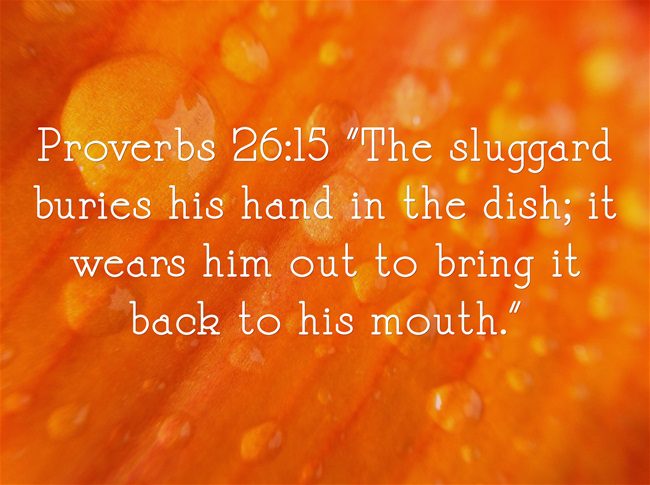 Second Thessalonians 3:6 “Now we command you, brothers, in the name of our Lord Jesus Christ, that you keep away from any brother who is walking in idleness and not in accord with the tradition that you received from us.”

Here Paul commands believers to avoid anyone “who is walking in idleness and not in accord with the tradition that you received from us.”  In other words, those who walk in idleness were apparently siphoning off of others who do work.  This was not “in accord with the tradition that [they] received from” Paul.  Paul later wrote “If anyone is not willing to work, let him not eat” (2 Thess 3:10). These are the people we should avoid. There are so many “get rich” schemes out there that so many get entangled in because they simply don’t want to work hard like most people do.  Paul commanded believers to “do their work quietly and to earn their own living” and not support the idle ones (2 Thess 3:12b).

Matthew 25:26 “But his master answered him, ‘You wicked and slothful servant! You knew that I reap where I have not sown and gather where I scattered no seed?”

Here Jesus was giving the Parable of the Talents, where some were given talents and they worked and invested these talents, using them for the kingdom but one of the slothful or lazy servants hid it in the ground (buried it) so that he not only didn’t use it, he didn’t want others to see that he actually had a talent.  What does the Master say to this slothful servant?  It is a fearful warning to all who profess faith in Christ but are not possessing saving faith.  Jesus rebukes this worthless, lazy servant by saying “take the talent from him and give it to him who has the ten talents” (Matt 25:28) because at least the one who earned (worked hard) with the ten talents given him shows he can be trusted but to the worthless servant who was lazy, Jesus says to “cast the worthless servant into the outer darkness. In that place there will be weeping and gnashing of teeth” (Matt 25:30).  That is the judgment for all who refuse to use what they’ve been given by God and perhaps a warning to those who are not serving the Master and Lord (Jesus Christ) at all and are not actually believers (Matt 7:21-23).

The Diligent Rule the Slothful

Proverbs 12:24 “The hand of the diligent will rule, while the slothful will be put to forced labor.”

We can see the principle of working hard as a command from God and it is in the best interests of the one who works diligently.  Jesus believed in hard work.  Prior to the beginning of His earthly ministry, He was a carpenter and carpenters in those days didn’t just mean woodwork but working with large timbers and stones and all of it was manual labor and of course without the aid of any power tools so everything was done by hand.  Jesus said “My Father is always working, and so am I” (John 5:17) and so must we be.  We must all work so that we won’t be in hunger and we can work to help those who cannot work for themselves for various reasons.  The Bible has much to say about laziness…and none of it is good.

January 31, 2015 Top 7 Bible Verses About Anointing
Recent Comments
0 | Leave a Comment
"Jack, I was reading the comments here, and I realize the post is over a ..."
rtgmath Why the Poor Are Important To ..."
"A very complete discussion of the word "woe", and one that we carefully avoid, because ..."
David Stockwell What Does Woe Mean? A Biblical ..."
"Helpful article especially that just showing up to become available for service.The article fleshes out ..."
the old scribe 4 Characteristics of a Good and ..."
"This article is a prime example of why I will never become an Evangelical. Everything, ..."
Viator16 4 Characteristics of a Good and ..."
Browse Our Archives
Follow Us!