Does The Bible Have Hate Speech?

Does The Bible Have Hate Speech? February 6, 2015 Jack Wellman

There are laws in Canada that make it a crime to preach against certain things that exist in their society and these laws may soon be coming to the U.S but is there really hate speech in the Bible?  Can we say that with authority?  We know that God hates sin and it is said that God hates divorce but it never says that God hates divorced people.  Psalm 7:11 says that “God judges the righteous, and God is angry with the wicked every day” but the Hebrew doesn’t actually call it “hate” but the Hebrew word “za`am” means “to denounce, express indignation,” or “to be indignant” and it is the wicked because of their sin that God denounces and expresses His indignation against.  For those who have repented and put their trust in God, His anger against sin was satisfied by Jesus Christ at the cross.  Christ “was pierced for our transgressions; he was crushed for our iniquities” and “upon him was the chastisement that brought us peace” (Isaiah 53:5) which is what Paul wrote “since we have been justified by faith, we have peace with God through our Lord Jesus Christ” (Rom 5:1) so now there is “no condemnation for those who are in Christ Jesus” (Rom 8:1).  God hates sin because sin was very costly…costing Jesus His life and the price for our sins was placed upon Jesus at Calvary in unimaginable torment and suffering that went on for hours.  God loves the Son but He also loves those who have repented and trusted in Him too so Jesus took the wrath of God so that we wouldn’t have to bear it ourselves in hell and it was “For our sake he made him to be sin who knew no sin, so that in him we might become the righteousness of God” (2 Cor 5:21).

Does God Hate Sin but Love the Sinner?

If we look at the Bible verses that contain the word sin + hate we can see that it is not always directly pointed toward the person but what the person does.  I hated it when my son or daughter disobeyed me but I never hated them…so in my love I disciplined them.  If I didn’t love them, I would do nothing…that would be apathy.  Regarding the sin and not as much the sinner, God has much to say about it and it’s not good; “There are six things that the Lord hates, seven that are an abomination to him” (Prov 6:16).  The psalmist added “you are not a God who delights in wickedness; evil may not dwell with you” (Psalm 5:4).  For the most part, the world is separated from God by their sins (Isaiah 59:2) and if we love the world, then the love of the Father is not in us because whoever has “friendship with the world is at enmity (or hostility) with God? Therefore whoever wishes to be a friend of the world makes himself an enemy of God” (James 4:4).  That’s why those “who love the Lord, hate evil [and] He preserves the lives of his saints” (Psalm 97:10).

If you knew someone who was blind and they were walking toward the edge of a cliff, it would be hateful to not warn them. You could be held legally liable for not warning them.  Just as if you saw a child drowning in a swimming pool and did nothing to save them would be criminally negligent, so it is to not warn people that if they step out of this life without Christ, they face an eternal punishment from which there is no escape.  It is not hateful to warn them of an impending judgment that is coming, on the contrary, it is the most loving thing you can ever do…even if it comes at the expense of their hating you.  It is really the message that they hate and not the messenger.  The message from Jesus’ own lips says “whoever does not believe is condemned already, because he has not believed in the name of the only Son of God” (John 3:18b).  Everyone loves John 3:16 but it means nothing without John 3:18. 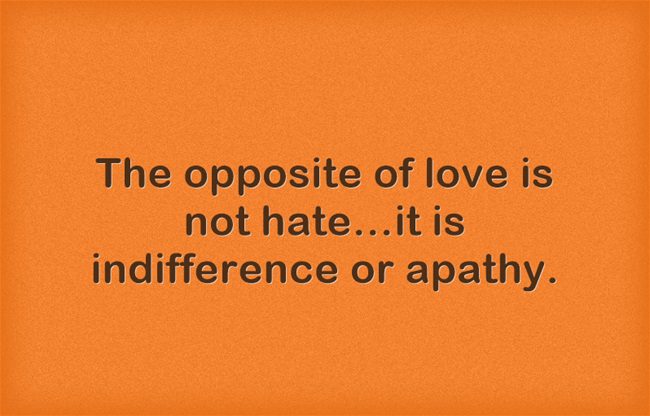 The opposite of love is not hate…it is indifference or apathy.  Do we care that people are dying every day without Christ and will suffer in hell for their sins?  Do we not care enough to point them to the One and only way that they can be saved (Acts 4:12)?  I believe if we don’t share the bad news of people’s sins separating them from a Holy God (Isaiah 59:1-2) and that “whoever does not obey the Son shall not see life, but the wrath of God remains on him” (John 3:36b) the “good news” of salvation in Jesus Christ alone will mean nothing.  It’s actually a cruel thing to not tell others that they will stand before God and be judged someday apart from Christ (Rev 20:12-15) and that no works will ever be good enough to save them (Eph 2:8-9).  They must repent of (turn away, forsake) their sins and then put their trust in Jesus Christ.  Show them love by telling them the truth; that God is angry at the sinner every day (Psalm 7:11).  Tell them how they can be saved from God’s wrath and after they die and at the judgment (Heb 9:27) they will be saved.  And tell them to their face that it is in their “hard and impenitent heart [that they] are storing up wrath for [themselves] on the day of wrath when God’s righteous judgment will be revealed” (Rom 2:5) so they need to repent, believe, and be saved (John 3:16).

The 2021 SBC and the Cost...
Anxious Bench
Related posts from Christian Crier