Christians know and believe that we are engaged in a daily battle between good and evil. Satan, the great deceiver, and his minions, are always trying to destroy humanity by any means necessary. They will lie, kill and destroy anyone they can, especially if it will keep us from a strong relationship with the Father. This is called spiritual warfare, and my top 7 Bible verses about spiritual warfare are as follows:

2 Corinthians 10:4 “For the weapons of our warfare are not of the flesh but have divine power to destroy strongholds.”

Adam and Eve experienced the first human “battle” with Satan in the garden, and because of their fall, he has continued to try to destroy mankind ever since. Even though we have been in a cosmic war ever since the beginning of time, God has provided us with what we need to defeat our enemy. This verse is important, because it explains that our weapons of warfare are not the normal ones, rather they have divine power to destroy anything that Satan throws against us.

Ephesians 1:3 “Blessed be the God and Father of our Lord Jesus Christ, who has blessed us in Christ with every spiritual blessing in the heavenly places…”

God, the Father, is always fighting for us, and it is he that blesses us continually. He knows that we are waging a war, so he provides us with the spiritual weapons and blessings we need in the heavenly places. He has not left us alone or abandoned us in this spiritual battle.

Ephesians 3:10 “…so that through the church the manifold wisdom of God might now be made known to the rulers and authorities in the heavenly places.”

The church is the bride of Christ, and as such the Lord has granted us his manifold wisdom. This discernment has been given to us to help us stand firm against Satan’s wiles. Being a part of the church, I believe will help us wage an effective spiritual war against our greatest enemy.

Ephesians 6:11 “Put on the whole armor of God, that you may be able to stand against the schemes of the devil.” 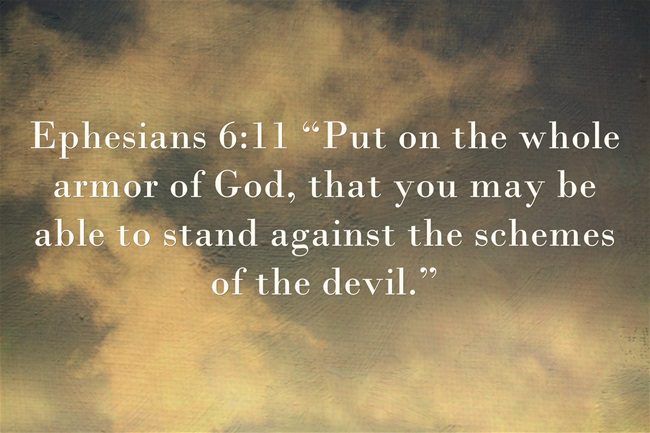 God loves us so much, and in this verse he is warning us about our greatest enemy—the devil. He points out that we are indeed in a battle, and so we must clothe ourselves with the appropriate armor. If we do, then we will be able to stand against the enemies schemes.

This is my top verse for describing what spiritual warfare is all about. The apostle Paul explains that we are not wrestling against flesh or blood, but we are actually fighting against powers and forces of evil in the heavenly places. So our fight is not necessarily against other human beings, but rather we need to fight Satan and those rulers and authorities of darkness that seek to destroy us. The best part of this whole passage in the book of Ephesians is that God even gives us the individual pieces of armor that we need to put on to confidently and safely fight the battle as well.

I think that it is hard for some to believe that there are other dimensions and kingdoms that are unseen around us. But if we are to wage war against our enemy, we have to acknowledge that he is real. This verse confirms that God created all things in heaven and on earth, the visible and the invisible, the rulers and the authorities. Since we are in a spiritual battle against the forces of evil, we definitely need God fighting on our side.

Colossians 2:15 “He disarmed the rulers and authorities and put them to open shame, by triumphing over them in him.”

God gives us the weapons of our warfare—the helmet of salvation, the breastplate of righteousness, the belt of truth, the shoes of the Gospel of peace, the sword of the Spirit, and the shield of faith. These weapons are not the traditional ones used in war, but they are even more effective in defeating our enemy. This verse confirms that it is through God that our foes are disarmed and put to shame, and that we can triumph over them.

I Timothy 1:18 “This charge I entrust to you, Timothy, my child, in accordance with the prophecies previously made about you, that by them you may wage the good warfare…”

Paul and Timothy had a wonderful mentoring relationship, and in this passage the apostle Paul is encouraging young Timothy to stand firm in the spiritual battle that he is facing. He reminds him about the encouraging prophecies he had received earlier and that God was using to equip him to wage the good warfare. So all he needed to realize was that the battle belongs to the Lord.

Fighting a spiritual battle can seem daunting to us as Christians, but the Lord wants to encourage us in every way possible. He gives us the weapons that we need to win the war, as well as the reminder that he is ultimately in control of all things. All of this can be summed up in this verse found in Deuteronomy 20:1, that states, “When you go out to war against your enemies, and see horses and chariots and an army larger than your own, you shall not be afraid of them, for the Lord your God is with you, who brought you up out of the land of Egypt.” God loves and cares for us so much, so he encourages us to approach any spiritual warfare unafraid and with a victorious attitude.

God has been good to me over the years, and I have much for which to be grateful to Him. First of all, I feel blessed to be the pastor’s wife of a thriving church in northern Michigan and the mother of four amazing grown children. It is also very rewarding to be a Christian author, editor and

April 26, 2015
Faith, Reason, And Science Are Not Incompatible
Next Post

Christians, COVID-19, and the Dangerous Idol...
The Chorus In The Chaos
Related posts from Christian Crier

On Misreading Winning and the Mandate of Heaven...
Times look bad  and the temptation is to extrapolate from who is...

Gospel for Asia Provides Someone Who Cares
WILLS POINT, TX – Gospel for Asia (GFA World) founded by Dr....
view all Evangelical blogs
What Are Your Thoughts?leave a comment
Copyright 2008-2020, Patheos. All rights reserved.