Here are the top 7 Bible verses about deceit and why it’s important to be on guard against it.

Proverbs 26:24-26 “Whoever hates disguises himself with his lips and harbors deceit in his heart; when he speaks graciously, believe him not, for there are seven abominations in his heart; though his hatred be covered with deception, his wickedness will be exposed in the assembly.”

There is one thing that you can say about people who are deceived. They don’t know that they’re deceived and if you try and tell them that they are, they can’t believe it because they don’t know it, otherwise they wouldn’t be deceived in the first place. To be deceived means to be misled by a false appearance or statement of someone and to be deluded into believing in something that is not true. Essentially, it causes a belief in something which is not true. If we don’t seek the truth we are seeking to be deceived.

Colossians 2:8 “See to it that no one takes you captive by philosophy and empty deceit, according to human tradition, according to the elemental spirits of the world, and not according to Christ.”

This reminds of Satan’s tactics. He seeks to take people captive by empty philosophies and empty deceit and it can be according to human tradition which is Satan-inspired. This is certainly not according to Christ because Jesus is the truth (John 14:6) and no deceit was ever found in His mouth (1st Pet 2:22).

First Peter 2:1 “So put away all malice and all deceit and hypocrisy and envy and all slander.”

The Christian can apparently be deceived too because Peter speaks about putting away all malice and all deceit and the way to put deceit away is to “long for the pure spiritual milk, that by it you may grow up into salvation” (1st Pet 2:2) and of course, that “spiritual milk” is found in the Word of God. 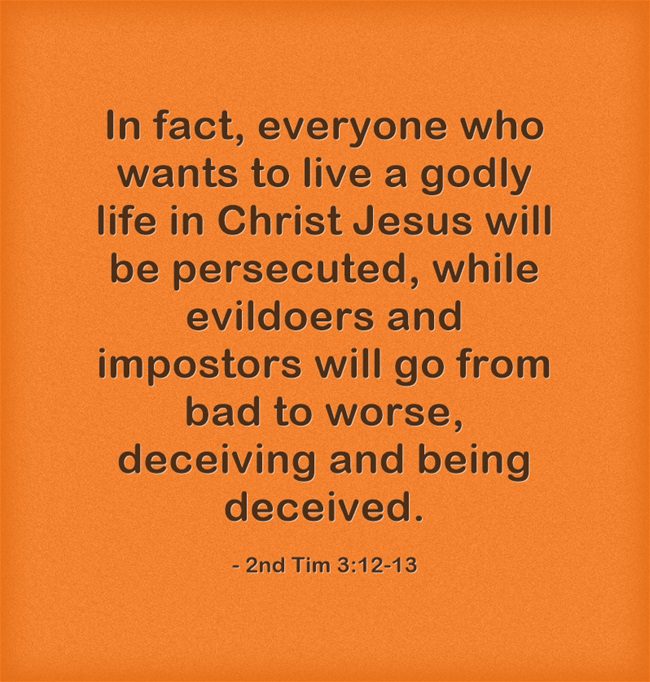 Proverbs 20:17 “Bread gained by deceit is sweet to a man, but afterward his mouth will be full of gravel.”

It’s good to work and labor for that is our lot under the sun (Eccl 5:18; 9:9) and the bread earned by hard work is sweet to the taste but for those who earn their bread by deceit, the proverb says, it will be like “his mouth will be full of gravel.” We can swallow a lie so easily but the truth is sometimes hard to swallow.

Revelation 12:9 “And the great dragon was thrown down, that ancient serpent, who is called the devil and Satan, the deceiver of the whole world—he was thrown down to the earth, and his angels were thrown down with him.”

Here is clear evidence that Satan is the deceiver of all deceivers. He has in fact deceived the whole world, meaning those who haven’t heard the truth and been set free by it (John 8:32). The truth sets you free or it makes you really mad but hearing the truth of God exposes deceit and stops it dead in its tracks.

Romans 1:28-30 “And since they did not see fit to acknowledge God, God gave them up to a debased mind to do what ought not to be done. They were filled with all manner of unrighteousness, evil, covetousness, malice. They are full of envy, murder, strife, deceit, maliciousness. They are gossips, slanderers, haters of God, insolent, haughty, boastful, inventors of evil, disobedient to parents.”

What an indictment of all unbelievers. They don’t acknowledge God and so then God says, “Okay, you don’t want to believe, that’s fine, believe a lie and deceive yourselves.” That’s why the author of Hebrews warns those who haven’t yet believed to “not harden your hearts” (Heb 3:8) and again, “Today, if you hear his voice, do not harden your hearts” (Heb 3:16). The longer you hear “his” voice, that is God’s voice by His Spirit telling you to repent and trust in Christ, the more your hearts can become hardened and the more often you reject Christ, the harder your heart becomes and then your heart will become too hard to ever believe, so today is a good day to put your trust in Christ (2 Cor 6:2).

Second Timothy 3:12-13 “In fact, everyone who wants to live a godly life in Christ Jesus will be persecuted, while evildoers and impostors will go from bad to worse, deceiving and being deceived.”

Here we read that those who do evil and are impostors of the truth will grow from bad to worse. They will be deceiving others to the point that they themselves will become deceived. In other words, they will tell so many lies that even they’ll start to believe them. The deception, like the evil, grows from bad to worse and only a strong dose of the truth can free a person from their deception and it takes a new birth (John 3:3, 7) because just as Jesus said, “flesh and blood has not revealed this to you, but my Father who is in heaven” (Matt 16:17).

If you are seeking to worship the One, true God, Jesus said that “a time is coming and has now come when the true worshipers will worship the Father in the Spirit and in truth, for they are the kind of worshipers the Father seeks. God is spirit, and those who worship him must worship in spirit and truth” (John 4:23-24) and I strongly urge you to “Seek the LORD while he may be found” (Isaiah 55:6).