Who Were The Moabites In The Bible?

Who were the Moabites? Why were they natural enemies of God and of Israel?

The Origins of the Moabites

Lot’s firstborn child, which came through Lot’s own daughter, her firstborn, was called Moab and “He is the father of the Moabites to this day” (Gen 19:37) and Lot’s younger daughter “also bore a son and called his name Ben-ammi. He is the father of the Ammonites to this day” (Gen 19:38). This was not Lot’s doing as his daughters, knowing that Lot had no wife, said “let us make our father drink wine, and we will lie with him, that we may preserve offspring from our father.” So they made their father drink wine that night. And the firstborn went in and lay with her father. He did not know when she lay down or when she arose” (Gen 19:32-33). They had the best of intentions, but good intentions don’t guarantee something is right and it certainly wasn’t right in this case.

Lot had no idea what had happened. Just because of this occurrence, we cannot make the stretch that says God condones incest because the laws clearly forbid this and it’s a sin that brought a sentence of death in the Old Testament laws. Everything that happens is not the will of God, therefore when something like this happens, it is totally inaccurate to say that God approves of such things. The argument that since something happens in the Bible means that God condones it is totally without merit. That’s like saying a bank is robbed and the police and the bank both allow it, thus they condone it. 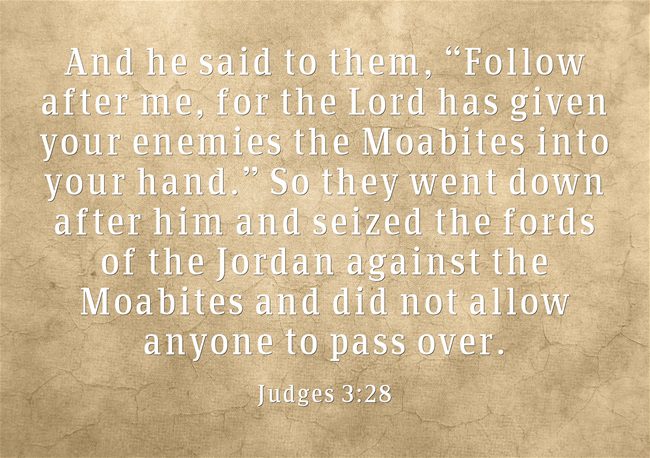 Moab, Father of the Moabites

Nations grow out of a single family and in time, Moab’s family grew into a large, powerful, and yet evil nation called the Moabites. During the time of the judges, there was no king because after the death of Joshua, Israel really had no single ruler so Israel was ruled by a series of judges which originated in the time of Moses when he established judges to rule and adjudicate matters and settle disputes among the Israelites. After Israel had fallen into idolatry and her enemies began to severely oppress her, the people cried out to God and God “the Lord raised up for them a deliverer, Ehud, the son of Gera, the Benjaminite, a left-handed man. The people of Israel sent tribute by him to Eglon the king of Moab” (Judges 3:15).

Then Ehud “presented the tribute to Eglon king of Moab. Now Eglon was a very fat man. And when Ehud had finished presenting the tribute, he sent away the people who carried the tribute” (Judges 3:17-18) “And Ehud said, “I have a message from God for you.” And he arose from his seat. And Ehud reached with his left hand, took the sword from his right thigh, and thrust it into his belly” (Judges 3:20b-21). After this, Ehud said “Follow after me, for the Lord has given your enemies the Moabites into your hand.” So they went down after him and seized the fords of the Jordan against the Moabites and did not allow anyone to pass over. And they killed at that time about 10,000 of the Moabites, all strong, able-bodied men; not a man escaped. So Moab was subdued that day under the hand of Israel. And the land had rest for eighty years” (Judges 3:28-30).

When David began to take control of the lands around Judea, “David defeated the Philistines and subdued them, and he took Gath and its villages out of the hand of the Philistines” (1st Chron 18:1) and then “he defeated Moab, and the Moabites became servants to David and brought tribute” (1st Chron 18:2) and from that day forward, the Moabites were never really a serious threat to Israel of themselves. They did have one last attempt at defeating Israel but they needed the help of other nations. It was under King Jehoshaphat that “the Moabites and Ammonites, and with them some of the Meunites, came against Jehoshaphat for battle. Some men came and told Jehoshaphat, “A great multitude is coming against you from Edom, from beyond the sea; and, behold, they are in Hazazon-tamar” (that is, Engedi). Then Jehoshaphat was afraid and set his face to seek the Lord, and proclaimed a fast throughout all Judah. And Judah assembled to seek help from the Lord; from all the cities of Judah they came to seek the Lord” (2nd Chron 20:1-5).

King Jehoshaphat and Israel knew that they were in trouble so they besought the Lord’s help, and interestingly, “when they began to sing and praise, the Lord set an ambush against the men of Ammon, Moab, and Mount Seir, who had come against Judah, so that they were routed. For the men of Ammon and Moab rose against the inhabitants of Mount Seir, devoting them to destruction, and when they had made an end of the inhabitants of Seir, they all helped to destroy one another” (2nd Chron 20:22-23). When they came out to see what had happened “they looked toward the horde, and behold, there were dead bodies lying on the ground; none had escaped” (2nd Chron 20:24) and that would be the very last time that the Moabites would be a serious threat to Israel, not to mention any other nation. Basically, the Moabites were no more and they have disappeared from off the face of the earth and are without a trace as any people or nation today.

The Moabites were natural enemies and they had such a despicable religious practice that stooped so low as to offer child sacrifices, so God, in His righteous indignation against such an abominations, ensured the end of this nation for if they were allowed to continue to exist, countless numbers of babies and infants would have been sacrificed in the fires to their false pagan god.

Jack Wellman is Pastor of the Mulvane Brethren church in Mulvane Kansas and is also the Senior Writer at What Christians Want To Know whose mission is to equip, encourage, and energize Christians and to address questions about the believer’s daily walk with God and the Bible. You can follow Jack on Google Plus or check out his book Blind Chance or Intelligent Design available on Amazon.

July 21, 2015
Who Was Nehemiah In The Bible? A Christian Study
Next Post