What Does Idolatry Mean? A Biblical Definition of Idolatry

What Does Idolatry Mean? A Biblical Definition of Idolatry August 17, 2015 Jack Wellman

Have you read in the Bible about idolatry? What does idolatry mean and what is the biblical definition of idolatry?

I love one definition of idolatry as that which occurs when you look down at the fruit of your own labor, the statue that you carved yourself, and you worship it. It can also be described as a blind or excessive devotion to something that is not really god or a god but is something created by their own hands, as in a carved or chiseled image or one created in their own minds and a god of their own imagination. Idolatry is anything that is placed before or above the One, True God. Martin Luther is right; our hearts are idol factories, mine included.

Idolatry in the Old Testament

Isaiah wrote of the worthlessness of idols, writing “All who fashion idols are nothing, and the things they delight in do not profit. Their witnesses neither see nor know, that they may be put to shame” (Isaiah 44:9) and God spoke through Ezekiel too that idolaters “shall bear the penalty for your sinful idolatry, and you shall know that I am the Lord God” (Ezk 23:49). God warned Israel just before they were to cross over into the Promised Land; “Therefore watch yourselves very carefully. Since you saw no form on the day that the Lord spoke to you at Horeb out of the midst of the fire, beware lest you act corruptly by making a carved image for yourselves, in the form of any figure, the likeness of male or female” (Duet 4:15-16) because this would take their eyes off of the One, True God for “When the Lord your God cuts off before you the nations whom you go in to dispossess, and you dispossess them and dwell in their land, take care that you be not ensnared to follow them, after they have been destroyed before you, and that you do not inquire about their gods, saying, ‘How did these nations serve their gods?—that I also may do the same’” (Duet 12:29-30). 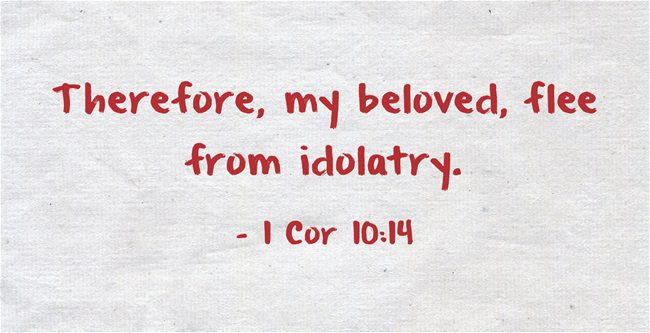 The Mighty Have Fallen

King Saul was dedicated to the Lord God for much of his early reign of Israel but later he began to make unwise decisions and turned his heart away from God and by doing so, he was rejected as king as Samuel tells Saul, “For rebellion is as the sin of divination, and presumption is as iniquity and idolatry. Because you have rejected the word of the Lord, he has also rejected you from being king” (1st Sam 15:23). This also was the cause of the fall of Israel “because the people of Israel had sinned against the Lord their God, who had brought them up out of the land of Egypt from under the hand of Pharaoh king of Egypt, and had feared other gods and walked in the customs of the nations whom the Lord drove out before the people of Israel, and in the customs that the kings of Israel had practiced” (2nd Kings 17:7-8) since “They built for themselves high places in all their towns, from watchtower to fortified city” (2nd Kings 17:9b). The “high places” were used to worship false gods or idols. God does not take this lightly at all, as you can tell from the history of Israel.

Idolatry in the New Testament

Idolatry is not just an Old Testament issue. It was alive and well during the early church in the first century but it is still alive today. Then, as now, we put things ahead of God Who deserves first place in our lives. Paul warned the church at Corinth, a city full of idols, “Therefore, my beloved, flee from idolatry” (1st Cor 10:14). Some of the sins of the flesh include idolatry as well as “sorcery, enmity, strife, jealousy, fits of anger, rivalries, dissensions, divisions” (Gal 5:22) so we must “Put to death therefore what is earthly in you: sexual immorality, impurity, passion, evil desire, and covetousness, which is idolatry” (Col 3:5). Here Paul defines what idolatry is; it is sexual immorality, impurity, covetousness, passion, and evil desires. These are idols because they are deemed more important than God in a person’s life and self-gratification is the god of their lives (which is idolatry). Believers used to bear fruits of the flesh but Peter admonishes us that “in the time that is past suffices for doing what the Gentiles want to do, living in sensuality, passions, drunkenness, orgies, drinking parties, and lawless idolatry” (1st Pet 4:3).

Paul was faced with idolatry in almost every city he entered but warned them “that everyone who is sexually immoral or impure, or who is covetous (that is, an idolater), has no inheritance in the kingdom of Christ and God” (Eph 5:5). Here again Paul reveals what idolatry is; sexually immorality and covetousness seem to be the main symptoms of an idolatrous heart and those who do such things clearly have no inheritance in the kingdom of God and so he tells the church at Corinth “Do not be deceived: neither the sexually immoral, nor idolaters, nor adulterers, nor men who practice homosexuality” (1st Cor 6:9). Before the Corinthians were saved Paul wrote that “You know that when you were pagans you were led astray to mute idols” (1st Cor 12:2) but believers now are to put God above all things and people.

Today I still battle the idols created in my own heart; that of satisfying the self, of feeding my fleshly cravings, and putting my own interests and will above that of God. That is truly idolatry of the heart. Many create a god of their own minds and say “God will never condemn anyone because God is a God of love.” I tell them that they’re right…that their God wouldn’t ever condemn anyone over sin because that God doesn’t exist. Jesus says that we all must repent and believe the gospel (Mark 1:15) and that no one can enter the kingdom unless he has the imputed righteousness of Christ. I pray you already have that righteousness but how is this possible? It was “For our sake he made him to be sin who knew no sin, so that in him we might become the righteousness of God” (2nd Cor 5:21).

August 17, 2015
What Does Intercession Mean? A Biblical Definition of Intercession
Next Post

Do "Rights" Limit or Empower the...
Cranach
Related posts from Christian Crier