What does the word intercession mean when used in the Bible? What is the biblical definition of intercession?

Intercession is basically the act of interceding between two or more parties. This could include prayers, petitions, or an entreaty requesting the favor of someone. I remember from my youth when two of my friends were about to get into a fight I tried to intercede on behalf of one of my friends who was being falsely accused by someone else and my other friend was angry at this false accusation. I interceded on behalf of my one friend and told my other friend that this was a false rumor and it was not worth getting into a fight over. To make intercession is like trying to make peace between two or more parties where there is a natural hostility or dispute. That is my definition of intercession but the biblical definition is what we’ll study next.

When Judah was living in great sin, God told Jeremiah “do not pray for this people, or lift up a cry or prayer for them, and do not intercede with me, for I will not hear you” (Jer 7:16) because God was going to discipline the nation and send them into captivity for their own good. That is, God wanted them to be taken captive by Babylon so that they would repent and see their sin and turn again to God. When Eli’s sons were sinning and were derelict in their priestly duties, he said “If someone sins against a man, God will mediate for him, but if someone sins against the Lord, who can intercede for him?” But they would not listen to the voice of their father, for it was the will of the Lord to put them to death” (1st Sam 2:25). Since they didn’t listen to their father’s words, the Lord ended up taking their lives for they took their duties lightly and God is too holy to be trifled with (1st Sam 2:34). 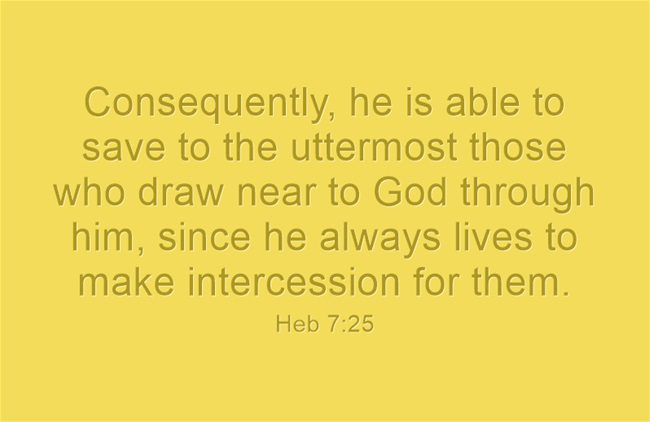 Sometimes when I am praying, I may not even know how to put it into words but the Spirit does and He helps me as Paul writes in Romans 8:26 “Likewise the Spirit helps us in our weakness. For we do not know what to pray for as we ought, but the Spirit himself intercedes for us with groanings too deep for words” and so the Holy Spirit Who “searches hearts knows what is the mind of the Spirit, because the Spirit intercedes for the saints according to the will of God” (Rom 8:27).

Jeremiah wrote “If they are prophets, and if the word of the Lord is with them, then let them intercede with the Lord of hosts, that the vessels that are left in the house of the Lord, in the house of the king of Judah, and in Jerusalem may not go to Babylon” (Jer 27:18) so there was hope for those left in Judah after the captivity of most of the nation but only if the prophets interceded on their behalf.  Here the word intercession means to pray in behalf of others and in this case prayer an intercessory prayer for the remnant of Judah that was left behind by the Babylonians who took most of the nation of Judah captive, yet left a remnant still in Jerusalem.

Paul requested “that supplications, prayers, intercessions, and thanksgivings be made for all people” (1st Tim 2:1) but there is another Who intercedes on our behalf before the Father on our behalf and it is Jesus Christ, and “Consequently, he is able to save to the uttermost those who draw near to God through him, since he always lives to make intercession for them” (Heb 7:25). This Man, Who was also God, was prophesied about long ago by Isaiah who wrote “Therefore I will divide him a portion with the many, and he shall divide the spoil with the strong, because he poured out his soul to death and was numbered with the transgressors; yet he bore the sin of many, and makes intercession for the transgressors” (Isaiah 53:12). If not for Jesus standing between us and a holy God, we would have no hope of reconciliation for our sins had separated us from His Holiness (Isaiah 59:2).

Jesus atoning death at Calvary bridged the gap that only the cross of Christ could reach (Acts 4:12). If not for His death, we would still have the wrath of God abiding on us (John 3:36b) and have nothing but a hopeless, Christ-less eternity ahead of us (Rev 20:12-15). Put your trust in Him and He will intercede on behalf of you and all who repent and believe in Him (John 3:16).

August 17, 2015
What Does Hyssop Mean? A Biblical Definition of Hyssop
Next Post