What Does Works Mean When Used In The Bible

What does the Bible mean by works when used in the Bible? Why are works important?

Not Saved by Works

I believe that Jesus + works = nothing, but Jesus + nothing = eternal life. This is made clear in Ephesians 2:8-9 which says “For by grace you have been saved through faith. And this is not your own doing; it is the gift of God, not a result of works, so that no one may boast.” We cannot be our own co-redeemers in any way. And that’s good news! We would never be satisfied if we had ever done enough to be saved. We are freely saved by grace; it is grace though faith. It is not anything we do, but does this mean “we do nothing?”

Here’s a new equation; grace + works = nothing…but, grace with works reveal a saving faith. I am not saying that grace + works save us. I am saying that grace through faith naturally produces (good) works, which God foreordained for us to do as Paul writes in Ephesians 2:10, “For we are his workmanship, created in Christ Jesus for good works, which God prepared beforehand, that we should walk in them.” We were created in Christ for good works and so if you’re not walking in them, then somethings wrong. God’s not wrong. He prepared good works for us before there was even an “us” (Eph 1)! Since these works were planned for us from before the creation; planned for us to walk in, and if we’re not walking in them, maybe it’s time for us to examine ourselves to see if we really are in the faith. You certainly don’t want to fail “the test of genuine faith” (2nd Cor 13:5). Paul wrote, “Let a person examine himself, then, and so eat of the bread and drink of the cup” (1st Cor 11:28) and he gives us very good reasons to make sure we do examine ourselves and the risks of not doing so (1st Cor 11:29-30). 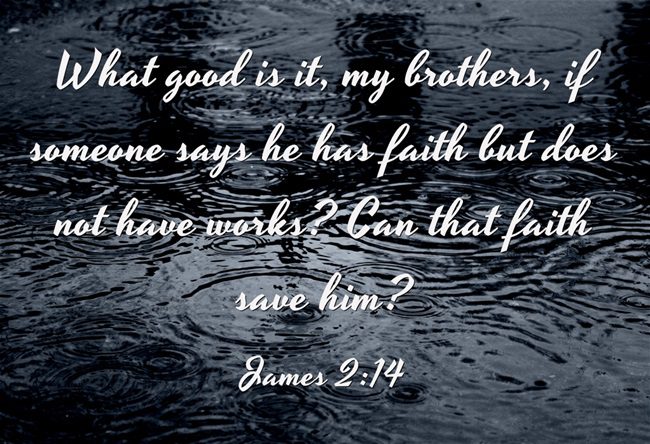 Martin Luther didn’t really want the Book of James in the Bible because he thought it emphasized the need for works to much. He believed it focused on works adding to or completing our salvation but upon a closer examination, James is not off the mark at all in what he wrote about faith and the necessity for works that come as a result of that faith. In James 2:14 he writes “What good is it, my brothers, if someone says he has faith but does not have works? Can that faith save him?” And “faith by itself, if it does not have works, is dead” (James 2:17) because the person isn’t walking in these “good works” (Eph 2:10) and that faith; that kind of faith, is not a saving faith at all. But then “someone will say, “You have faith and I have works.” Show me your faith apart from your works, and I will show you my faith by my works” (James 2:18). James almost seems to be taunting false converts who profess Christ but don’t possess Christ and have no works at all. James is asking them to prove to him that their faith is genuine if it has no works, and then, James will show you his faith; a faith that’s not by itself, but by the works that he does. Paul writes to Timothy “So also good works are conspicuous, and even those that are not cannot remain hidden” (1st Tim 5:25) so works are conspicuous and out in the open for all to see. Their works are not to be saved; their works are because they are saved.

When Jesus was standing on the shore of the sea of Capernaum, some came up to Him and said, “What must we do, to be doing the works of God?” Jesus answered them, “This is the work of God, that you believe in him whom he has sent” (John 6:28-29). They asked the wrong question and it was what works “must we do” but the only work was to believe in Jesus. They apparently felt burdened about the works they felt they had to do (must we do) and maybe they wanted to know the minimum amount needed. And instead of feeling like it is a “must do” it should be a “want to.” Jesus focused in on believing in Him and He wanted them to look away from what they must do (works). All major religions in the world are; do, do, do, but with Christ, it’s done. Incidentally, Jesus didn’t say that there wouldn’t be works.

Before a campfire goes out, someone usually stirs it up and adds some firewood to it. That’ll get it going again. In this same way, we should all “consider how to stir up one another to love and good works” (Heb 10:24). This isn’t saying that we push someone into a “good works” ministry of ours or another and neither is this intended to make them feel so guilty that they “must do” good works. If their heart is not in it, try to encourage them. First, stir them up in love; perhaps the works will follow.

I hope you can now understand how works come as a result of having a saving faith but they do not lead us into a saving faith. Faith without any works is a dead-on-arrival faith. A faith that is genuine will at least produce some good works. Thankfully, it doesn’t take works to save us, otherwise how would we ever know “how much is enough?”