What Does Jehovah Mean? A Biblical Study On The Word Jehovah

To many people’s surprise, the word Jehovah does not appear in the Bible anywhere at all. It is not found in the Old Testament, where many assume it would be, but neither does it appear in the New Testament either. The origin of the word “Jehovah” is a mystery to most Bible scholars. For one thing, the Hebrew language does not have any vowels. They pronounced vowel-like sounds in their words but they were never in written form. Some translators concocted the name of Jehovah from YWHW which is spelled Yahweh (pronounced “YAH way”) but the ancient Israelites were so afraid of mispronouncing God’s name that they never used this form of His name. We really don’t know how YWHW was pronounced at all.

There is no universal agreement about how to pronounce God’s name YWHW. Some write it out “Yehowah” or “Yahuweh” but this is only an estimate of how it might sound since YWHW is a tetragrammaton and there is far too much uncertainty to be sure about how to pronounce YWHW. The Jews, in fear of misusing God’s name, preferred the names “Elohim” or “Adonai.” The spelling of “Jehovah” entered the English language through William Tyndale’s translation of the Bible completed in 1537 but Tyndale transliterated the tetragrammaton into the English language by using the Masoretic vowel markings as those used in the Renaissance so this shows that there is very likely error in Jehovah being God’s literal name. For one thing, God has many names and His many names have to do with His attributes or characteristics such as Elohim, Adonai, EL-ELYON, El OLAM, EL-ROI, EL-SHADDAI, and dozens more attached to the names of God but even the word “Yahweh” in the original Hebrew is “YWHW” and we can only guess about how this was pronounced. 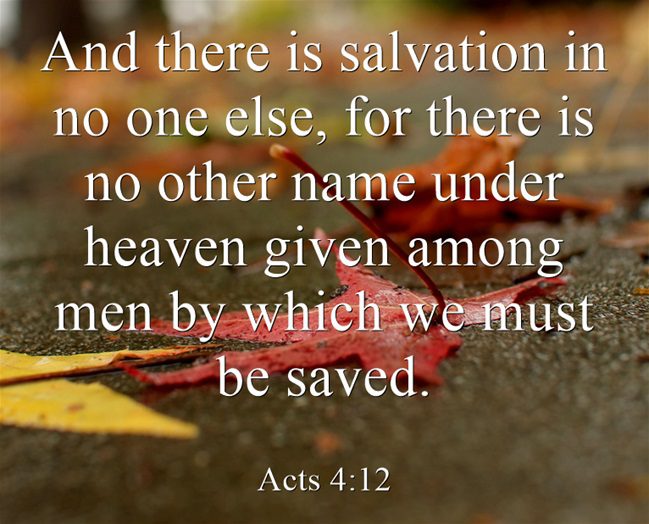 Even though there are many names for God there is but one name that believers know about whereby they can be saved and it is mentioned in Acts 4:12 (among many other places),”And there is salvation in no one else, for there is no other name under heaven given among men by which we must be saved.” Even though this name is pronounced Yah SHOE Ah, which is from the Old Testament Hebrew name Joshua, we know it as Jesus and whoever believes in Jesus Christ can be saved (Rom 10:9-13). Jesus’ name means, like Joshua’s, “God saves” or “God is salvation” or simply “salvation” which is essentially the same thing. When Mary was told earlier that she was to give birth to Jesus, an angel proclaimed to Joseph, “She will bear a son, and you shall call his name Jesus, for he will save his people from their sins” (Matt 1:21). The Jehovah Witnesses’ false believe that not using Jehovah as God’s name at all times is likened to idolatry even though there is zero evidence that this name is in the original manuscripts.

The Son of God is Jesus Christ and that is the most vital name to know about how to be saved. Paul wrote “if you confess with your mouth that Jesus is Lord and believe in your heart that God raised him from the dead, you will be saved. For with the heart one believes and is justified, and with the mouth one confesses and is saved. For the Scripture says that “Everyone who believes in him will not be put to shame” (Rom 10:9-11) because Jesus is “the same Lord is Lord of all, bestowing his riches on all who call on him. For “everyone who calls on the name of the Lord will be saved” (Rom 10:12-13). That’s all we need to know about God concerning how we might be saved because as the jailer asked Paul and Silas, “Sirs, what must I do to be saved?” And they said, “Believe in the Lord Jesus, and you will be saved, you and your household” (Acts 16:30-31).

August 19, 2015
What Does Works Mean When Used In The Bible
Next Post