What Does Lament Mean? A Biblical Definition of Lament Or Lamenting

What Does Lament Mean? A Biblical Definition of Lament Or Lamenting August 20, 2015 Jack Wellman

Whoever is lamenting is expressing great sorrow or regret and even grief about something or someone as in the loss of a life. This lamenting could be verbally expressed in wailing, weeping, and crying. To lament means that something horrific has likely happened in their life and it moves the person deep within their soul and it is outwardly expressed in such a way that it is demonstrative and can’t be overseen by others. You can see examples of lamenting at funerals.

This world is headed for certain disaster. Today it seems that all we are doing is rearranging chairs on the deck of the Titanic but someday as Amos writes, God “will turn your feasts into mourning and all your songs into lamentation; I will bring sackcloth on every waist and baldness on every head; I will make it like the mourning for an only son and the end of it like a bitter day” (Amos 8:10). Isaiah, in writing about the coming judgment on Judah wrote that “her gates shall lament and mourn; empty, she shall sit on the ground” (Isaiah 3:26). Even as far away as Egypt, “The fishermen will mourn and lament, all who cast a hook in the Nile; and they will languish who spread nets on the water” (Isaiah 19:8). And to Jeremiah God says regarding the coming judgment on Judah, “put on sackcloth, lament and wail, for the fierce anger of the Lord has not turned back from us” (Jer 4:8) and “I will take up weeping and wailing for the mountains, and a lamentation for the pastures of the wilderness, because they are laid waste so that no one passes through, and the lowing of cattle is not heard; both the birds of the air and the beasts have fled and are gone” (Jer 9:10). The entire Book of Lamentations, written by Jeremiah, is based upon God’s righteous indignation and judgment and the laments of Jeremiah who is sometimes called “the weeping prophet.” 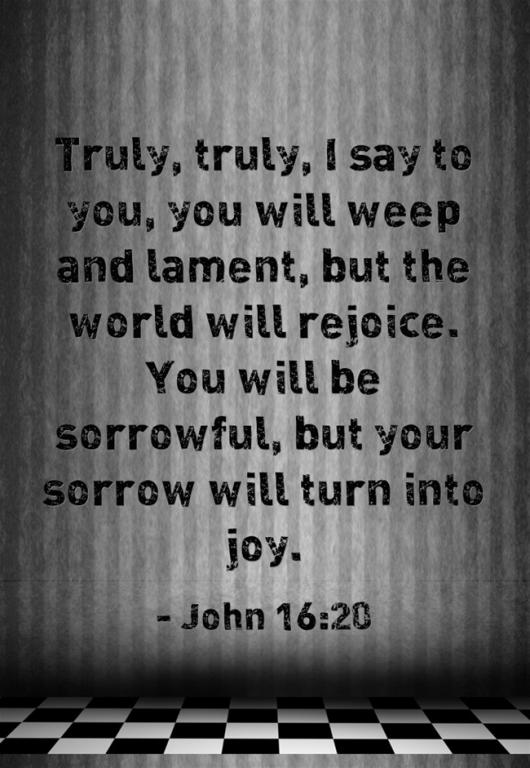 If someone is lamenting, they are having regret, remorse, and repentance which is often tied into lamentations as Joel writes “Put on sackcloth and lament, O priests; wail, O ministers of the altar. Go in, pass the night in sackcloth, O ministers of my God! Because grain offering and drink offering are withheld from the house of your God” (1:13) and so “Lament like a virgin wearing sackcloth for the bridegroom of her youth” (Joel 1:8).

When Stephen the deacon was martyred, “Devout men buried Stephen and made great lamentation over him” (Acts 8:2) because he was such a good man, full of the Spirit of God and was one of the greatest witnesses for Christ in the first century church. Jesus expressed lament over Jerusalem when He said “O Jerusalem, Jerusalem, the city that kills the prophets and stones those who are sent to it! How often would I have gathered your children together as a hen gathers her brood under her wings, and you were not willing” (Matt 23:37)! Many followed Jesus as He went to the cross as it says “there followed him a great multitude of the people and of women who were mourning and lamenting for him” (Luke 23:27) but even while Jesus was bearing His cross after His tortuous scourging, He said to the women, “Truly, truly, I say to you, you will weep and lament, but the world will rejoice. You will be sorrowful, but your sorrow will turn into joy” (John 16:20) and that joy would come at the resurrection of Christ.

If you have seen that your sins have separated you from God (Isaiah 59:2) and that you have the wrath of God abiding on you since you don’t believe in Christ (John 3:36b), you presently stand condemned (John 3:18). My question for you is will you lament over your sins? Will you repent of them and turn to God and forsake your life of sin and place your trust in Christ? That is your only hope of avoiding the coming wrath of God on all unrepentant sinners (Rev 21:8). If you don’t you will know all too well about lamenting because you’ll do nothing but that for time without end (Rev 20:12-15).

August 20, 2015
What Does Jehovah Mean? A Biblical Study On The Word Jehovah
Next Post