What Does Woe Mean? A Biblical Definition Of Woe

What does the word “woe” mean? It is a judgment or an emotional response to something? What’s the biblical definition of what the “woe” mentioned is Scripture.

The word “woe” is often used to express grief, regret, misfortune or grievous distress stated from such a great affliction of some sort or being in such trouble that an escape out of it seems impossible. Sometimes, a woe is almost beyond description and words fail us so a “woe” may be the only thing we can say to express our feelings, very much like when we groan. The biblical definition is even more “woeful” than I have described here as we shall read.

A Word of Judgment

The word “woe” in the Greek is “ouai” and is more than just an expression of a feeling. Woe is a judgment as we read in the Book of Revelation (chapters 8. 9, 11, and 12). It means “alas” or almost like “oh no!” When the word woe is used, it is quite possibly signifying impending doom, condemnation and/or the wrath of God so it is never used to only emphasize something in the sentence in which it is used. The context is always king when this word is used. The Hebrew word for woe is “howy” and essentially means the very same thing as it does when used in the New Testament. Jesus used the word woe more than anyone else in the Bible. The Gospel of Luke has twice as many woes (13) than the nearest book in Old Testament (Ezekiel has 6) and only Matthew has nearly as many (12). When God’s judgment upon sinful mankind is being revealed, the Apostle John writes “Woe, woe, woe to those who dwell on the earth, at the blasts of the other trumpets that the three angels are about to blow” (Rev 8:13) so he is showing the greatest significance possible by repeating it three times. Use of a word three times in the Bible is so rare that it is only done when the holiness of God is described in Revelation 4:8 and in Isaiah 6:3. Jesus used the word “woe” seven times in Matthew chapter 23 indicating a completeness of the woes (or judgments) of God as seven is the number of completion or perfection, indicating God’s judgment will be complete and perfectly just. 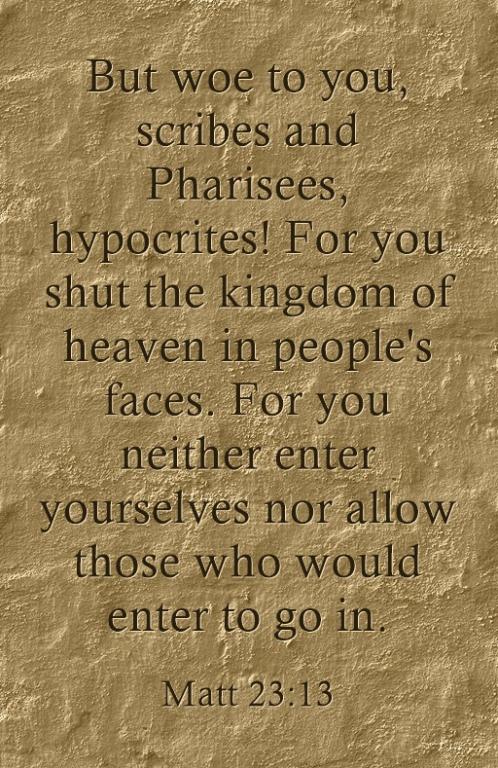 The Woe of Warning

Hosea gives us a good idea of the use of the word woe in writing about Israel, “Woe to them, for they have strayed from me! Destruction to them, for they have rebelled against me! I would redeem them, but they speak lies against me” (Hosea 7:13) and the Philistines living in Canaan, “Woe to you inhabitants of the seacoast, you nation of the Cherethites! The word of the Lord is against you, O Canaan, land of the Philistines; and I will destroy you until no inhabitant is left” (Zeph 2:5). There are also woes to them who cause others to stumble (sin) as Habakkuk writes “Woe to him who makes his neighbors drink— you pour out your wrath and make them drunk, in order to gaze at their nakedness” (Hab 2:15)! Have you ever had someone tempt you to sin? If you are a believer, that person who is trying to get you to sin has the judgment (woe) of God on them as Jesus’ said in Matthew 18:7 “Woe to the world for temptations to sin! For it is necessary that temptations come, but woe to the one by whom the temptation comes!” There is also a woe given to those who acquire riches by evil means as Habakkuk writes, “Woe to him who gets evil gain for his house, to set his nest on high, to be safe from the reach of harm” (Hab 2:9)!

The greatest concentration of woes in the Bible is found in Matthew 23. Here, Jesus uses them against the religious leaders who believed in their own righteousness, which was really no righteousness at all but a self-righteousness which was a stench in the nose of God. Jesus first addresses the scribes and the Pharisees by saying “But woe to you, scribes and Pharisees, hypocrites! For you shut the kingdom of heaven in people’s faces. For you neither enter yourselves nor allow those who would enter to go in” (Matt 23:13) because they were creating an impossible standard for entering the kingdom that none could seem to enter. When they made converts, Jesus said “Woe to you, scribes and Pharisees, hypocrites! For you travel across sea and land to make a single proselyte, and when he becomes a proselyte, you make him twice as much a child of hell as yourselves” (Matt 23:15) meaning that they would do anything to make a convert of Judaism but then they required of them such a standard of self-righteousness that no one could possibly achieve salvation. They tithed the smallest of things that weren’t ever required but “neglected the weightier matters of the law: justice and mercy and faithfulness. These you ought to have done, without neglecting the others” (Matt 23:23). They looked holy on the outside but Jesus knew their heart and that “inside they are full of greed and self-indulgence” (Matt 23:25) and outwardly they “appear beautiful, but within are full of dead people’s bones and all uncleanness” (Matt 23:27b).

We must have the righteousness of God to enter the kingdom. No amount of self-righteousness will ever be enough because God sees our good works as nothing more than filthy rags (Isaiah 64:6) and God will not accept them. That presents a problem since only righteous people can enter the kingdom as it is written “nothing unclean will ever enter it, nor anyone who does what is detestable or false” (Rev 21:27). Here’s how the problem can be solved. We must repent and trust in Christ because it was “For our sake he made him to be sin who knew no sin, so that in him we might become the righteousness of God” (2nd Cor 5:21).

August 20, 2015
What Does Lament Mean? A Biblical Definition of Lament Or Lamenting
Next Post