Top 7 Bible Verses About Identify: Who Are We In Christ

Top 7 Bible Verses About Identify: Who Are We In Christ October 15, 2015 Jack Wellman

Here are my top seven Bible verses about our identity in Jesus Christ.

Second Thessalonians 5:17 “Therefore, if anyone is in Christ, he is a new creation. The old has passed away; behold, the new has come.”

If you’ve ever read Romans chapter seven then you’ll see that Paul’s moving from the old man to the new is not easy. The old nature seems to keep surfacing from time to time. The truth is that no Christian this side of heaven will ever be sinless…we should sin less, but never perfect but moving toward perfection. Even though we don’t achieve perfection, God sees us as having Jesus’ own righteousness imputed to us (2nd Cor 5:21). That’s why we should “Forget the former things; do not dwell on the past” (Isaiah 43:18). You are a new creation, created by God’s Spirit through Jesus’ redemptive work on the cross and so God gave “you a new heart and put a new spirit in you” (Ezk 36:26).

Romans 6:4 “We were buried therefore with him by baptism into death, in order that, just as Christ was raised from the dead by the glory of the Father, we too might walk in newness of life.”

Baptism is a great symbol of the old man dying and being buried and then raised to new life in Christ but believers are buried with him and exactly as Jesus was raised from the dead, we too shall be someday. Therefore, as new creatures in Christ, “we too [should] walk in newness of life.” A new creature (or creation) in Christ will pursue new interests, follow new desires, and seek new goals. For the Christian it will be to focus on Jesus Christ, following His commands, and to make our wills in alignment with His.

Ephesians 4:22-24 “Put off your old self, which belongs to your former manner of life and is corrupt through deceitful desires, and to be renewed in the spirit of your minds, and to put on the new self, created after the likeness of God in true righteousness and holiness.”

The phrase “put on the Lord Jesus Christ” (Rom 13:13) is used a few times in the New Testament but you cannot put on the Lord Jesus Christ until you take “off your old self” which now “belongs to your former manner of life.” This is only possible by the regenerative work of God the Holy Spirit which restores what was fallen due to sin into a self that is daily being “created after the likeness of God in true righteousness and holiness.” 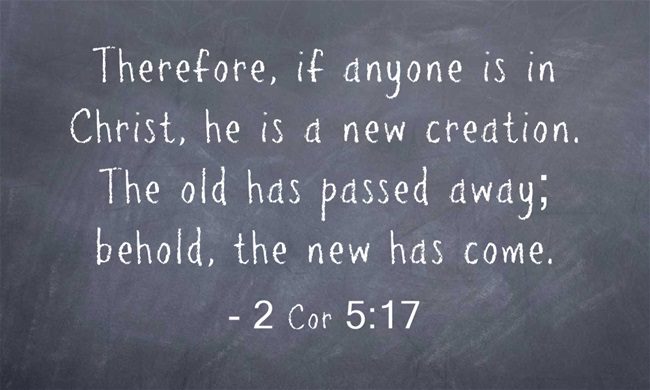 Colossians 3:10 “and have put on the new self, which is being renewed in knowledge in the image of its Creator.”

Just like Paul wrote to the church at Ephesus (4:22-24), he writes something very similar to the church at Colossae, “put on the new self” which is “being renewed in knowledge in the image of its Creator.” We don’t do the renewing but we do participate in it. The Christian must do the “putting on” of “the new self” but that new self is being renewed and reshaped into the image of the Creator, hopefully, day by day.

Galatians 3:27 “for all of you who were baptized into Christ have clothed yourselves with Christ.”

Paul is telling the church at Galatia that all of them were baptized into Christ and all that are baptized into Him, are also clothed with His righteousness which is what 2nd Cor 5:21 says that it was “For our sake he made him to be sin who knew no sin, so that in him we might become the righteousness of God.” After repentance and faith in Christ, we are clothed with Christ and when God looks at us, He doesn’t see the former filthy rags we had. He only sees the same righteousness that Jesus has and it is only “in Christ Jesus you are all sons (and daughters) of God, through faith” (Gal 3:26).

First Peter 4:13 “But rejoice insofar as you share Christ’s sufferings, that you may also rejoice and be glad when his glory is revealed.”

Paul saw the connection between suffering and being Christ-like as he wrote, “Now I rejoice in my sufferings for your sake, and in my flesh I am filling up what is lacking in Christ’s afflictions for the sake of his body, that is, the church” (Col 1:24) and Paul certainly knew a lot about suffering persecution. Peter’s conclusion was that “If you are insulted for the name of Christ, you are blessed, because the Spirit of glory and of God rests upon you” (1st Pet 4:14) and I would think we’d all want that!

Philippians 4:5-6 “Have this mind among yourselves, which is yours in Christ Jesus, who, though he was in the form of God, did not count equality with God a thing to be grasped.”

This mind, the mind of Christ, is something that believers already have access to. This mind was one of humility and servanthood. Even though He is God, He didn’t think it was something to be held onto tightly. He came in the flesh (John 1) to die for the sins of all who would repent and have faith (John 3:16-17) “so that in Christ Jesus the blessing of Abraham might come to the Gentiles, so that we might receive the promised Spirit through faith” (Gal 3:12).

Paul instructed Timothy to “Follow the pattern of the sound words that you have heard from me, in the faith and love that are in Christ Jesus” (2nd Tim 1:13) and that included the Scripture that he had learned from his youth. If you have believed God and His Word and repented of your sins and then placed your trust in Christ, “you have died, and your life is hidden with Christ in God” (Col 3:3) yet to be revealed someday in glory (Rom 8:18).

October 15, 2015
Top 6 Bible Verses About God Being With You
Next Post