Does God Punish Us When We Sin?

Does God punish us immediately after we sin? Are there times when He withholds it or when it comes right away?

When Does Discipline Come?

God does punish sin…but the punishment might be the natural consequences of reaping what we have sown. All sin must be dealt with; God doesn’t sweep sin under the carpet and say, “Oh well, humans will be humans!” The only way to avoid receiving the consequences of sin is to avoid the sin. This isn’t humanly possible of course but God has provided a way. Specifically, God provided His Son to take the punishment that we deserve of which He deserved none. If a person has authentically repented and trusted in Christ, then they will not face any punishment from their sins because Jesus died for them (John 3:16) but if a person doesn’t trust in Christ but in themselves, then they will have to pay for their own sins (Rev 21:8). God doesn’t always swiftly send His judgment immediately after we sin. Sometimes he allows us to see our sin and repent of them and ask for His forgiveness (1st John 1:9). At other times, He will allow us to stew in our own troubles to humble us to come before Him. There is no hard, fast rule or principle found in the Bible when God will punish sin. For the believer, there is no fear of punishment because it was placed on Christ. For the unbeliever there is only “a fearful expectation of judgment, and a fury of fire that will consume the adversaries” (Heb 10:27) and “It is a fearful thing to fall into the hands of the living God” (Heb 10:31). 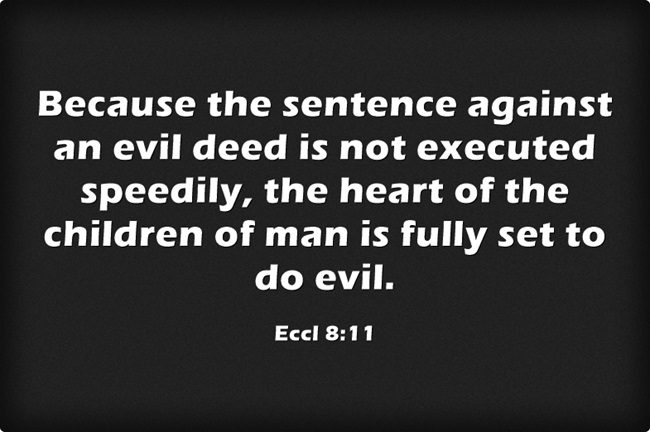 There is no fear of God

Today it seems there is never any preaching about the fear of God and as a result, there is little fear of God even among Christians. Unbelievers have no fear of God; at least that’s what they say but read what Jesus said, “But I will show you whom you should fear: Fear him who, after your body has been killed, has authority to throw you into hell. Yes, I tell you, fear him” (Luke 12:5). Fear is a deep, holy, reverential respect and reverence for God and His Word. The fear of God is the very beginning of wisdom (Psalm 111:10) but as Paul looked out in his world, just as it is today, “There is no fear of God before their eyes” (Rom 3:18). If they only knew that God would judge them for their works, without having the required righteousness of Christ (2nd Cor 5:21), they would read this and fear; “And I saw the dead, great and small, standing before the throne, and books were opened. Then another book was opened, which is the book of life. And the dead were judged by what was written in the books, according to what they had done” (Rev 20:12).

God sometimes sends swift and immediate discipline or punishment. At other times, He withholds it for a time. He alone knows why and I cannot question His timing. Because the wicked do evil and live long lives and some live good lives and die young, they might question the goodness of God and so Solomon wisely wrote “Because the sentence against an evil deed is not executed speedily, the heart of the children of man is fully set to do evil” (Eccl 8:11). Why does God wait sometimes to punish sin? Why does it seem the guilty go free when many of the innocent ones get taken? For one thing, “The LORD, the LORD, the compassionate and gracious God, slow to anger, abounding in love and faithfulness” (Ex 34:6) so He may be waiting for someone to repent but know this, it will come. The prophet Habakkuk asked “O Lord, how long shall I cry for help, and you will not hear? Or cry to you “Violence!” and you will not save” (Hab 1:2). One example of an immediate judgment by God was when King Herod spoke once and heard “the people were shouting, “The voice of a god, and not of a man!” then “Immediately an angel of the Lord struck him down, because he did not give God the glory, and he was eaten by worms and breathed his last” (Acts 12:22-23). Interestingly, right after this happened and the people feared, “the word of God increased and multiplied” (Acts 12:24). There seems to be a connection between the fear of God and His Word and God giving the increase but even if the punishment for sin comes slowly, it is coming because “it is appointed for man to die once, and after that comes judgment” (Heb 9:27).

Jesus warned the self-righteous and unrepentant “Do not be afraid of those who kill the body but cannot kill the soul. Rather, be afraid of the One who can destroy both soul and body in hell” (Matt 10:28) however, “The Lord is not slow in keeping his promise, as some understand slowness. Instead he is patient with you, not wanting anyone to perish, but everyone to come to repentance” (2nd Pet 3:9) so if you are not saved then today could be your day to have your sins cleared and the punishment cancelled (2nd Cor 6:2). Waiting could be the worst decision of your life….and the life to come.

October 18, 2015 Does God Test Us? If So Why?
Recent Comments
5 Comments | Leave a Comment
Browse Our Archives
get the latest from
Christian Crier
Sign up for our newsletter
POPULAR AT PATHEOS Evangelical
1