Does God Get Tired And Need Rest?

There was a Sabbath rest for the people of Israel as it says in Exodus 31:17: “It is a sign forever between me and the people of Israel that in six days the Lord made heaven and earth, and on the seventh day he rested and was refreshed.” Why was God refreshed? Was it because after God’s creation was complete He said “that it was good” (Gen 1:25) because in the beginning it was good. The Garden of Eden was a veritable paradise in fact. God blessed this day as we read in Genesis 2:2-3: “And on the seventh day God finished his work that he had done, and he rested on the seventh day from all his work that he had done. So God blessed the seventh day and made it holy, because on it God rested from all his work that he had done in creation.” The word used for “rest” in the Hebrew is not like taking a nap or sleeping. Rest in the Hebrew is “shabath” and it means “to cease, desist” or “to rest” so in the context of Genesis chapters one and two and in Exodus 31, just as God rested after the creation week, we too can rest or cease and desist from our everyday work activities. We can be refreshed, even if we’re not tired. The point is we can cease from doing what we had been doing during the week and find pleasure in that, just as God did after the creation week so the end of Exodus 31:17 could just as easily read “and on the seventh day he ceased from His creating and was refreshed” by His creation or took great pleasure in it as He “saw it was good.” 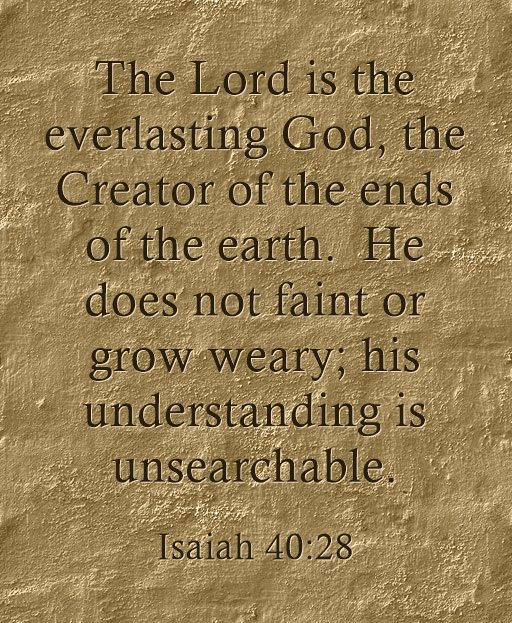 The idea that God gets tired or needs rest is contrary to biblical texts. Isaiah wrote “The Lord is the everlasting God, the Creator of the ends of the earth. He does not faint or grow weary; his understanding is unsearchable” (Isaiah 40:28) and on the contrary “He gives power to the faint, and to him who has no might he increases strength” (Isaiah 40:29). The sections of Scripture that say God “rested and was refreshed” do not mean that God grew tired. God never grows faint or weary but we do (Isaiah 40:29). God “will not falter or be discouraged till he establishes justice on earth. In his teaching the islands will put their hope” (Isaiah 42:4). Ask yourself, “Is anything too hard for the Lord” (Ex 18:14) since “With man it is impossible, but not with God. For all things are possible with God” (Mark 10:27)?

Since we know that God never grows tired we can focus on His dynamic, all-potent power as declared in Hebrews 1:3 which says “he upholds the universe by the word of his power” and of Christ it is said “He is before all things, and in him all things hold together” (Col 1:17). Jesus has all authority in heaven and on earth (Matt 28:18) and said “But if it is by the finger of God that I cast out demons, then the kingdom of God has come upon you” (Luke 11:20). Want to know the scale of that power? “It is he who made the earth by his power” (Jer 10:12) and He simply “spoke, and it came to be; he commanded, and it stood firm” (Psalm 33:9). After we come to know God and after reading His Word, the Bible, it is by “faith we understand that the universe was formed at God’s command” (Heb 11:3). We have read of the omnipotence of God. We know He never tires but instead, gives strength to the weary.

Do you grow weary during the week? I think most of us do, at least those of us who don’t exercise. I can rest in the fact that God will give me strength when I am weak. We know that “He does not faint or grow weary; his understanding is unsearchable” (Isaiah 40:28) and so God never gets tired nor does He need to rest at any time. We on the other hand, most certainly do!