Did Jesus Go To School? What Did His Education Likely Include?

Did Jesus Go To School? What Did His Education Likely Include? October 22, 2015 Jack Wellman

Did Jesus ever go to school? What was His education like? What courses were included?

Children in Jesus’ day were not much different than they are today. They were required to get an education and of course that included the Scriptures (the Old Testament). It was written of Jesus that “the child grew and became strong, filled with wisdom. And the favor of God was upon him” (Luke 2:40). Once, when Jesus’ parents attended the Feast of Passover, they left to return to Nazareth only to find that Jesus was not with them. When they searched for Him, it was “After three days they found him in the temple, sitting among the teachers, listening to them and asking them questions. And all who heard him were amazed at his understanding and his answers” (Luke 2:46-47). Jesus astounded many because “Jesus increased in wisdom and in stature and in favor with God and man” (Luke 2:52). Where did Jesus get all of this wisdom and education?

Jesus was like most Jewish boys. He learned from His parents at home about the Scriptures and Jewish history and culture. All Jewish males were also offered free public education which was instituted for all male students in the first century, BC. As part of their education all of the boys were taught Scripture and law but also included reading, writing, history, elementary sciences and mathematics. This was extended to all Jewish male children, regardless of rank or social standing. The Apostle Paul as a child and later, a young man learned “the law of our fathers” (Acts 22:3) just like Timothy did as Paul wrote “From childhood you have known the sacred writings” (2 Tim. 3:15) so apparently his mother and grandmother, who were devout women (2nd Tim. 1:5), either educated him in the Scriptures themselves or hired someone to do it and the same thing could likely be said of Jesus. Paul was one of the most brilliant men in the Roman Empire since he learned from a master teacher, studying at the feet of Gamaliel so education was not an option for most Jewish boys, it was a necessary requirement. 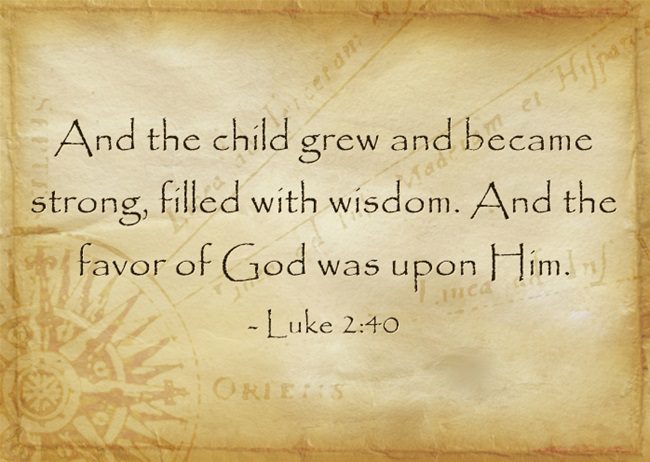 We know that Jesus knew how to read since He read the Scriptures in the temple (Luke 4:16) and knew how to write (John 6:6, 8). The responsibility for the first level of formal education belonged to the father but in Jesus’ stepfather’s case it may have been His mother since Joseph may have died early. Just as soon as the child was able to speak, he was to be taught some Bible verses and the Jewish alphabet. Immediately after the child learned the Jewish alphabet they start reading and studying the Torah (the first five books of the Old Testament).

Apparently Joshua ben Gamliel instituted rules regulating schools and this was likely very formalized by the time Jesus was a youth as by age six or seven, all Jewish boys were expected to begin their education. Just as in schools today the boys were taught reading by drawing letters on a board. The child’s first reading was normally done in the book of Leviticus since it contained some of the rules which were necessary for daily living. The main textbook then was the Torah itself and reading it, memorizing it, and reciting it were expected of every boy.

We don’t know precisely every subject that Jesus learned in school and at home but we know it must have been the Law, the Torah, Jewish history but as I wrote earlier, it probably contained included reading, writing, history, elementary sciences and mathematics. Jesus must have had education in non-religious areas since he was a carpenter and carpenters certainly needed how to do mathematics and also had to know how to read and write.