Does The Bible Condone Slavery?

Does the Bible really condone slavery?

We are slaves to whatever we are consumed by or led to do. We might be consumed with all sorts of evil desires that in some cases are not even acceptable to most of society, so in whatever way we live our lives, we are in submission to something. For mankind, we are slaves of sin, being born and conceived in sin (Psalm 51:5). Paul recalls a time for the Christians at Rome that “when you were slaves of sin, you were free in regard to righteousness. But what fruit were you getting at that time from the things of which you are now ashamed? For the end of those things is death” (Rom 6:20-21) and the payout in wages is death (Rom 6:23) all as a result of the fall where “sin entered the world through one man, and death through sin, and in this way death came to all people, because all sinned” (Rom 5:12). To be clear about what our owner is, Paul writes “Don’t you know that when you offer yourselves to someone as obedient slaves, you are slaves of the one you obey–whether you are slaves to sin, which leads to death, or to obedience, which leads to righteousness” (Rom 6:16)? We are “slaves of the one [we] obey” and for all of mankind, that is sin (Rom 3:10-12, 23). 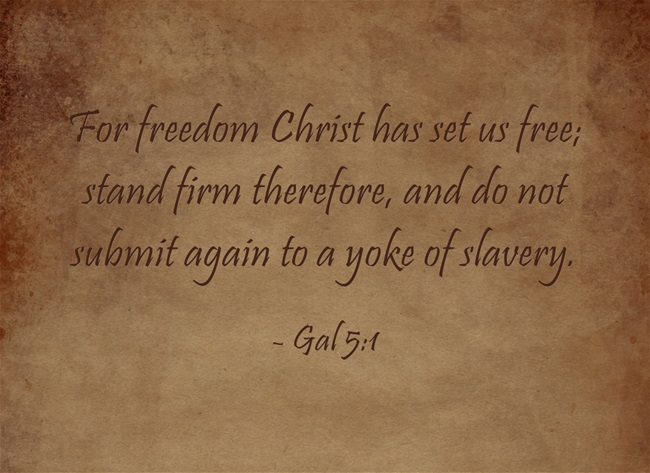 Slavery in the Old Testament

There were laws in regards to the treatment of slaves that even the pagan nations around Israel had little regard for. Part of the Old Testament Mosaic Laws, and a civil law to be precise, was “Whoever steals a man and sells him, and anyone found in possession of him, shall be put to death”(Ex 21:16). This sounds very much like kidnapping and God takes this very seriously because they are taking another human being by force and against their will and someone who is created in the image of God (Gen 1:27), and then sell him or her as you would a piece of property. The contempt held by someone doing this is an abomination to God and today this crime is considered a felony. Israel had become enslaved and treated very harshly by Egypt when God brought them out of slavery (Jer 34:13) so taking someone by force is not something God ever condones.

God knew that there would always be the poor among the people so He made a provision for these disenfranchised people to be able to sell themselves into slavery for a time so that they wouldn’t starve to death. The master or owner could use them for their benefit so that their debt could be paid and this also provided shelter for them but if the debt wasn’t pain in seven years, they had to let them go anyway (Duet 15:12-15). In the New Testament, some of the same things happened but Paul told these masters to “treat your bondservants justly and fairly, knowing that you also have a Master in heaven” (Col 4:1). This was a command to be kind and considerate to their slaves and to treat them fairly.

The relationship between a master and slave was not what most people might think in the first century and within the Roman Empire. A servant would work for the day and then go home but a slave lived with the master and came to be regarded as part of the family and often was included in family events. Some were even adopted and had inheritance rights. It wasn’t what we might think about slavery but nowhere in the Bible does God ever command or even suggests that we seek to buy someone for the purpose of making them our slaves, not counting those who may have to sell themselves as slaves in order to survive.

For those still enslaved by sin, Jesus asks you to repent and believe (Mark 1:15) “For freedom Christ has set us free; stand firm therefore, and do not submit again to a yoke of slavery” (Gal 5:1). Today, “There is neither Jew nor Greek, there is neither slave nor free, there is no male and female, for you are all one in Christ Jesus” (Gal 3:28) and all may freely come to Christ (John 3:16) or they are free to remain as slaves to sin which leads to death (Rom 6:21, 23).

October 22, 2015
Did Jesus Speak In Tongues When He Was Here?
Next Post

October 22, 2015 Should The Church Do Exorcisms?
Recent Comments
1 Comment | Leave a Comment
Browse Our Archives
get the latest from
Christian Crier
Sign up for our newsletter
POPULAR AT PATHEOS Evangelical
1