What Is A Zealot? Who Were The Zealots In The Bible?

Who or what is a Zealot? Who were the Zealots mentioned in the Bible?

Who are the Zealots?

The name “Zealot” was first used by Josephus to describe the militant Jews in the War of 66-70 however the designation has come to be used of all who rebelled against Rome and these men were filled with zeal or a passionate desire to such intensity that they would fight against any threatened institution or ideology. They clung to the Torah as the foundation of all things and resisted any foreign rule. Simon the Zealot was among those disciples whom Jesus chose (Matt 10:4). Though the Zealots were sometimes called the first terrorists, not all Zealots were violent but all the Zealots desired to forcibly remove the Roman government from Judea and if it took violence to do it, so be it.

Zealous for the Lord

Its one thing to have a zeal for a cause but to be zealous of the Lord and His law is another. Paul said “I am a Jew, born in Tarsus in Cilicia, but brought up in this city, educated at the feet of Gamaliel according to the strict manner of the law of our fathers, being zealous for God as all of you are this day” (Acts 22:3) but in his youth he said “I was advancing in Judaism beyond many of my own age among my people, so extremely zealous was I for the traditions of my fathers” (Gal 1:14) but the tradition of his fathers was in direct opposition to the gospel of Jesus Christ. Being zealous for Christ is what God desires for all of us as Peter wrote “Now who is there to harm you if you are zealous for what is good” (1st Pet 3:13). When Jesus was writing to the churches in the Book of Revelation He said “Those whom I love, I reprove and discipline, so be zealous and repent” (Rev 3:19) so being zealous is like having a great passion for the things of God, including living in obedience to God, however the Zealots were consumed with a passion for the Law but not for Christ and to overthrow those who ruled over them (the Romans). 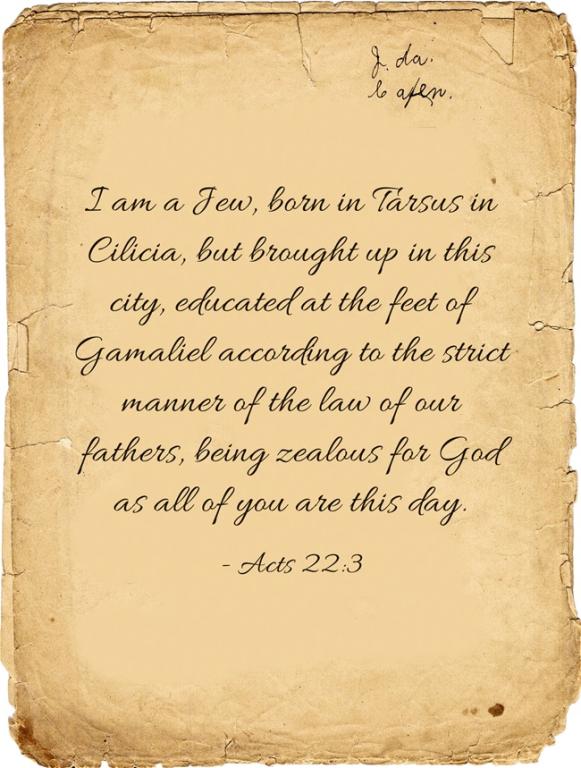 The Zealots were founded by Judas of Galilee and Zadok the Pharisee. Josephus, the Jewish historian wrote of the Zealots that they “agree in all other things with the Pharisaic notions; but they have an inviolable attachment to liberty, and say that God is to be their only Ruler and Lord” (Antiquities 18.1.6). The Zealots were one of four Jewish groups that existed during the time of Jesus’ earthly ministry and they deeply desired to overthrow the Roman’s from their dominance of Judea. Gamaliel was a well-known and greatly respected Pharisee who was a member of the Sanhedrin and he directly references the Zealots in the New Testament. He used what happened to Judas and his group to urge the council to treat the apostles carefully telling the council “And he said to them, “Men of Israel, take care what you are about to do with these men. For before these days Theudas rose up, claiming to be somebody, and a number of men, about four hundred, joined him. He was killed, and all who followed him were dispersed and came to nothing” (Acts 5:35-36) and said “After him Judas the Galilean rose up in the days of the census and drew away some of the people after him. He too perished, and all who followed him were scattered. So in the present case I tell you, keep away from these men and let them alone, for if this plan or this undertaking is of man, it will fail; but if it is of God, you will not be able to overthrow them. You might even be found opposing God!” So they took his advice” (Acts 5:37-39).

The end of the Zealots did not come easily but in 70 A.D., after Jerusalem was destroyed and the Temple burned to the ground, 960 zealous Jews took refuge by capturing Masada which was originally a Roman fortress. Although a Legion was sent by Rome to recapture Masada, it failed to do so in the first few years of the campaign and the Zealots, hunkered down in this fortress were able to hold off the mighty Roman army even after the invention of new weapons to use against it. In 73 A.D., the Romans finished a huge siege ramp made of earth that led to Masada and gave them the ability to use the full power of their newly made siege engines against the walls of Masada. When the fortress was finally stormed, the Romans found all the people had committed suicide and the bravery of these people led to Masada being modern Israel’s most popular paid tourist attraction.

God is our true refuge and not a military force like the Zealots. We can be zealous for the Lord but must use caution for even the Jews were zealous for the Law. When Paul spoke to the church leadership at Jerusalem he related how God had been bring many of the Gentiles to Christ “And when they heard it, they glorified God. And they said to him, “You see, brother, how many thousands there are among the Jews of those who have believed. They are all zealous for the law, and they have been told about you that you teach all the Jews who are among the Gentiles to forsake Moses, telling them not to circumcise their children or walk according to our customs” (Acts 20:20-21) which of course wasn’t true so there’s a risk of being zealous for the wrong things. Should we not rather be zealous to live holy lives and to proclaim the gospel for the glory of God? God looks down from heaven favorably at that type of zeal.