What Are The Different Types Of Demons In The Bible?

What are the different types of demons mentioned in the Bible? Are there ranks of demons given in Scripture?

What is a Demon?

Basically, a demon is a fallen angel that rebelled against God in heaven along with Lucifer. The Greek word used for demon (“daimonion”) means a spirit being but an inferior being to God, although he is superior to man. Like all angels, they have supernatural strength but are restrained by God to do only what He wills for them to do (or allows) (Job 1). Lucifer wanted to not only overthrow God in heaven, he wanted to sit on the throne of the Most High God. Of Lucifer, God said “You said in your heart, ‘I will ascend to heaven; above the stars of God I will set my throne on high; I will sit on the mount of assembly in the far reaches of the north; I will ascend above the heights of the clouds; I will make myself like the Most High” (Isaiah 14:13-14) so what came of this? God said “you are brought down to Sheol, to the far reaches of the pit. Those who see you will stare at you and ponder over you: ‘Is this the man who made the earth tremble, who shook kingdoms” (Isaiah 14:15-16). God speaks of His eventual punishment of Satan as if it’s already done (Rev 20:15). Satan failed miserably and was thrown out of heaven but when he was, he took about 1/3rd of the angels with him (Rev 21:4) and these became demons (fallen angels).

From Perfection to Corruption

Satan fell from heaven or was thrown done to earth because he wanted to become God and desired worship, as he always does, as we see in Satan’s temptation of Jesus in the wilderness (Matt 4:9) so what happened? At one time, Lucifer was “the seal of perfection, full of wisdom and perfect in beauty” (Ezk 28:12) and extraordinarily glorious (Ezk 28:14) as he was the “anointed guardian cherub. I placed you; you were on the holy mountain of God; in the midst of the stones of fire you walked” (Ezk 28:14). Satan was not satisfied with being a powerful cherub over God’s throne. He wanted to be God but no created being can ever overtake the One Who created him and so, at the end of the age, “the devil who had deceived them was thrown into the lake of fire and sulfur where the beast and the false prophet were, and they will be tormented day and night forever and ever” (Rev 20:10). Pride was the cause of Satan’s fall and the cause of many of mankind’s fall because they still want to ascend above God and sit in His throne (Isaiah 14:13). 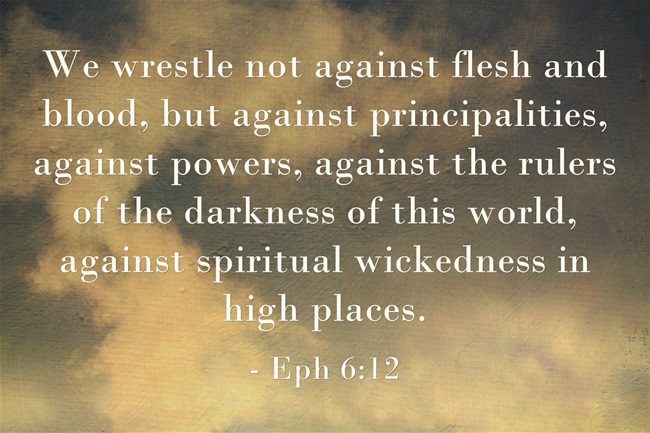 Are there Differences in Demons?

Theologians who have studied the subject of whether there are different kinds and ranks of demons have often turned to Ephesians chapter six which says “we wrestle not against flesh and blood, but against principalities, against powers, against the rulers of the darkness of this world, against spiritual wickedness in high places.” (Eph 6:12). Is there differences between the demons who are “rulers,” those who are “powers,” those who are in “high places,” and those who are “principalities?” It could be because in the final days of King Saul’s reign, “a harmful spirit” tormented him (1st Sam 16:14) and Jesus spoke about a specific demon when He rebuked a “mute and deaf spirit, I command you, come out of him and never enter him again” (Mark 9:25). Also, when Daniel prayed to God, it took three weeks for his prayer to be answered, even though the angel told Daniel “your words have been heard, and I have come because of your words” (Dan 10:12) but “The prince of the kingdom of Persia withstood me twenty-one days, but Michael, one of the chief princes, came to help me, for I was left there with the kings of Persia” (Dan 10:13) or for three weeks. The angel needed a little help to get through to Daniel so God sent Michael, who was one of the chief princes, to come and help him. Of himself (left alone), he couldn’t overtake the “kings of Persia,” very likely meaning that there were different princes or demons of darkness, that were preventing him getting Daniels answer from God.

Jesus once warned about having a demon cast out of a person for “Then it says, ‘I will return to my house from which I came.’ And when it comes, it finds the house empty, swept, and put in order. Then it goes and brings with it seven other spirits more evil than itself, and they enter and dwell there, and the last state of that person is worse than the first. So also will it be with this evil generation” (Matt 12:44-45) so there are obviously some demons that are “more evil than” others. Today, many demons are found behind the pulpits as the Apostle Paul said “Now the Spirit expressly says that in later times some will depart from the faith by devoting themselves to deceitful spirits and teachings of demons” (1st Tim 4:1). The Apostle Peter also warned that “false prophets also arose among the people, just as there will be false teachers among you, who will secretly bring in destructive heresies, even denying the Master who bought them, bringing upon themselves swift destruction” (2nd Pet 2:1) but we know that “such men are false apostles, deceitful workmen, disguising themselves as apostles of Christ” (2nd Cor 11:13). These demonized false teachers, prophets, and pastors preach another gospel “which is really no gospel at all” (Gal 1:7) but is the doctrines of demons (1st Tim 4:1). We shouldn’t be shocked by this “for Satan himself masquerades as an angel of light” (2nd Cor 11:14) and it shouldn’t surprise us “if his servants, also, disguise themselves as servants of righteousness. Their end will correspond to their deeds” (2nd Cor 11:15).

Here is the fate, not only of Satan, but of all who refuse to repent of their sins and put their trust in Christ. It’s found in Revelation 20:10 which says that “the devil who had deceived them was thrown into the lake of fire and sulfur where the beast and the false prophet were, and they will be tormented day and night forever and ever” (Rev 20:10) but this is not for Satan and his demons alone. It is also for “the cowardly, the faithless, the detestable, as for murderers, the sexually immoral, sorcerers, idolaters, and all liars, their portion will be in the lake that burns with fire and sulfur, which is the second death” (Rev 21:8).

December 22, 2015 How Do Demons Attack People According To The Bible?
Recent Comments
3 Comments | Leave a Comment
Browse Our Archives
Follow Us!