Are Christians Still Persecuted In The World Today?

Are Christians still being persecuted today in the world? Is it getting worse?

Why are Christians being persecuted in the first place? For the most part, it’s always been the way of life for the Christian. Jesus said “A servant is not greater than his master.’ If they persecuted me, they will also persecute you. If they kept my word, they will also keep yours” (John 15:20). Jesus didn’t say they might or it’s possible but “they will also persecute you” and “on account of my name, because they do not know him who sent me” (John 15:21b). Paul wrote that “all who desire to live a godly life in Christ Jesus will be persecuted” (2nd Tim 3:12). If you’re a Christian, Jesus promises you that they will persecute you because “all who desire to live a godly life…will be persecuted.” That’s all inclusive for Christians. If you’ve never been persecuted, you’re either afraid to show or share your faith or you’re not one at all because Jesus said “they will persecute you” and Paul says “all” will.

What is Real Persecution?

Real persecution is not badgering people with the gospel, being in their face trying to cram it down their throat, or force-feeding people the Bible against their will. If you are facing hostilities because of these things, it’s not persecution; it’s just being obnoxious. Jesus never forced Himself on any at any time. If you’re fired for spending time at work for witnessing for Christ and not working for which you’re being paid, that’s not persecution; that’s stealing from your employer and getting fired for it. Christians that do such things develop a martyr’s complex and that leads to searching out more persecution. Real persecution is getting fired for refusing to work Sunday because you go to church; you’re excluded from family functions like weddings and holidays; or you’re shunned by everyone at work or your neighbors. In much of the world, Christians are tortured, imprisoned, stripped of all earthly goods, beaten, and some even crucified. That is real persecution. We in the West don’t really know what real persecution is compared to the rest of the world. 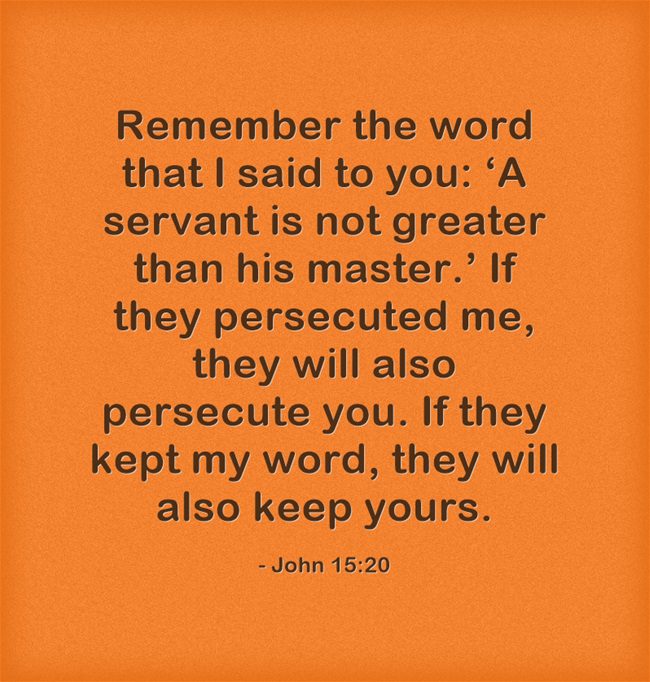 Where is Persecution Greatest?

Most of the persecution takes place where dictators rule like in North Korea. They have one of the worst human rights records of any nation on earth and they are one of the most repressive regimes in the world. Some of what I mentioned previously about what real persecution is, happens in North Korea, including imprisonment, separation from family, family possessions taken by the state, and long, cruel torturous techniques that from some eye witness accounts, is beyond description. In some cases, the guards or staff sees how the Christians suffer and refuse, even under great duress and suffering, to recant their faith in Jesus Christ. They can’t understand how these Christians can “suffer well” and not lose heart. These are true martyrs facing real persecution, and it happens even in places that you might not expect it to, like in the Middle East.

Saudi Arabia is a place where there is severe persecution because their entire society lays in the siege of the heavy handed fundamentalists of the Wahabb Islam. They dominate every facet of life there. The strict interpretation of Islamic Law puts one at risk for death if there is an expression of any other belief system other than Islam. There is no appeal process, no jury trials, just a religious council that does what they want to do.

Iran is also a nation where it’s very dangerous to be a Christian and even though the church is growing in Iran, almost all of them are underground worshipers. Of the top ten countries where persecution is highest in the world, six of them are Muslim. Nations like Afghanistan, Yemen, Syria, Turkey, several nations in Africa, and even Egypt. Three of the top ten countries that persecute Christians are communistic like China, Laos, and North Korea. The Conclusion is that the greatest persecution today comes from Islamic and communist nations and of the top ten nations with the worst Christian persecution, nine of the ten are either Muslim or communist.

Persecution in the West

We are beginning to see some persecution in the West but mainly in restricting Christian influence in the government and public squares. Canada passed legislation a few years ago that calls preaching about the sinfulness of homosexuality a “hate crime,” even if it’s in church. They see it as “hate speech,” even though it’s from the Bible. More and more people are forsaking the assembling of themselves at church while others have just drifted away from anything to do with Christianity. That’s a lot of the reason we don’t get as much persecution in the West as others do, but it is coming. Some say there are dark clouds on the horizon that threaten the freedom of religion in the West. There are increasing numbers of people who want to muzzle the gospel, but for most Christians in these nations, they don’t really know what persecution is…yet.

December 23, 2015
Who Were The Ephesians In The Bible?
Next Post