Who Were The Ephesians In The Bible?

Who Were The Ephesians In The Bible? December 23, 2015 Jack Wellman

Who were the Ephesians mentioned in the Bible?

Who were the Ephesians?

The Ephesian’s were the residents of Ephesus to which Paul visited and wrote the Book of Ephesians too in the form of a letter to the church (while in prison in Rome). There are some indications that Ephesians was written to all the churches as some scholars believe it to be a circular letter distributed to churches within the Roman Empire. Either way, this was a church that Paul had planted but it all began “while Apollos was at Corinth, Paul passed through the inland country and came to Ephesus. There he found some disciples” (Act 19:1). Any place that Paul found disciples, he typically stay for time. Paul realized that these men had only heard of the baptism of repentance of John the Baptists (Acts 19:3-4) so “they were baptized in the name of the Lord Jesus. And when Paul had laid his hands on them, the Holy Spirit came on them, and they began speaking in tongues and prophesying” (Acts 19:5-6).

The city of Ephesus was a prosperous city because the city was located in a natural harbor, which served to increase the wealth of the residents there. Ephesus was an important city for Christianity because it was strategically located so that the gospel could be spread via the many trade routes of commerce that passed through and beyond Ephesus. Even after the Roman’s took control, many of her citizens were very rich. Perhaps because Ephesus was a rich city, the Romans gave their residents more freedom and more rights than others in the Roman Empire. They figured, the more prosperous Ephesus is, the more tax revenue it will bring in. 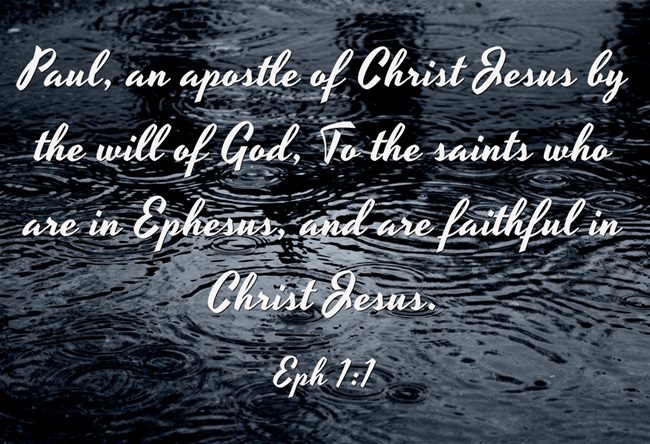 Paul apparently lived in Ephesus for about three years and while there, he worked with the congregation to organize missionary activity into other regions of the Roman Empire. While Paul was in Ephesus, he attended synagogue for about three years, trying to persuade from Scripture that Jesus is the Christ or Messiah but few Jews came to believe, however he did have a substantial number of Greeks that came to believe. Near the end of Paul’s stay, and some believe it was caused Paul to leave, he was embroiled in considerable controversy with some of the local artisans whose livelihood depended on selling statues or idols of Artemis of Ephesus so a riot broke out and the crowds chanted, “Great is Artemis of the Ephesians” (Acts 19:28). When “they recognized that [Paul] was a Jew, for about two hours they all cried out with one voice, “Great is Artemis of the Ephesians” (Acts 19:34). “After the uproar ceased, Paul sent for the disciples, and after encouraging them, he said farewell and departed for Macedonia” (Acts 20:1) so that may have convinced Paul that it was time to leave so Paul left Ephesus but at least he had left a remnant behind him to take root in Ephesus which would allow the church at Ephesus to grow.

Artemis of the Ephesians

Who is this Artemis of the Ephesians? Artemis was a pagan god that they Ephesians declared that all cities are to worship Artemis of Ephesus. The Ephesians esteemed Artemis as being above all the gods. That’s why a riot broke out in Ephesus. Paul had brought a strange doctrine by teaching that there is only one, true God and by extension that meant that Artemis of Ephesus was not a god at all. That simply outraged the city because many of the residents worshipped Artemis. They also made a lot of money in the idol business too and a lot of the artisans or tradesmen made a comfortable living selling idols, and now, their livelihood was threatened by the God who Paul spoke about.

The Church at Ephesus

Jesus sternly rebuked the church at Ephesus in the Book of Revelation by saying “I know you are enduring patiently and bearing up for my name’s sake, and you have not grown weary. But I have this against you, that you have abandoned the love you had at first” (Rev 2:3-4) so “Remember therefore from where you have fallen; repent, and do the works you did at first. If not, I will come to you and remove your lampstand from its place, unless you repent” (Rev 2:5). This seems similar to the Laodicean church which was now lukewarm (Rev 3:15-22). The church, by the time the Apostle John wrote this, the church had lost their first love which new believers have. They had grown comfortable but at least Jesus commended them for “enduring patiently” and “bearing up” from persecution for Jesus’ names sake. At least they had not “grown weary.”

The Book of Ephesians is truly a remarkable letter, especially since Paul wrote this from prison. The church at Ephesus was like a lot of churches today, and like a lot of Christians; they have lost their passion for the faith, they’ve lost that passionate love for God but at least they were enduring. For the Ephesians, they understood that it is only by God’s grace that anyone can be saved (Eph 2:8-9), elsewise, none would be.

December 23, 2015
Who Were The Israelites In The Bible?
Next Post

December 23, 2015 Are Christians Still Persecuted In The World Today?
Recent Comments
1 Comment | Leave a Comment
Browse Our Archives
get the latest from
Evangelical
Sign up for our newsletter
POPULAR AT PATHEOS Evangelical
1