What Are The Four Living Creatures In Revelation?

What or who are the four living creatures in the Book of Revelation?

The first appearance of the four living creatures comes in Revelation 4:8 where the Apostle John writes about “a door standing open in heaven! And the first voice, which I had heard speaking to me like a trumpet, said, “Come up here, and I will show you what must take place after this” (Rev 4:1) and John saw “Around the throne were twenty-four thrones, and seated on the thrones were twenty-four elders, clothed in white garments, with golden crowns on their heads. From the throne came flashes of lightning, and rumblings and peals of thunder, and before the throne were burning seven torches of fire, which are the seven spirits of God, and before the throne there was as it were a sea of glass, like crystal” (Rev 4:4-6a). The “twenty-four elders” who are “clothed in white garments” and had “golden crowns on their heads” may well symbolize the believers who have repented and trusted in Christ and as such, may represent the church. They could also be angelic messengers but other theologians, such as Dr. R.C. Sproul, feels that they are the overcomers who have their crowns and live in the place prepared for them which Jesus spoke about to the disciples in John 14:1-4.

As we continue in Revelation 4, “the four living creatures, each of them with six wings, are full of eyes all around and within, and day and night they never cease to say, Holy, holy, holy, is the Lord God Almighty, who was and is and is to come” (Rev 4:8). These creatures could be cherub angels whose job is to worship God non-stop, 24/7 and “whenever the living creatures give glory and honor and thanks to him who is seated on the throne, who lives forever and ever, the twenty-four elders fall down before him who is seated on the throne and worship him who lives forever and ever. They cast their crowns before the throne, saying” (Rev 4:9-10). Like the angels, the twenty-four elders also worship Him Who is seated on the throne” and Him “who lives forever and ever” clearly meaning Jesus Christ. Their praise ought to be our praise too as they proclaim “Worthy are you, our Lord and God, to receive glory and honor and power, for you created all things, and by your will they existed and were created” (Rev 4:11). Since Jesus is also known as the Creator, this seems to be angelic beings those redeemed by the blood of the Lamb who are worshiping Christ. 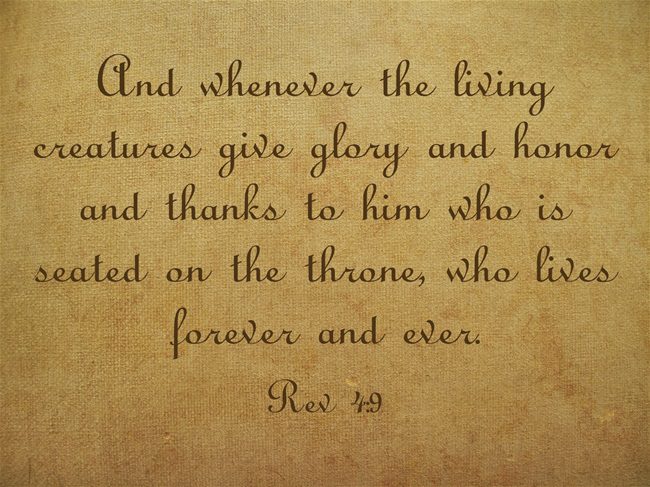 Who are the Four Living Creatures?

All I know for sure is that those who are redeemed by the blood of the Lamb of God, Jesus Christ, will join with the four living creatures and they will also worship the Lamb of God for ever and ever for as John writes, “Worthy are you, our Lord and God, to receive glory and honor and power, for you created all things, and by your will they existed and were created” (Rev 4:11).

December 27, 2015 How Can I Avoid Being Left Behind When The Rapture Occurs?
Recent Comments
8 Comments | Leave a Comment
Browse Our Archives
Follow Us!