What Is The Whore Of Babylon In The Book Of Revelation?

What Is The Whore Of Babylon In The Book Of Revelation? December 27, 2015 Jack Wellman

Who is the “Whore of Babylon” mentioned in the Book of Revelation?

The Judgment of Babylon

When God finally judges Babylon, it will apparently be during a time of earthquake activity that is unparalleled in the world (Rev 16:18) and “The great city was split into three parts, and the cities of the nations fell, and God remembered Babylon the great, to make her drain the cup of the wine of the fury of his wrath.” (Rev 16:19) and instead of repenting, “they cursed God for the plague of the hail, because the plague was so severe” (Rev 16:221b). Why was God’s wrath against Babylon? It was because they had “committed sexual immorality, and with the wine of whose sexual immorality the dwellers on earth have become drunk” with the kings of the earth (Rev 17:2). Some scholars see Babylon as representative of unrepentant mankind that is steeped in immorality, much of it sexual immorality. The judgment of Babylon is the judgment of everyone living or has ever lived, and will yet live that have not repented and trusted in Christ.

The Whore of Babylon

Some translations render Babylon as a whore but others a prostitute but there is really no difference. A male or female prostitute participates in sexual immorality which is why the Apostle John wrote “The woman was arrayed in purple and scarlet, and adorned with gold and jewels and pearls, holding in her hand a golden cup full of abominations and the impurities of her sexual immorality. And on her forehead was written a name of mystery: “Babylon the great, mother of prostitutes and of earth’s abominations” (Rev 17:4-5). Looking at the systemic sexual immorality in the world today, this “whore” has also been “drunk with the blood of the saints, the blood of the martyrs of Jesus” (Rev 17:6) as there has been no shortages of murdering Christians around the world. 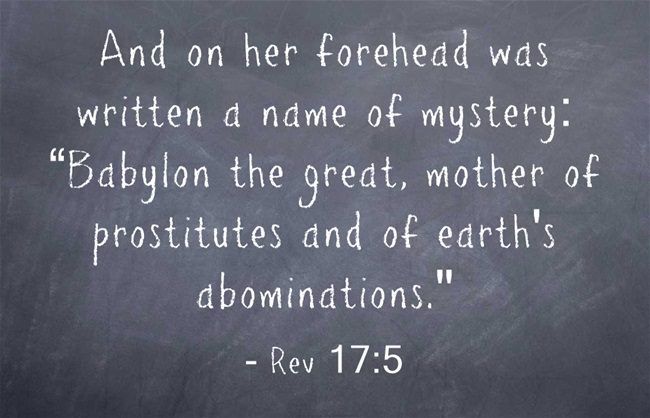 The prostitute or whore seems that it could be an entity that has a worldwide system of power as the angel tells John that “The waters that you saw, where the prostitute is seated, are peoples and multitudes and nations and languages. And the ten horns that you saw, they and the beast will hate the prostitute. They will make her desolate and naked, and devour her flesh and burn her up with fire, for God has put it into their hearts to carry out his purpose by being of one mind and handing over their royal power to the beast, until the words of God are fulfilled” (Rev 17:15-17) so this “woman” has a powerfully dominating worldwide influence because John says that “the woman that you saw is the great city that has dominion over the kings of the earth” (Rev 17:18). She represents all the seductions of the world.

The vast majority of ancient religions involved prostitution and their so-called worship which often included sexual promiscuity. The “woman” who sat on “waters” or many kings and their kingdoms somewhat typifies religious apostasy that has grown exponentially within the last thirty years. What God condemns in His Word is now customarily embraced by some apostate churches, but judgment is coming on this worldwide system called Babylon and the whore who controls it. The many false, apostate churches could well be caught up in this whore’s judgment. John writes that an angel coming down from heaven, indicating it’s God’s message from heaven, and “with a mighty voice” he says “Fallen, fallen is Babylon the great! She has become a dwelling place for demons” (Rev 18:2) because “all nations have drunk the wine of the passion of her sexual immorality, and the kings of the earth have committed immorality with her, and the merchants of the earth have grown rich from the power of her luxurious living” (Rev 18:3). That is why God tells His people “Come out of her, my people, lest you take part in her sins, lest you share in her plagues” (Rev 18:4) which is what Jeremiah the Prophet (Jer 51:45) and the Apostle Peter commands the church to do (1st Pet 1:16) . John tells us that not only has Babylon fallen but it’s fallen twice (Fallen, fallen is Babylon the great!) which may show just how ancient Babylon and modern society are the same. Both embrace false religions and sexual immorality.

The conclusion of this whore or prostitute of Babylon is her utter destruction, upon which is heard “Hallelujah! Salvation and glory and power belong to our God, for his judgments are true and just; for he has judged the great prostitute who corrupted the earth with her immorality, and has avenged on her the blood of his servants” (Rev 19:1-2). Whether you believe it or not doesn’t really matter; what you believe doesn’t change what is true, therefore you too will be judged someday, “For we must all appear before the judgment seat of Christ, so that each one may receive what is due for what he has done in the body, whether good or evil” (2nd Cor 5:10) but if you’ve repented and trusted in Christ, your sin has already been taken away; if not, you must bear it yourself and do so for time without end.

December 27, 2015
What Is The Meaning Of Wormwood From The Book Of Revelation?
Next Post