What Is The Meaning Of Wormwood From The Book Of Revelation?

What Is The Meaning Of Wormwood From The Book Of Revelation? December 27, 2015 Jack Wellman

What does the word “wormwood” mean in the Book of Revelation and in the Old Testament?

The Book of Revelation

The Book of Revelation is not the Apostle John’s book. He writes that it is “The revelation of Jesus Christ, which God gave him to show to his servants the things that must soon take place. He made it known by sending his angel to his servant John” (Rev 1:1) so it is as if he is dictating what Jesus Christ tells him to write down. John is very familiar with the Author of this book because he “bore witness to the word of God and to the testimony of Jesus Christ, even to all that he saw” (Rev 1:2). The Book of Revelation mentions the word “wormwood” (Rev 8:11) but this word is also used in the Old Testament and, as I hope to show, it is very closely associated with the use of wormwood in the Book of Revelation.

Wormwood in the Old Testament

Solomon use the word wormwood in the very same context as did Jeremiah and Amos the Prophet. Solomon wrote that “the lips of a forbidden woman drip honey, and her speech is smoother than oil, but in the end she is bitter as wormwood, sharp as a two-edged sword” and “Her feet go down to death; her steps follow the path to Sheol” (Prov 5:3-5). Solomon used the word wormwood as something that leads to a bitter ending. The “forbidden” woman is obviously someone who the man is forbidden to have sexual relationships with but he does it anyway and it could well lead to sexually transmitted diseases, divorce, and even death (Sheol). That’s a very bitter ending as a two-edged sword can be fatal. The Hebrew word Solomon uses is “la`anah” which means “bitterness.” Jeremiah uses the same, exact word when he writes “He has filled me with bitterness; he has sated me with wormwood” (Lam 3:15). Jeremiah uses the word bitterness and wormwood interchangeably. The only other author in the Old Testament to use this word is Amos, and speaking for God to Israel, he writes, “Seek the Lord and live, lest he break out like fire in the house of Joseph, O you who turn justice to wormwood and cast down righteousness to the earth” (Amos 5:6-7) and in Amos 6 where God tells Israel, “you have turned justice into poison and the fruit of righteousness into wormwood” (6:12). In every case where it is used, the authors of the Old Testament used wormwood in association with bitterness and this lead to a bitter ending, every time. 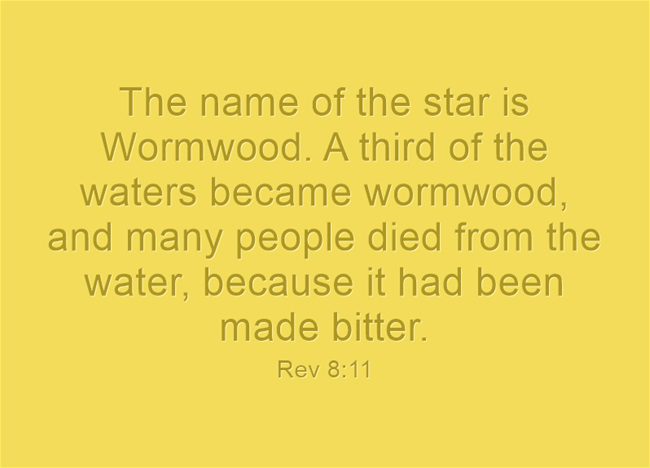 Wormwood is the name of a plant and of the bitter-tasting extract derived from it and that is what the judgment of God will taste like to everyone who refuses to repent and trust in Christ. It will be the bitterest of things to swallow and the bitterest of all endings because it is without end as John writes; “the smoke of their torment goes up forever and ever, and they have no rest, day or night, these worshipers of the beast and its image, and whoever receives the mark of its name” (Rev 14:11).

December 27, 2015
How Can I Avoid Being Left Behind When The Rapture Occurs?
Next Post

December 27, 2015 What Is The Whore Of Babylon In The Book Of Revelation?
Recent Comments
15 Comments | Leave a Comment
"Hi Cody. I just want to check on you to see how you're doing. :> ..."
Mish Top 7 Bible Verses To Help ..."
"Yeah and you are a God hater! End of story for you, and you will ..."
believe1009 What Does Oppressed Mean? A Biblical ..."
"Why, if Jesus did not die for negroes does the bible say in John 3:16 ..."
John Arthur Top 7 Bible Verses About Rapture ..."
"Do you hold to British Israel theory?"
John Arthur Top 7 Bible Verses About Rapture ..."
Browse Our Archives
get the latest from
Christian Crier
Sign up for our newsletter
POPULAR AT PATHEOS Evangelical
1